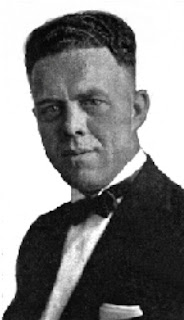 Herbert Francis Voorhees was born in Beloit, Wisconsin, on July 8, 1889, according to his birth certificate at the Wisconsin, Births and Christenings Index at Ancestry.com. His parents were John Voorhees and Katie Monahan.

The 1900 U.S. Federal Census recorded Voorhees as the second of five children. The family resided in Beloit at 623 Hackett Street. Voorhees’ father was a carpenter.

Voorhees’ childhood was mentioned in the sign-writing magazine, Signs of the Times, September 1923. The article, “Who’s Who in the Craft: H. F. ‘Bert’ Voorhees”, was transcribed at SignWeb:


“I was born in Wisconsin which is known as the biggest cheese state in the union. I was no more than a day when my Uncle Amos, who was staying with us at that time, looked down in the clothes basket where they had me and said, ‘We will hear from that boy some day.’ And they did. That night. They tell me that I cried as though my little clothes basket would break. Some of the neighbors suggested giving me a rattle. But my mother told them that I had contracted a cold during the night, and already had a little one in my throat. From there I went to high school. I did not do so very well there, being stung by a spelling bee at the foot of my class. I used to hang around the sign shop in our town; but father said, ‘You can’t be a sign painter—you ain’t no artist.’ Well, things went along like that until one day my father wanted a door painted. I got him wrong, I guess. He wanted it white, and I gave him a nice coat of black. He was pretty well peeved about it, and told me to go and never darken his door again. So I came to Chicago.”

The 1910 census listed self-employed sign writer Voorhees and his brothers, Arthur (photographer) and Walter (electrician), in Chicago at 1801 Warren Avenue.

On June 5, 1917, Voorhees signed his World War I draft card. His address was 5529 Kimbark Avenue, Chicago. He was a sign-writer employed by the Thomas Cusack Company. Voorhees named his wife as his nearest relative. He was described as tall, medium build with blue eyes and dark brown hair.

In 1920, Evanston, Illinois was Voorhees’ home town. His wife and brother, Walter, were in his household at 201 Ridge Avenue. Voorhees’ occupation was advertising artist.

The September 1923, Sign of the Times, mentioned some of Voorhees activities:


Besides being a signist of the quality type on the staff of the Osgood Sign Co., Chicago, Mr. Voorhees is attracting much attention in his clever caricatures in a national “strip” being syndicated in the daily newspapers. He is doing comic art reviews of several theaters in Chicago and is a staunch member of Local 830.

The Rockford Register-Republic (Illinois), September 1, 1923, reported the upcoming marriage of Voorhees’ sister, Dorothy, and said: “…The bride’s brother, Herbert Voorhees of Chicago, will give her in marriage at the altar.”

According to American Newspaper Comics (2012), Voorhees produced the strip, Jack and Lil, which appeared from 1927 to 1928, for the John F. Dille Company.

Voorhees has not yet been found in the 1930 census.

In the 1940 census, self-employed, commercial artist Voorhees resided in Chicago at 846 Montrose. His wife was not listed but the children, Bob and Nancy were named. Bob was also a commercial artist.

On April 27, 1942, Voorhees signed his World War II draft card. He and his daughter, Nancy, lived at 6214 Winthrop in Chicago. Voorhees was employed at the painting company, N. J. Bohl, 5312 Broadway, Chicago.

The Rockford Register-Republic, November 8, 1951, reported the upcoming wedding of Voorhees’ daughter, Nancy, who had been living with her uncle and aunt, Mr. and Mrs. W.B. Doran, in Rockford. Voorhees was still a Chicago resident.

The whereabouts of Voorhees, in the late 1950s and early 1960s, was found in the files of the Investigation of the Assassination of John F. Kennedy, Volume 25, 1964. Voorhees was interviewed by the FBI regarding a possible close encounter with Lee Harvey Oswald in Mexico. Voorhees had traveled by train to Mexico where he lived part-time for several years. Coincidentally, Oswald traveled to Mexico around the same time as Voorhees, who was questioned about a particular trip and asked to identify a photograph of Oswald. The eleven-page FBI report can be read here. The National Archives has the Oswald file here. 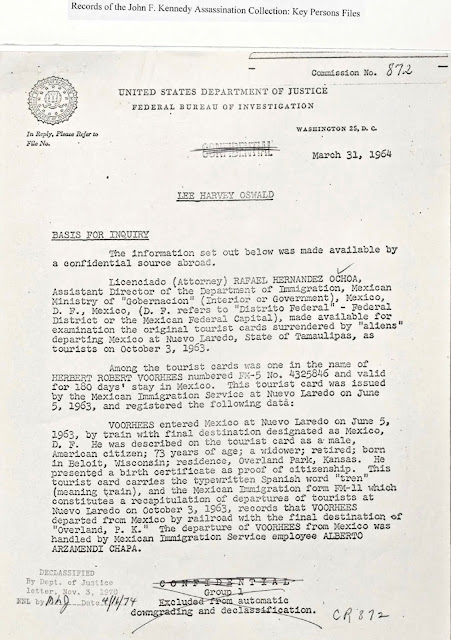 According to the Social Security Death Index, Voorhees passed away February 1968. His last known residence was Addison, Illinois.