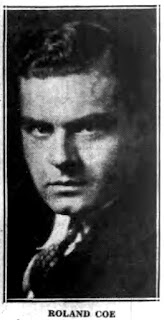 Roland R. Coe was born in Havana, Illinois, on May 24, 1907, according to a profile, by Carl Robert Coe, at Find a Grave. An obituary in the Springfield Union (Massachusetts) said the birth year was 1906.

In the 1910 U.S. Federal Census, Coe lived with his parents and paternal grandmother in Chicago, Illinois at114 East Ohio Street. His father was a painter for an advertising company. According to the family tree, Coe’s father died in 1918.

In The Saturday Evening Post, February 2, 1944, Coe said. “I was born in Havana, Illinois, a town of some 4000 inhabitants on the east bank of the Illinois River. Showboats docked at the foot of Bridge Street several times every summer, and when I was twelve years old I fooled around with the trap drummer’s equipment on the same boat, the Golden Eagle, during the intermissions between dances on an excursion trip to Peoria.”

The 1920 census recorded Coe, his sister and mother in her brother’s household in Havana, Illinois at 429 South Pear Street. Coe’s mother married William Mansfield who moved the family to Hamburg, New York. 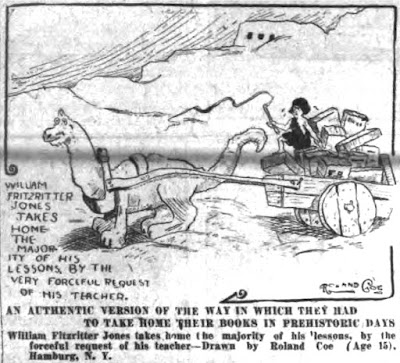 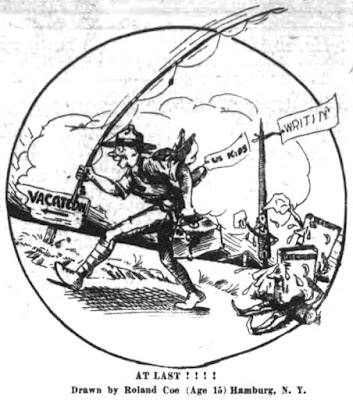 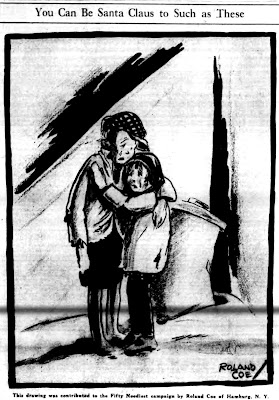 Coe returned to his alma mater to speak about cartooning. The Independent, May 31, 1928, carried the report by Evelyn Kappus, class of 1929.

He said, “There are several kinds of cartoonists. Among these, the new political cartoonist is not readily considered because of the experts in that field. The human interest cartoonist is jumping to high honors. Unless one has shown ability to dramatize humorous situations or visualize ideas strongly he had better not attempt this branch of newspaper work.

The Chicago Tribune takes the lead in this line with about fifteen cartoonists of national reputation and many others of promising ability. Their work is done several months in advance and sent to the different parts of the county so that it will appear everywhere at the same time.

Mr. Coe expects to go to Chicago soon to continue his work.

Beginning in 1928, Coe was a regular contributor to the monthly, Town Tidings, the Magazine of Western New York.

According to the 1930 census, Coe resided in Hamburg, New York at 201 Scranton Road. His step-father was a laborer for a steel company; his mother and sister were unemployed. Coe was an artist with an advertising agency.

Coe was a member of the Artists’ Guild of Buffalo which held exhibitions. The Buffalo Courier-Express (New York), October 19, 1930, reported the upcoming show.

The second annual exhibition of commercial art given by the Artists’ Guild of Buffalo in conjunction with the Greater Buffalo Advertising Club, will be held at the Sutler Tuesday to Thursday.

The exhibit will comprise work in all mediums for both newspaper and magazine advertising, and will form a representative display of art available m Buffalo to advertisers and those Interested in the graphic arts. Gordon Aymar, advertising art director of New York, will view the work in order to compare it with that produced in other cities.

The Courier-Express, May 1, 1932, said Coe was chosen to illustrate Edwin K. Gross’s novel, Samuel Wilkeson’s Buffalo, “the first fiction treatment of an episode in the history of this city.”

The Independent, January 24, 1935, noted two examples of the success with roots in the high school yearbook.


Several years ago Dan Van Pelt, upon being given a camera for Christmas, undertook the position of photographic editor. He did such an excellent job—that he took up the work after leaving high school and he is now assistant to the photography teacher at Seneca Vocational School in Buffalo.

Then there is also the story of Roland Coe, the Hamburg boy who drew such excellent cartoons for the yearbook of 1925. He continued along the same line and is now drawing for “The Saturday Evening Post” and “Colliers”.

It may, therefore, be seen that the annual occupies a well-recognized position in the school curriculum and acts also as a medium for better acquainting the community with the workings of the school.

The September 19, 1935 edition of the Independent highlighted this item:

Winchell Praises Coe
In his column of Sept. 14, Walter Winchell discussed the successes of cartoonists and caricaturists. Among those to whom he gave praise was Roland Coe of Hamburg and New York City.

“Roland Coe is a cripple, and his success story is a record of surmounting innumerable obstacles,” Mr. Winchell wrote.


Former Buffalo artist first president of cartoonists
We have with us all kinds from John L. Lewis, champion of industrial unions to Robert Montgomery who captains the glamorous hosts of Hollywood in the Screen Guild. Now a new leader arises, Roland Coe, former Buffalo newspaper cartoonist, to fight the battles of his brother artists as first president of the Cartoonist Guild of America.

So far most of the editors have signed the Guild contract agreeing among other things to a minimum price per drawing and of the guild.


“Since I started drawing the Little Scouts cartoons for the Post,” he says, “I’ve had the opportunity of becoming more or less active in scouting again. I’m one of the committeemen of Troop 502 in South Amherst…

When he was a kid himself, Roland Coe was a member of the Lone Scouts—later merged with the Boy Scouts—an organization founded by W. D. Boyce, a Chicago publisher. Mr. Boyce published the magazine, Lone Scout, for boys, and later, boys ran and edited it, with a little adult supervision. Mr. Coe did his first cartoons for this lively publication.

During the mid-1940s, according to American Newspaper Comics, Coe produced advertising comics for Wheaties, and Nabisco Shredded Wheat which was called His Nibs. (more samples here. 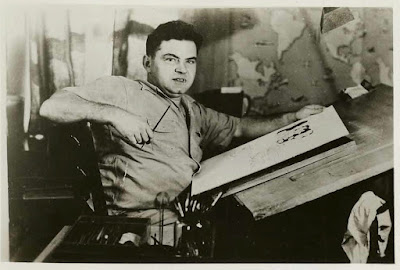 Coe passed away February 21, 1954, in Amherst, Massachusetts. His death was reported the following day in the Springfield Union:

Illinois Native
He was born in Havana, Ill., May 24, 1906, and graduated from the Hamburg High School at Hamburg, N.Y.

From 1937 to 1942 he was associated with The New York Post and made his home at Westchester, N.Y.

In 1942, he came here where he had been prominent in civic affairs, especially in the work of the Boy Scouts for which he has been nationally honored.

His cartoons, “Little Scout,” have appeared regularly in Collier’s and The Saturday Evening Post.

He was a member and former trustee of the South Congregational Church. He was also a member of the National Cartoonists’ Society.

He is survived by his wife, the former Miss Doris Judd, whom he married at Buffalo, N.Y., on July 5, 1937. He also leaves three sons, Peter, Stephen, and Norman Coe, all at home; his mother, Mrs. Winslow Mansfield of South Amherst and a sister, Mrs. James Stanton of Avondale, Ariz.

Memorial services will be held Tuesday at 2 p.m. in the South Congregational Church in charge of the Douglass funeral home. Rev. Arnold Kenseth, pastor of the church and Rev. Louis Toppan of Bristol, N.H., a former pastor, will officiate.