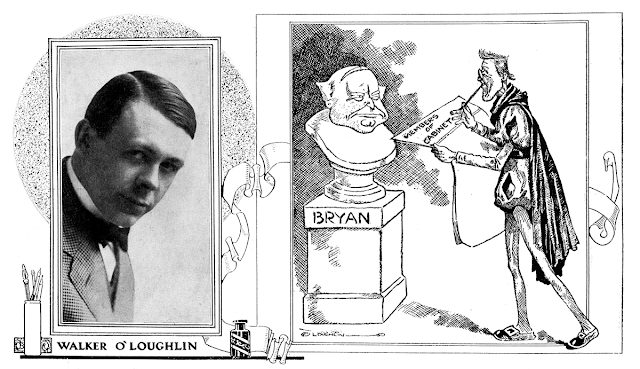 O'Laughlin of the Portland Telegram
(reprinted from Cartoons magazine, February 1913)

That impatient lady known as Miss Opportunity, who, peevish at the slightest delay, flits away unless there is an immediate response to her knock, led Walker O'Loughlin a merry chase, but he was an alert young man and the faintest tapping always found him hurrying to open the door.

Mr. O'Loughlin is the cartoonist of the Portland Evening Telegram, but the numerous visits of Miss Opportunity made him travel a round about path to reach his goal.

Born in St. Catherines, Ontario, he was still a child when his parents moved to Niagara Falls, N. Y. There he attended school, and, as soon as he was old enough, was required to spend his spare time in his father's drug store, the parental desire being that the boy should learn the drug trade.

At an early age the boy began putting in more time around the newspaper offices than in the drug store, so the father seeing that the drug idea did not appeal to the son, re­luctantly allowed the youth to have his own way and become a reporter.

While he was still a cub Miss Opportunity knocked. The moving pictures of the Corbett-Fitzsimmons fight were coming east and O'Loughlin, still a boy, formed a partner­ship and secured the eastern rights to the pictures. He lectured as the films were projected on the screen.

When the pictures played out young O'Loughlin heeded another tapping and joined one of the racing teams of a well-known eastern bicycle firm. When interest in the racing game died he was offered an opportunity to go on the stage and appeared in a black face and tramp stunt in vaudeville.

He was in New York City when the war broke out and cancelling his theatrical bookings he enlisted for military service. He was mustered out when the war ended without having seen active service in the field.

Returning to New York he became deeply interested in cartoon work. Miss Oppor­tunity was knocking again. He had no art education but he had the time to put in on pen and ink drawings and he went at it. In a short time he was able to do good enough work to secure a place with an advertising firm and as the quality of his drawings improved he developed into a newspaper artist. In New York he did free lance work in general, con­tributing to the newspapers and to Judge and Life.

Three years ago he became dissatisfied with this life in New York, or the desire to see the country moved him, and he started west. Miss Opportunity brought him into Salt Lake City when there was a vacancy on the art staff of the Salt Lake Telegram.

He remained in Salt Lake one year and then received an offer from the Portland Eve­ning Telegram to do sport cartoons. His work on the sport-pages was too good to be con­fined to that section of the paper and he is now the cartoonist of the Telegram.

His comparatively brief term on the Telegram has proved him one of the foremost art­ists of the country and his best work lies in front of him.