Walt McDougall's This is the Life: Chapter 4 Part 2

This is the Life!

Chapter Four (Part 2) - THE STREET OF A THOUSAND SINS


Those were the Steamboat Days. To every little bayside park and grove ran whole fleets heavily loaded, and the average city dweller then was intimately acquainted with the geography of parts as remote as Port Jefferson or Bridgeport, knowledge that was lost to the next generation until the bicycle opened up the world anew. Other fleets took rotund and stolid citizens far out to sea off Long Branch, where they fed expensive pink bloodworms to bergalls and toadfish for seven hours with an enormous consumption of beer. Other fleets, I know not how many, competed for the Hudson River traffic by day and night. I recall once that during a most bitter warfare I traveled to Albany for twenty-five cents, spent a lovely day, and meditated remaining for another, but strolling down to the wharf, where two boats were about to start for New York, I hit the very apex of the "Steamboat War." I heard a hoarse voice grate out an announcement, "Free trip to New York!" and its instant echo, "Same price here!" and I walked aboard the palatial steamer. I think it was the Daniel Drew. Nobody followed me, and in a few minutes we were racing down river. Last summer, when I paid over six dollars for the same privilege, the recollection gritted.

These flocks of steamboats were a constant menace to canoeists, who were regarded by their pilots as marine vermin to whom the navigation laws did not apply. As a large part of my spare time and that of my chum, George Baxter, a jeweler whose secret aspirations toward the ministry prevented him from acquiring the proper language of the sailorman, was spent on the waters surrounding New York, I naturally developed a gift of direct and pointed self-expression that was valuable later. I also discovered that canoeing literature was rather salable. It was not until '83 that I felt confident enough to devote my efforts solely to Art and Literature.

One day my brother remarked that "they'd be making artificial eggs next!" This led to cogitation, and as a result I wrote a couple of columns describing the manufacture of artificial eggs by a Newark concern, giving an imaginary formula for their construction precise in every detail, as well as many other particulars that gave added verisimilitude to the article, and then I took it to Amos Cummings, the editor of the Sun. To my unbounded delight, it was printed next day, and with my name signed to it, an unusual circumstance. I received fourteen dollars for the story, and I decided that Literature should be my stepmother from that day forth.

Letters began to pour in upon me containing money and stamps from produce-dealers, boarding houses and hotels, all wanting samples of the artificial eggs. My mother compelled me to return the money, and that hurt, but I was rewarded when a well-known dye concern offered me a hundred dollars for the use of the article in a small booklet advertising Easter-egg colors.

During the next three or four years, Baxter and I voyaged in our dainty, mahogany-decked craft some thousands of miles. Our favorite cruising ground was Long Island Sound, although we reached the Lakes via the Hudson and the Mohawk, ran the rapids of many rivers, did the Chesapeake region via the Elk River canal, and once sailed to Boston. Lincoln B. Palmer, afterward editor of Rudder, and Paul Butler, the son of General Benjamin Butler, were as ardent salt-water sailors as we, Palmer being the most expert canoe-handler I have known. There is not a nook nor cove along the Long Island or Connecticut shore from Sand's Point to Montauk or from the Thames River to the Raritan in which we have not at one time or another anchored our craft. Everywhere and always I wrote about the joys of canoeing. Thereby hangs another tale of conceit and vanity rudely handled.

I had been asked by a canoeing friend to act as judge of a race near Perth Amboy, and took the train attired in immaculate white flannels. When I arrived at my friend's office it was closed, and there I was, all dressed up with nowhere to go, and without even a porch to shelter me from a storm even then splashing down ominous drops. In desperation I darted for a flagman's shanty beside the railroad track, taking refuge just as the downfall came. When the old flagman came, he was soaked. I had observed, by then, with some surprise and elation, that the interior of his shanty was covered with pictures from the World, nearly all of them being my own cartoons and sketches. This circumstance argued that my host was not only an intelligent, cultivated man, but a discriminating one as well. Not content with this assumption, and moved by mere petty vanity and a desire for empty praise, I remarked:

"I perceive that you are an admirer of newspaper pictures, but you seem to have collected only those of one artist."


"That's right!" he replied with real enthusiasm, regarding me with interest. "I keep every one of McDougall's pictures. He's the greatest cartoonist that ever lived!"

I fully agreed with him, but I said, summoning a faint blush: "I can't subscribe

"What McDougall? The cartoonist?" he demanded sharply.

"The same," I breathed modestly.

His cold blue eyes surveyed my white flannels, my dinky sailor hat, and my buckskin shoes with chilling, corroding contempt, even disgust, but he uttered no sound. The rain poured down in thundering torrents for an hour, and I was compelled to sit there and wither. I grew smaller and smaller until I felt that soon I could slip out under the door. Several years passed in a glacial polite silence, and then suddenly the storm ceased and out flashed the sun.

I crawled out, wordless, and many months older, to find my friend Kitchell, who had been held up by the rain, in a buggy before his office. I crept to him, a broken man. A few minutes later, on our way to the canoe club, we had to drive past the little shanty adorned with my masterpieces, and balm was administered to my wounds. The old flagman came out and spoke to Kitchell, who all unwittingly administered the soothing ointment.

"Hello, Sam!" he said to the still affronted man. "Mr. McDougall tells me he's been spending an hour with you. I'll bet you've had a swell time if you made him talk to you. Git ap!"

Over the face of the art-loving flagman came the evidence of conflicting, various emotions—one of those transformations which one rarely has a chance to study—but the horse trotted off before I garnered other than a mere hint of his feelings. Kitchell told me afterward that whenever he felt especially mean he used to go to the shanty and rub gall and wormwood into its occupant, the poor man who could not, nor could many others, conceive that a great philosopher, sage, prophet and humorist could wear white flannels instead of long gray whiskers. 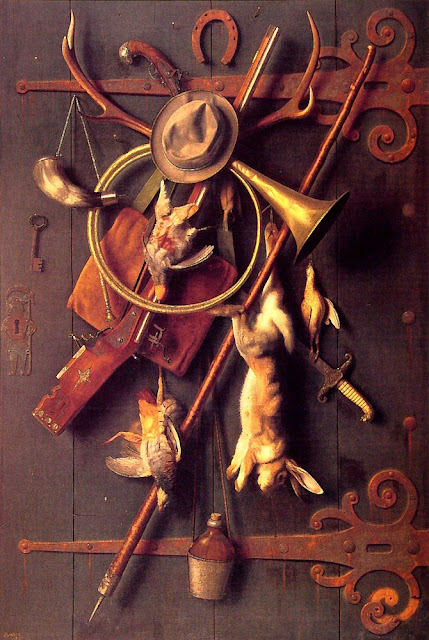 Probably the downtown center of High Art was Stewart's saloon on Warren Street, which seems to have held as many notable paintings as the Academy of Design, or, at least, it did after spending some hours there. Here was displayed Billy Harnett's bit of verisimilitude. The picture represented an old battered nail-studded door upon which were hung an old hat, a powder horn, a rabbit and other game so perfectly painted that, all day long, men stood before it in the blaze of electric light and disputed which portions of the picture were painted and which were real nail-holes, hinges, keyhole-escutcheons and the like.

Harnett could paint a dollar bill or a postage stamp so faithfully that one would try to pick it from the canvas. One day my brother met me and asked me if I had seen "Billy's" nude at the Academy. It was worth going up for, he declared. I took the trouble, as I was rather doubtful of Harnett's rendition of nude flesh, only to find that the picture was that of a dressed turkey hanging from a kitchen door!

Labels: McDougall's This Is The Life