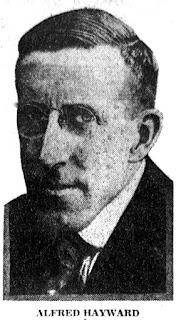 A. E. “Alfred Earle” Hayward was the cartoonist name of artist Alfred Mark Hayward, who was born in Camden, New Jersey, on February 14, 1885. The birth date was on Hayward’s World War I draft card which had the name “Alfred Earle”. The birthplace was reported in the Philadelphia Inquirer (Pennsylvania), July 27, 1939. The Encyclopedia of American Biography, Volume XI (1940) had the same birth information and an explanation of Hayward’s two names.


It was a notable fact that Mr. Hayward used two names professionally: “A. E. Hayward” on the comic strips, and “Alfred Hayward” on his serious work. He thus maintained two artistic personalities, separate and distinct from each other. It was his belief, stated in so many words, that “there is no such animal as a comic artist. He said that “humorous newspaper stuff...is purely literary in conception and has nothing to do with art.”


Mr. Hayward was born February 14, 1885, in Camden, New Jersey, son of Albert Joseph and Elizabeth (Henley) Hayward, both natives of England. his father was an artist, noted for his paintings in his native land. The Haywards are a family of artists, Mr. Hayward’s grandfather having also been a painter and his uncle a sculptor.

The 1900 U.S. Federal Census recorded Hayward (as Alfred M.), his mother and older sister, Bertha, in Philadelphia at 949 North Twelfth Street. Hayward‘s occupation was clerk The Encyclopedia said he was “a receiving clerk in a locomotive works, and he learned to do this work well.”

A 1901 Philadelphia city directory listed Hayward as “Alfred M.” and his occupation as salesman. The home address for Hayward and his mother was “N Warnock n Nedro.”The Inquirer, August 4, 1901, printed the death notice for Hayward’s mother.


Hayward—On August 3, 1901. Elizabeth Hanlon Hayward of Leamington, England, and widow of Alfred J. Hayward, in her 59th year. Due notice of the funeral will be given from her late residence, Fern Rock, Pa.

According to the Encyclopedia, Hayward, who had a public school education, found a job as a special writer for the Philadelphia Bulletin, writing and illustrating his human interest stories for several years. He went on to study at the Pennsylvania Academy of Fine Arts in Philadelphia. His first academy show was in 1915, and in 1919, the Dana medal was awarded him for his watercolors at the academy’s annual exhibition. Hayward eventually joined the academy faculty.

Hayward has not yet been found in the 1910 census. The 1910 Philadelphia city directory listed “Alfred E Hayward” as a cartoonist whose home was at 1205 Belmont Avenue. Hayward had two listings in the 1912 directory:

The 1916 directory had these two listings:

On September 12, 1918, Hayward signed his World War I draft card. His address was 659 E Penn, Philadelphia. His occupations were cartoonist and painter. The New York Herald was his employer. Hayward named his wife as his nearest relative. His description was tall and slender with blue eyes and brown hair.

The Evening Public Ledger, December 4, 1919, reported Hayward receiving the Dana medal award for his watercolors; Looking Down on the Pools was published in the paper. The Public Ledger said his studio address was 200 South Fifteenth Street. Three days later the Inquirer identified Hayward as a local cartoonist who was awarded the medal.

Hayward has not yet been found in the 1920 census. Hayward, his wife and daughter, Joyce, returned from Europe on September 26, 1926. He used the Public Ledger newspaper as his U.S. address.

In 1930, newspaper artist Hayward and family resided in the household of Joseph Ryan who was his brother-in-law. The address was 6642 18th Street in Philadelphia. Shortly after the census enumeration, Hayward traveled west. The Ogden Standard-Examiner (Utah), October 24, 1930, published this item:


Making Utah VisitSalt Lake City, Oct. 24.—From locomotives to cartoons has been the working experience of A. E. Hayward, New York, syndicate cartoonist, a visitor here for a few days. In [illegible] Mr. Hayward was a receiving clerk in a locomotive works at Philadelphia. Hayward draws the strip, “Somebody’s Stenog.” When he is not cartooning Mr. Hayward is painting landscapes to the Indian regions of Arizona and New Mexico.


…Mr. Hayward was fond of nature, particularly of mountains. He did a great deal of climbing on the tortuous mountain roads in France and in the American Rockies, delighting especially in the magnificent and almost unending views across the New Mexican mountain country. His adventurous and explorative soul sought also the mountains of Newfoundland and Labrador, New England, Pennsylvania, Colorado, Wyoming and Montana.

At some point, Hayward moved to New York City where he passed away July 25, 1939. The Inquirer, July 27, 1939, published the Associated Press obituary:

He created the comic strip “Somebody’s Stenog,’ which has been running for 21 years.

(“Somebody's Stenog” has appeared in the Sunday edition of The Philadelphia Inquirer.)

Native of Camden
A native of Camden, N. J., Hayward was the son of the late Alfred Joseph Hayward, famous English painter. His wife, Stella, and a daughter, Joyce, an actress, survive.

Hayward was a former faculty member of the Pennsylvania Academy of the Fine Arts and a member of the Philadelphia Sketch Club. Among his better known humorous writings were “Great Caesar’s Ghost” and “Kernel Korn.”

He also was an experienced mountain climber.

The family announced there would be no funeral services. Cremation will take place tomorrow.