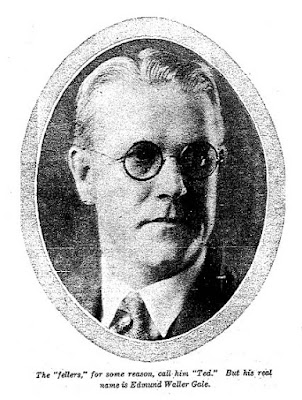 Portrait from The Daily Mirror

Edmund Waller “Ted” Gale Jr. was born in Corydon, Kentucky, on December 28, 1884, according to his World War II draft card.

In the 1900 U.S. Federal Census, Gale was the third of six children born to Edmund, a post office clerk, and Sue. They resided in Los Angeles, California at 215 North Hope Street. According to Edan Hughes’ Artists in California, 1786–1940, Gale graduated from high school and “was a self-taught cartoonist for the Los Angeles Evening News and for the [Los Angeles] Times from 1907.”

In the 1910 census, Gale continued to live with his parents at the same address. Gale’s occupation was cartoonist with the Times. American Newspaper Comics (2012) said Gale’s strip, The Wad Family, began in the Times on January 22, 1911 and ended in 1919.

In 1914 Gale appeared as himself in a Mack Sennett production, The Morning Paper. Mack Sennett’s Fun Factory (2013) said:


A visit to the Los Angeles Times plant to look at how an illustrated daily newspaper is produced, including cutting and engraving, typesetting on linotype machines, printing presses, and a view of the cartoonist “Gale” at work.

Cartoons Magazine, March 1916, published Dudley Logan’s drawing of Gale with the caption: “E.W. Gale, Who Has Left the Los Angeles Times to Draw a Comic Strip Entitled ‘Mr. Wad and His Family’ for the Wheeler Syndicate of New York.” 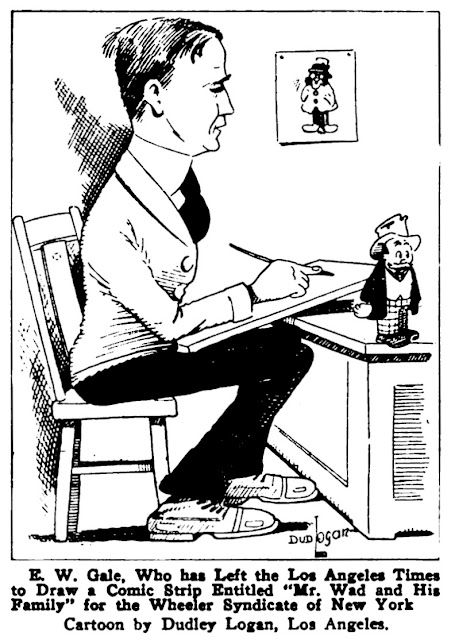 On September 12, 1918, Times cartoonist Gale signed his World War I draft card. He and his wife, Helen, resided at 208 North Grand Avenue in Los Angeles. The description of Gale was tall, medium build with light gray eyes and light brown hair. 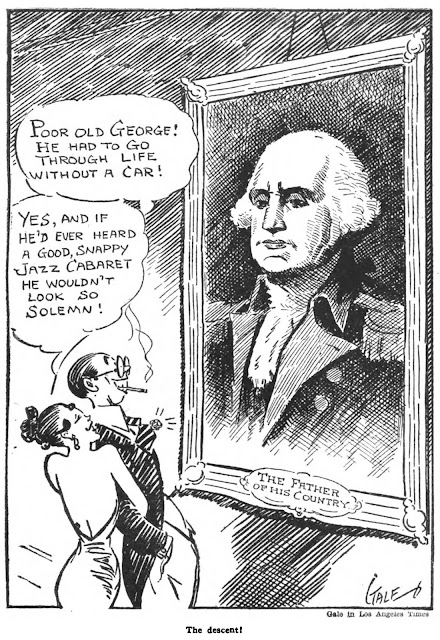 The 1930 census recorded Gale, wife and eight-year-old daughter, Phoebe, in Los Angeles at 3828 Ingraham Street. The Los Angeles Times blog has a Gale Christmas cartoon from 1932 and said, “he quit in 1934 in a dispute over editorial policies and went to the Examiner.”

Gale’s residence was the same in the 1940 census and on his World War II draft card which he signed on April 25, 1942. Gale stood six-feet tall and wighted 174 pounds.

Gale passed away September 4, 1975, in Los Angeles, according to the California Death Index at Ancestry.com.