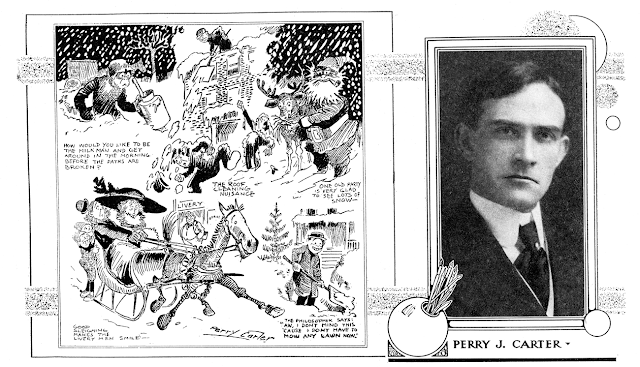 Carter of the Minneapolis Tribune 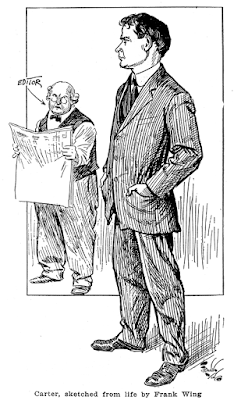 The experience of years has gained for Perry J. Carter, of the Minneapolis Tribune, a place among the best known cartoonists of the United States. For years his cartoons have been extensively copied in other newspapers and period­icals and as a result his work is known in all parts of the country.

''A very smart craftsman" is the terse but complimentary characterization of Mr. Carter made by the late W. T. Stead, while Dr. Albert Shaw, in an issue of the Re­view of Reviews, termed Mr. Carter's cartoons for that month "of higher average merit than those of any other cartoonist at home or abroad."

Mr. Carter's home is in the great northwest, where his name is a household word in thousands of homes. He has traveled extensively throughout the country, but no one has as yet succeeded in convincing him that there is a better place to live than Minneapolis and he has, so far, refused to avail himself of good opportunities in larger cities.

Mr. Carter was born in Ohio and gained his first newspaper experience in the humble capacity of "devil" in the village print shop where he worked when not in school. Having started in the newspaper profession he progressed along the inky way of printer and reporter until he finally was able to go to Chicago to study in the classes of the Art Institute. 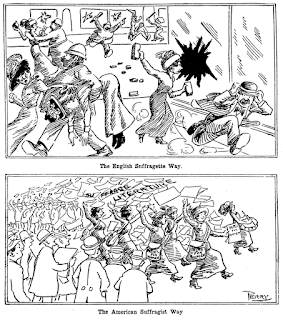 The keystone of his methods in cartoon making is that he combines an up-to-date quality of conception and treatment with the elements that made the cartoons of yesterday popular and effective. This happy combination is evident to even the most casual observer of his work, and, by his skillful blending of the old and the new he has maintained a popularity that is visibly increasing with each succeeding year.

Mr. Carter is a firm believer in the humorous style of cartoon being a medium for good. He delights in humorous drawing and while he is the author of some very pointed cartoons a malicious sting has never been found concealed in any one of them.

Mr. Carter is well known in the west, not alone as a cartoonist, but also as an en­tertainer. As the popularity of his cartoons grew there came an increasing demand from various parts of the northwest that he appear in the role of cartoonist-enter­tainer. He finally decided to attempt this, and for several years has been giving "chalk talks," using colored crayons in his work before a large easel.

Comments:
I came across an original drawing by Frank Wing And I was hoping you or someone could tell me more about it. I know the man in the drawing is H.C. Hotaling who was a Committeeman at the American Printer. Please let me know if this is a rare item because I can't seem to find any of Frank Wings original work at auction or anywhere.
I can email or post a picture of the drawing let me know where to send it to.
Thank you
Sean M.