John “Jack” Leo Gallagher was born in Philadelphia, Pennsylvania on October 24, 1879, according to his World War I and II draft cards. He has not been found in the 1880 U.S. Federal Census. Information about his education and art training has not been found.

In 1900, he was the oldest of five children born to Michael and Mary, both Irish emigrants. They lived in Philadelphia, Pennsylvania at 1630 Bainbridge Street. His father was a stonemason, and he was an artist. His birth information was recorded as “October 1878”. Gallagher’s comics career started in Philadelphia papers from 1904 through 1918. According to American Newspaper Comics, his strips, in alphabetical order are: Bear Creek Folks, Bugland, Bumppo the Bumper, Dusty Dinks, Farmer Judkins, Father and his Experiences aka Father and His Jobs, Fineheimer Twins, Forgetful Ching-Ching, Gasoline Gussie, Hank Hinkle, Hector the Inspector (below), Hippo and the Monks aka In the Jungle aka Elephant and the Monks, Kid Trubbel, Little Possum Gang, Mischievous Maggie and the Cheerful Kid, Plumbing Pete, Toddy Twins, and Torrid Teddy and Timid Tim. Many of these titltes he took over for other creators. 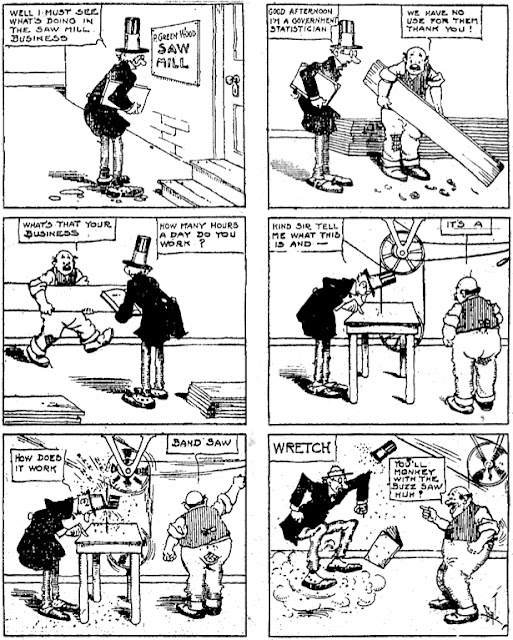 According to the 1910 census, Gallagher had been married six years to Helen. The couple and a son lived in Philadelphia at 6607 Greenway Avenue. His occupation was artist at a newspaper office. He signed his World War I draft card on September 12, 1918. A Philadelphia resident, at 1336 South 51st Street, he worked for “Harry L. Cassard, 764 Drexel Bldg. 5th & Chestnut, Phila Pa,” the address of Keystone Feature Syndicate. He was described as medium height and build with brown eyes and sandy hair.

According to Cole Johnson, Gallagher had lost both of his legs by the 1930s, perhaps to diabetes.

Gallagher’s home in the 1940 census was Philadelphia at 725 50th Street. He was an illustrator with a commercial art studio. He was self-employed when he signed his World War II draft card on April 22, 1942, and was at the same address. His office was at 815 Sansom Street in Philadelphia. An obituary or death notice for Gallagher has not been found.