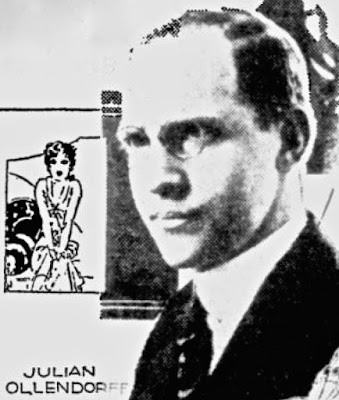 Julian Ollendorff was born in Brooklyn, New York, on June 14, 1881, according to his World War II draft card. Information regarding Ollendorff’s education and art training has not been found.

In the 1900 U.S. Federal Census, Ollendorff was the second of six children born to Max and Laura. His father was a wholesale sweater manufacturer. The family resided in Brooklyn at 572 Franklin Avenue. Ollendorff’s occupation was newspaper artist. A 1936 affidavit filed by Ollendorf said in part: “I have been an artist for the past thirty five years. My first experience was with the New York World in the year 1900.”

American Newspaper Comics (2012) said Ollendorff’s earliest comics series was Hapless Tower which ran from February 2 to April 13, 1902 in the New York Tribune. Ollendorff’s illustrations appeared in the Tribune and other papers such as the Indianapolis Journal and Evening Star. Ollendorff also illustrated stories in Leslie’s Monthly Magazine and Appleton’s Magazine. And he operated the Ollendorff School of Fashion Illustrating.

In 1910 the couple resided in Brooklyn at 478 Throop Avenue. Ollendorff was an artist at Siegel & Cooper. A 1913 Brooklyn city directory listed Ollendorff’s residence at 478 Quincy Street and studio at 23 East 14th Street in Manhattan.

The 1915 New York state census recorded artist Ollendorff in Brooklyn at 478 Quincy Street, which would be his home into the 1940s. Manhattan city directories for 1916 and 1917 listed Julian Ollendorff Studios at 41 Union Square West on the twelfth floor. The same address was on his World War I draft card which he signed September 12, 1918. His description was medium height and build with blue eyes and brown hair.

Ollendorff’s venture into film was reported by the Music News, June 25, 1920.

Folk Dances in Motion Picture
Hugo Riesenfeld has arranged with Julian Ollendorff, famous painter, to stage a series of folk dances in natural color motion pictures for presentation at the Rivoli, Rialto and Criterion theaters. Mr. Ollendorff will make the sketches for the dances and then engage well known dancers to execute them for the camera. Special music will be prepared for these scenes by Mr. Ricsenfeld himself. In several instances he expects to be able to have the originals appear and dance along with the picture, as Desha did with her bubble dance at the Rivoli a few weeks This latest deal by the director of the Rivoli, Rialto and Criterion is part of his plan to make the news weekly a more and more important part of his program. A weekly cartoon by Marcus, on important subjects, is one of the innovations that has become a fixture.

Ollendorff’s Sketchografs films were reported in many publications including the New York Tribune, July 31, 1921 and Brooklyn Life, August 6, 1921 (below).


Educational Films Corporation will release early in August the first of a series of unique one-reel novelties called Sketchografs. Each will tell a story in sketches, the moving pictures showing the actual drawing of the pictures. Julian Ollendorff, the producer and artist, manipulates a motion picture camera with his left hand while he draws the sketches with his right hand. “Play Ball!” is the first Sketchograf of the series. It tells the story, in humorous sketches, of the development of ball playing from the earliest days of the national pastime, based on a thorough study of the history of the game made by Mr. Ollendorff. “Eve’s Leaves” will be another Sketchograf to be released soon. In this picture Mr. Ollendorff presents the various developments in women’s styles, beginning with the well-known costume reported to have been worn in Eden.

Sketchografs were included in the Educational Film Exchanges, Inc. advertisement in the Saturday Evening Post, March 18, 1922.

Following Sketchografs, which ended in 1929, was Gloria for the Associated Press which launched a number of strips and panels on March 17, 1930. Editor & Publisher, February 8, 1930, announced the lineup. The Sarasota Herald (Florida) carried the comics and cartoons.

Olly of the Movies was Ollendorff’s longest-running strip, from January 22, 1934 to 1938. In Ollendorf’s affidavit he said:


During my fifteen years’ experience in the motion picture business I gradually became known in the trade as ”Olly” (an abbreviation of Ollendorff) and eventually as “Olly of the Movies,” and from this characterization I coined and originated a comic strip called “Olly of the Movies.”

This strip was primarily based upon my experience in the production of motion pictures, fictionalized and added to from my own imagination.

Ollendorff sued a number of businesses and people who produced the radio program, Molly of the Movies. The case can be read here.

Ollendorff’s last series was American Heroes for the U.S. Treasury Department. The panel ran in 1944 and 1945.

The exact date of Ollendorff’s passing is not known. The Florida Death Index at Ancestry.com has a Julian Ollendorff who passed away in 1952 in Dade County, Florida. Ollendorff’s filmography is here.