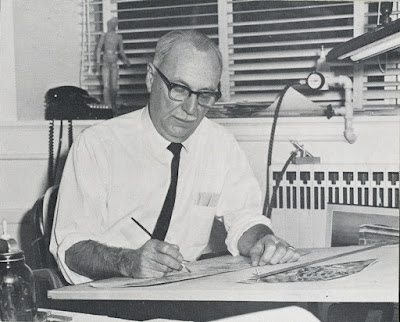 Alfred Joseph Buescher was born in Cleveland, Ohio, on February 21, 1903, according to the Ohio Births and Christenings Index at Ancestry.com. His parents were John F. Buescher and Elizabeth Blickhan. According to a family tree, Buescher’s mother passed away October 27, 1904.

In the 1910 U.S. Federal Census, Buescher was the second of three children. Their father was a carpenter and had remarried to Margaret. The family lived in Cleveland at 1223 East 82nd Street.

The family was at the same address in the 1920 census. Information regarding Buescher’s education and art training has not been found. A 1922 Cleveland city directory listed Buescher as a cartoonist at his parents’ address.

The 1925 Cleveland city directory listed Buescher as a Central Press artist who lived at 8987 Ann Court. The following year Buescher’s address was 3821 Glendale Road and he had the same occupation.

Buescher has not yet been found in the 1930 census.

American Newspaper Comics (2012) said Buescher drew the long-running series, Illustrated Sunday School Lesson. Newman Campbell was the writer. The strip began December 26, 1931 was initially distributed by Central Press Association and later by King Features Syndicate. With C.D. Vormelker, they produced Dickens’ Christmas Carol which ran from November 29 to December 25, 1937. During the 1950s, Buescher worked on several strips. He did supplemental art for the reissue of The Story of Stalin (1952). With Brick Bradford creator William Ritt, they did Once Upon a Christmas Eve (1953), Eski (1954) and In the Days of Davy Crockett (1955; with additional scripts by Rev. Alvin E. Bell).

According to the 1940 census, Buescher was a newspaper artist who resided in Cleveland Heights at 2207 Westminster Avenue. He had three children: Alfred (14), Joan (10) and Richard (7). In 1939 Buescher’s income was $5,000. His highest level of education was the third year of high school.

The New Castle News (Pennsylvania), May 1, 1978, announced the addition of editorial cartoons by Ranan Lurie. “Lurie is a craftsman in the art and he has won numerous awards for his editorial cartoons. Lurie will replace Alfred Buescher who is retiring after working for more than 40 years for King Features.” (Cartoons by Buescher.)

According to the Ohio Death Index, Buescher passed away September 29, 1999, in Mayfield, Ohio.