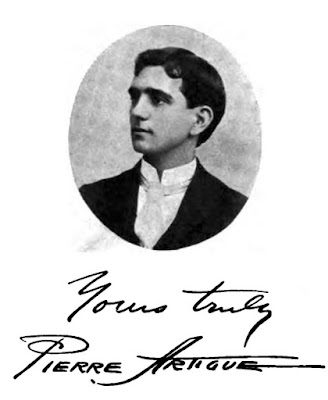 Pierre M. Artigue was born in New Iberia, Louisiana on May 5, 1872, according to a family tree at Ancestry.com and Edan Hughes’ book, Artists in California, 1786–1940.

In the 1880 U.S. Federal Census, Artigue was the oldest of three sons born to Louis and Leontine. Born in France, his father was a carpenter and mother a Louisiana native. The family resided on St. Peters Street in New Iberia. At some point, the family moved to California.

The Inland Printer, September 1899, published Artigue’s initial designs. He was a San Diego, California resident at the time.

A 1901 Los Angeles city directory listed artist Artigue at 510 North Bunker Hill Avenue. Artigue worked for the Los Angeles newspaper, Evening Express. The May 1901 issue of the Inland Printer reprinted his cartoon, “Events of the Week”, for the month of February that included Valentine's Day, Washington and Lincoln's birthdays, and Chinese New Year. 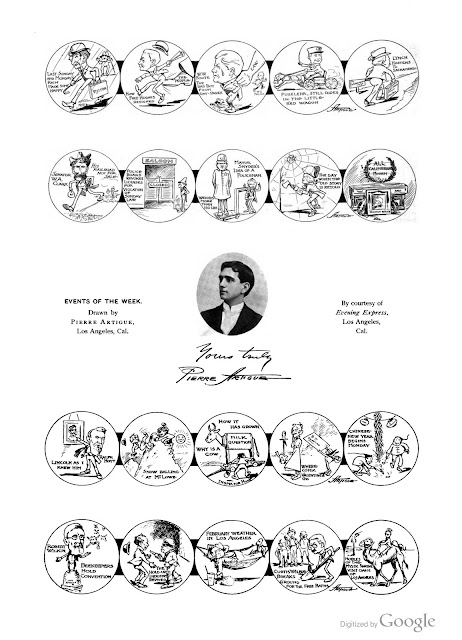 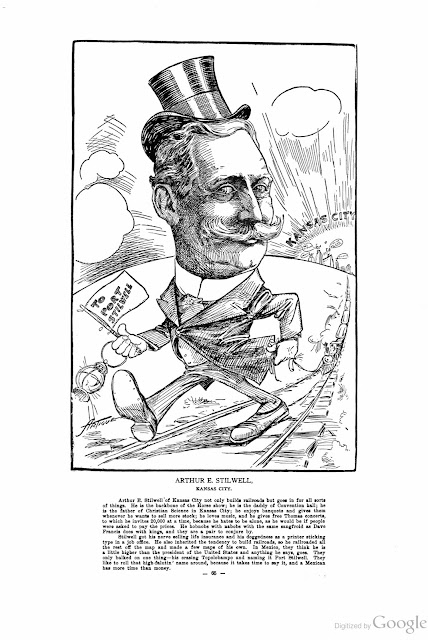 In the 1910 census, Artigue was married to Creta, and they lived in Kansas City at 3622 Tracy Avenue. The couple was married for eight years. Their five-year-old son, Louis, was born in Missouri. Artigue gave his occupation as “artist (pen & ink)” at a “newspaper office”. His mother-in-law, Adelaide J. Stocks, was also in the household.

The Rocky Mountain News, (Denver, Colorado), March 5, 1912, announced on the front page, above the masthead, that Artigue was joining the newspaper.


As a result of prolonged negations The News announces the engagement of Pierre Artigue as a member of its art staff. He will not come to Denver as a stranger, for his work in Life, Puck, Judge and other national periodicals has given him country-wide fame. It is confidently expected that Mr. Artigue will easily take rank as the foremost cartoonist and illustrator in the West, for not only does he possess cunning technique, skill draughtmanship, and the secret of caricature, he has also that note of strength that enables his work to rise above the merely comic, and strike deep to the very heart of feeling. Sir John Tenniel, the greatest cartoonist that ever lived, brought tears as often as he did laughter, and Mr. Artigue, by training and temperament, is fitted to do work that will arouse as well as amuse. By this engagement of Mr. Artigue, The News feels that it has rounded out its “all-star staff” in such fashion as to leave small room for further improvement.

Beginning on March 10, 1912, Artigue produced a strip, Mr. Want, that ran on the first page of the Sunday Small Ad Section. The strip also featured Mrs. Want and Little Want. Chris and Christena’s Courtship replaced the Wants beginning June 30 and ended on September 22, 1912.

On December 5, 1913 the San Jose, California newspaper, Evening News, printed one of Artigue’s editorial cartoons from the Kansas City Times. The September 9, 1913 Kansas City Star reviewed the Poster Show at the YWCA. Artigue's poster elicited this critique: “Pierre Artigue, 3731 Tracy Avenue, won honorable mention with one of the more pretentious exhibits of the show.”

Artigue returned to Los Angeles in 1914, according to Artists in California, and later joined the Cartoonists Club of Los Angeles. A 1917 Los Angeles city directory listed Artigue at 232 S Mariposa Avenue. His address in the 1918 directory was 145 South Norton Avenue, which was also recorded in the 1920 census.

According to the 1920 census, Artigue was an artist in the painting industry.


Pierre Artigue, artist and inventor, filed suit in the United States district court today against more than a hundred prominent motion picture companies and individuals for an accounting of millions of dollars alleged to have been saved by the producers through use of the so-called “glass shot” background principle which Artigue asserted was his invention….

…The “glass shot” principle involves a glass screen upon which is painted backgrounds for pictures and which is placed six feet before the camera and between the camera and a small portion of the background built to actual size. In the film the picture on the glass screen blends into the picture of the real background so perfectly as to be practically impossible of detection. Artigue alleged that he was the discoverer of the process and that patents were issued to him on April 6, 1918…. 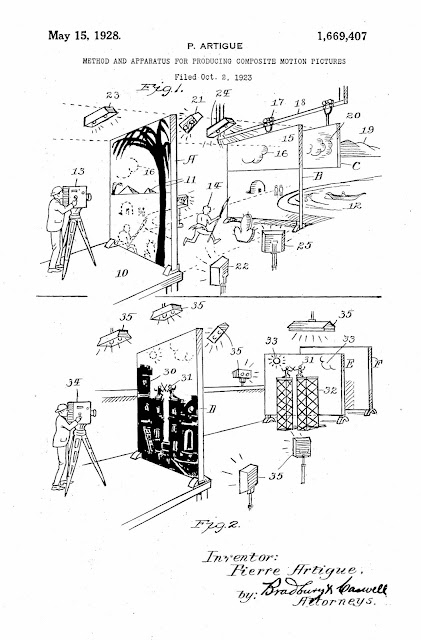 In 1930 Artigue was a newspaper cartoonist. He and his wife lived at 500 Arden Boulevard in Los Angeles.

UNLV University Library has two Artigue drawings of houses from the early 1930s here and here.

So far, there is no evidence Artigue worked for the Denver Post. Artigue was buried at Forest Lawn Memorial Park. His son, Louis, was also buried there.