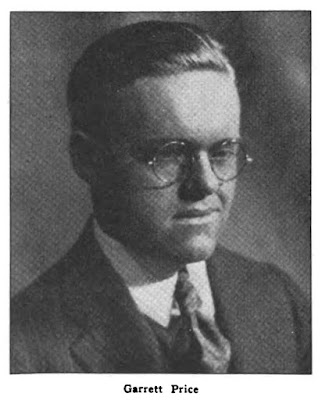 William Garrett Price was born in Bucyrus, Kansas, on November 21, 1896, according to his World War I and II draft cards (at Ancestry.com) which also had his full name. In the 1900 U.S. Federal Census, Price was the youngest of two sons born to Samuel F., a physician, and Lydia A. They lived in Saratoga, Wyoming. Price’s mother passed away before the next census.

In 1910, Price, his father and brother still lived in Saratoga. The New York Times, April 10, 1979, said Price grew up on a farm and sketched animals and people at a young age. 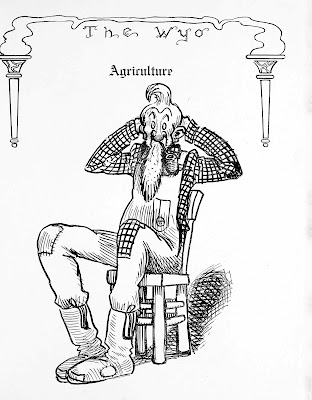 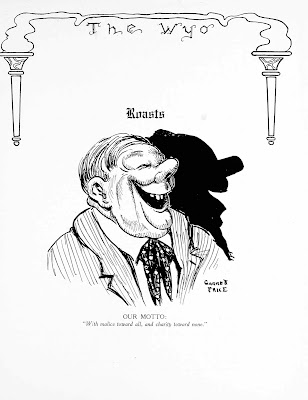 Agnes Wright Spring wrote about Price in her book, Near the Greats (1981):


Garrett Price attended the University of Wyoming and drew the little sketches for the WYO, the Junior Annual, which I edited.

As I remember him then, he was only a freshman. He was small and wore knee breeches. But we all recognized his drawing talent and sought his help with the WYO.

Later I saw Garrett when he was doorkeeper of the Senate during the Wyoming Legislature, when I was State Librarian.

Garrett Price left Wyoming to attend the Art Institute in Chicago and from there became a reporter-cartoonist for the Kansas City Star….

The Times said that during World War Price contributed drawings to Navy publications. Sara Duke, in Biographical Sketches of Cartoonists & Illustrators in the Swann Collection of the Library of Congress (2012), said Price was a news illustrator for the Great Lakes Navy Bulletin.

Price signed his World War I draft card on May 29, 1918. His address was 4321 Champlain Avenue in Chicago and his employer was the Tribune. He named his father as his nearest relative. Price was described as medium height, slender build with blue eyes and light brown hair. On July 9, 1918, the Tribune reported Price’s enlistment.


Garrett Price, for two years a member of The Tribune art staff, yesterday enlisted in the navy and immediately began his training at Great Lakes. Mr. Price is a native of Wyoming, but came to Chicago several years ago to study at the Art Institute. He became a member of The Tribune staff shortly after completing his studies at the institute and soon became one of the staff illustrators. Mr. Price is the 211th Tribune employe to go into his country’s service, and the fifth member of the art staff to enlist.

Price’s address and employer were the same in the 1920 census. Price was a roomer in the Spitzig household. About six months after the census, Price was mentioned in the Fourth Estate, July 31, 1920: “Garrett Price of the art staff of the Chicago Tribune is in the Michigan lake region on his vacation.”

In the mid-1920s, Price moved to New York City. Duke said Price was “a regular contributor to Harper’s Bazaar, Scribner’s, Stage, Collier’s, College Humor, Esquire and other leading magazines.” Price is perhaps best known for his cover artwork for the New Yorker magazine from 1925 to 1974.

Price married Florence Semler in 1928. They visited Europe. Aboard the S.S. Carmania, the couple departed Havre, France, on June 7, 1928 and arrived in New York City on July 16. Their address was 2 East 12th Street in New York City.

The 1930 census recorded Price and his wife, Florence, in Manhattan, New York City, at 308 West 8th Street. He was a freelance commercial artist.
In March 1931 Price and Florence sailed to Hamilton, Bermuda, which was her birthplace as recorded on the passenger list.

American Newspaper Comics (2012) said Price produced White Boy in Skull Valley, for the Tribune then the New York News Syndicate. The strip ran from October 1, 1933 to August 30, 1936. The topper was Funny Fauna which started October 20 or 27, 1935. (White Boy has been published as a book by Sunday Press and was reviewed here.)

In the 1940 census, freelance cartoonist Price resided at 1 University Place in Manhattan.

During July 1940, the “Wish you were here” advertisements, for New York Telephone, featured Price’s artwork. According to American Newspaper Comics, Price was one of several artist who drew the Calvert Reserve Whisky advertising panel, Metropolitan Moments, which ran in the 1940s. 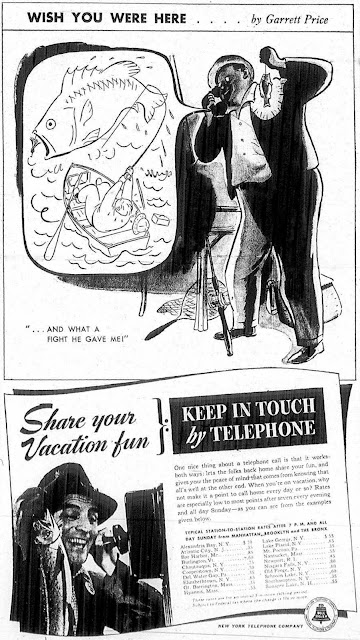 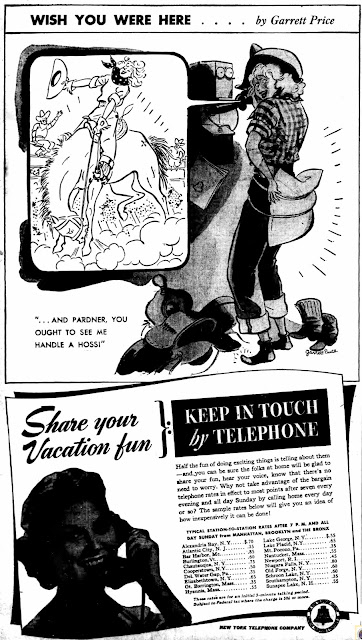 In 1946 a collection of Price’s cartoons was published in Drawing Room Only. Price illustrated David Stern’s book, Francis, which was published by Farrar, Straus & Co. in 1946.

During the 1950s and 1960s, city directories listed Price in Westport, Connecticut.

Price passed away April 8, 1979, in Norwalk, Connecticut, according to the Connecticut Death Index. Obituaries appeared in many publications including the Times, The Day and the Toledo Blade.