Richard Lippincott Denison Taylor was born in Fort William, Ontario, Canada, on September 18, 1902, according to Who’s Who in American Art, Volume 9 (1953). A family tree at Ancestry.com said Taylor was named after his father. Taylor’s early years and career were told in Current Biography Yearbook, Volume 2 (1941).


…[Taylor] was born in Fort William, Ontario, Canada, of English descent on his father’s side; Scottish-Dutch on his mother’s. As a child he was always drawing, and at 12 he began his formal art education “under a conservative landscape and figure painter, an associate member of the Royal Canadian Academy.” Later Taylor studied at the Ontario College of Art and the Los Angeles School of Art and Design. “No university education. No degrees. No honors.” Throughout school, he confesses, he was very dull in everything but history and literary composition, in which he got high marks; “had no mind whatever for mathematics or problems of any sort.”…

Taylor first began drawing cartoons in 1927 for the Goblin Magazine, a Toronto University publication which by that time had become a professional journal. He drew for it until it folded and then “lived precariously doing all sorts of commercial art in Toronto.” He painted in his spare time, successfully enough to exhibit with the Ontario Society of Artists and once with the Royal Canadian Academy, though he was never elected to membership in either body.

A record of Taylor’s first entry into the United States has not been found at Ancestry.com. The 1910 U.S. Federal Census recorded Taylor and his parents in Los Angeles, California at 4075 Normandie Avenue. Taylor’s father was a real estate agent. Sometime after the census, Taylor returned to Canada.

Taylor’s next entry into the U.S. was at Port Huron, Michigan, July 24, 1917, according to the border crossing card at Ancestry.com. Taylor was accompanied by his mother. In Canada, his address was 96 Pinewood, Toronto, Ontario. His destination was to “Intr. Janet Young, 113 Curtis, Alhambra, California”. Taylor later returned to Canada.

On October 7, 1919, Taylor passed through Buffalo, New York. He had left Toronto on his way to his father in New York City at 1133 Broadway.

In the 1920 census, Taylor and his parents resided in Manhattan, New York City, at 608–610 West 139 Street. Taylor’s father was a manufacturer in the poultry food industry. Taylor was an art student. After the January census enumeration, Taylor returned to Canada. Passing through Niagara Falls, New York, on September 30, 1920, Taylor was on his way from Hamilton, Ontario, to Brooklyn, New York, at Bridgewater Street and Meeker Avenue. His contact in Hamilton was “Aunt, Mrs. Povis Herkimer”. Once again, Taylor returned to Canada.

American Artist, February, 1946, published “A Visit to ‘Worm’s End’” by Ernest W. Watson who profiled Taylor and explained how he became a cartoonist for the New Yorker magazine.


Now we come to 1935 and a change in the Taylor fortunes. A friend had written a book entitled, Worm’s End, a sort of adult’s Alice in Wonderland. Taylor read the manuscript and, convinced of its merit, proceeded to make forty drawings for it. These he did somewhat in the manner of Tenniel who had illustrated Lewis Carrol”s famous fantasy.

The pictures completed, Taylor wrapped them up with the manuscript, headed for New York and the publishing house of Simon and Schulster. The manuscript, which Taylor still thinks is good, did not impress the publishers; but his drawings did. Clifton Fadiman, who was then with that firm, was particularly encouraging; he told Taylor he ought to be drawing for the New Yorker and he even offered to show the Worm’s End drawings to its editors.

Awaiting word from the New Yorker, Taylor spent a few cheerless days in one of Manhattan’s cheap hotels and then, hearing nothing, returned disheartened to Toronto. In a few days, however, hope was rekindled by the receipt of a letter from the magazine inviting him to submit cartoons. He lost no time doing so; during the next six months he devoted himself almost exclusively to the drawing of New Yorker cartoons which, distressingly enough, didn’t get into the New Yorker. He was about to give up in despair when a check for $15 revived the spark of hope that he has managed to keep alive all those months. He had sold a drawing, if only a small spot, to the New Yorker!

That was the beginning. Soon more checks, bigger checks began arriving, and Taylor came to the conclusion that he ought to be nearer the source from which all blessings flow. Accordingly, in 1936 he bade farewell to Canada and set himself up on Port Chester, New York, forty miles from Manhattan. There he married Maxine MacTavish, daughter of Dr. Newton MacTavish onetime critic and former editor of the Canadian Magazine. This was about the smartest thing Taylor ever did, “Max” casts a critical eye upon all his drawings and tells him what, if anything, is wrong with them. He considers her judgment infallible.

A travel document with the 1935 date has not been found, but there is a border crossing card that recorded Taylor’s arrival in Buffalo on June 3, 1936. His address in Toronto was 632 Church. The card said he had been in New York City from 1921 to 1922, and his destination was “The New Yorker Magazine”. 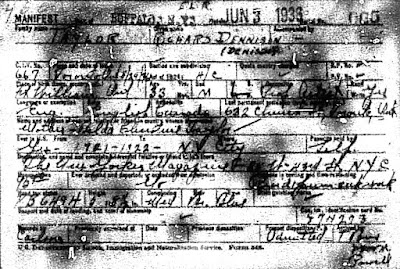 The 1940 census said self-employed cartoonist Taylor and his wife lived in Bethel, Connecticut at 38 Putnam Park Road. In 1935 Taylor was a Toronto resident. His highest level of education was the eighth grade.

Life magazine, April 22, 1940, reported on the cartoon show at Museum of Art at the Rhode Island School of Design in Providence. Taylor was one of 39 cartoonists in the show. Art Digest, December 15, 1940, mentioned Taylor’s solo show.

Humor of Richard Taylor
Readers of The New Yorker who take special delight in the bug-eyed characters drawn by Richard Taylor will get many a chuckle out of the large show of his unpublished drawings on view at the Walker Galleries in New York through Dec. 28. The exhibition provides a happy hour backstage with a deft draftsman whose eye for humanity’s foibles is sure and keen. His pen, dipped in just enough acid, pierces the very core of fatuousness, pomposity and other frailties of our characters.

Taylor helped paint and decorate his neighbor’s house as covered in the September 13, 1943 issue of Life. A few weeks later, Taylor and a self-portrait were published in Life, October 25, 1943. Life, November 27, 1944, showed selected cartoons from the books of Virgil Partch, Rube Goldberg, William Steig, Peter Arno, and Taylor. 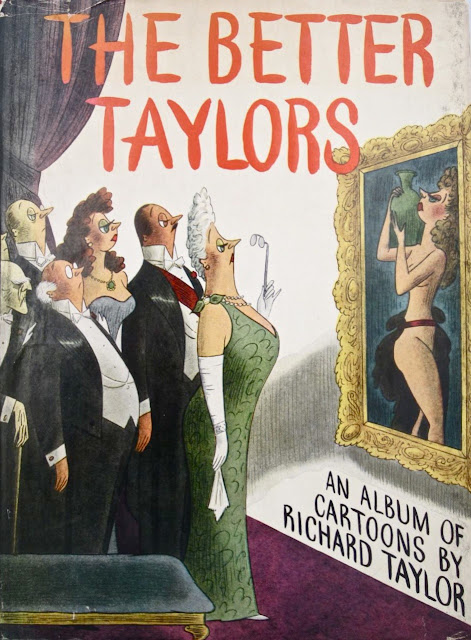 American Newspaper Comics (2012) said Taylor was one of several cartoonists and illustrators who worked on the Calvert Reserve Whisky advertising panel, Metropolitan Moments, during the 1940s. Samples of Taylor’s Mennen and Ry-Krisp advertisements can be viewed here. 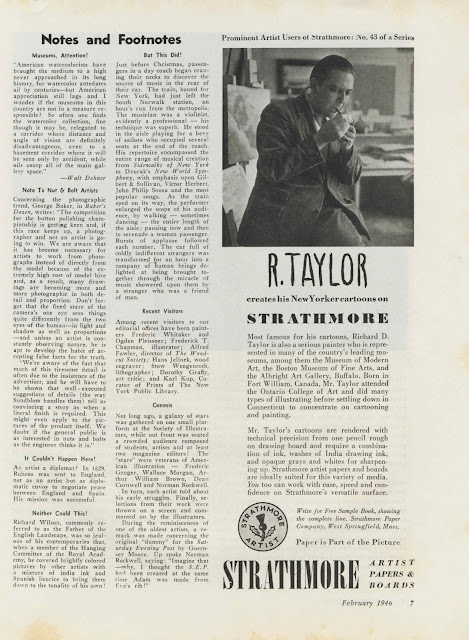 Taylor’s Introduction to Cartooning was published by Watson-Guptill Publications in 1947 and was advertised in Life, December 1, 1947.The Wilton Bulletin (Connecticut), May 27, 1970, said Taylor also studied at the Florence Kane School of Painting [sic; Art] and with Vaclav Vytlacil. Taylor passed away May 25, 1970, in West Redding, Connecticut. He was buried at Umpawaug Cemetery.