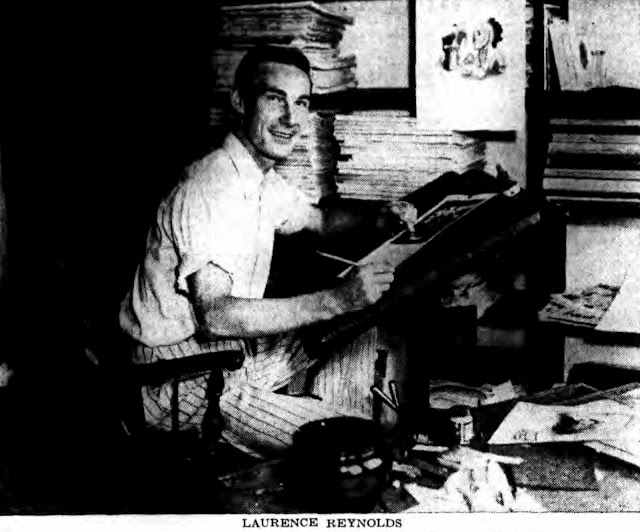 
Laurence “Larry” Reynolds was born in Mount Vernon, New York, on February 12, 1912, according to the Social Security Applications and Claims Index at Ancestry.com. His parents were Aubert W. Reynolds and Alice J. McGuirk.

In the 1920 U.S. Federal Census, Reynolds, his mother and two older siblings, Elizabeth and Herbert, were in the household of William “Mangan”, a maternal uncle. Mangan was married with two children. They resided in Mount Vernon at 528 East Third Street.

The 1930 census recorded the Reynolds family under the name Werden and they resided at the same address in the previous census. Further investigation revealed that Reynolds’s father’s middle name was Werden which was his mother’s maiden name. Eighteen-year-old Reynolds was a night cashier at a drug store.

A 1955 issue of Collier’s said “Larry Reynolds sold his first cartoon, to Collier's, in 1932 when he was a youth holding down other jobs, such as hotel night clerk and restaurant cashier.”

The Daily Argus told how Reynolds became a cartoonist.


…Larry became an artist by way of history lessons, finding it much more interesting to cross Lincoln’s eyes than to remember dates. At the age of thirteen he bicycled to New York City and offered his first efforts to the New York World, but was turned-down. After attending Grand Central Art School he became a serious contributor to many of the best magazines.


…“Louisa” is that doughty dowager, old in physical appearance but with an ultra-modern mental outlook, who appears weekly in the cartoons published in Collier’s Weekly magazine. Laurence Reynolds, 22-year-old cartoonist, who maintains a studio in the Pelham National Bank building, is responsible for “Louisa’s” escapades.

“Louisa’s” fame has even spread to England. Readers of an English comic magazine have been chuckling over her amusing antics which have been reproduced from Collier’s.

Reynolds’ work has also appeared in Judge, Life and the New Yorker.

…Readers of The Pelham Sun will remember “Larry” for his local cartoon series, “Only 35 Minutes From Broadway,” which appeared in this newspaper three years ago. Many Pelhamites were amused as they recognized their neighbors (but never themselves) in the pictures which showed unique suburban situations….Reynolds received high praise for his work from prominent newspaper men, residents of Pelham.

…“Larry” likes to recall the time when he took the art editor’s advice and enrolled in a cartooning class. When the instructor learned that I was selling my work, he promptly resigned and made me the teacher. He wanted to take lessons from me.

A feature in an August 1936 issue of the Daily Argus covered three Reynolds’s creations.


…He’s got something in Louisa and Butch and Gran’ma. Readers of Collier’s, Judge, the New Yorker, Saturday Evening Post, the American, and other magazines in which Larry’s cartoons appear, look for these three as though they were old friends. They cut them out and save them or send them to friends.

You may remember Louisa, a heavy-set dowager, with blonde hair, wide-eyed, and with a short, turned-up nose, as she came out several weeks ago in Collier’s, ploughing through the snow with an umbrella in her left hand, a leash in her right, at the end of which is a little terrier, and beneath the picture, the caption, “Come on, mush, Gwendolyn, mush!”

Or Butch, a big “bruiser” lying asleep against a pile of sacks, his hat pulled down over his brow, his hands crossed on his chest. Standing beside him are two laborers, one with a shovel slung over his shoulder, and underneath. “Maybe we better tell Butch it’s five o’clock. He’d feel bad if he knew he was sleepin’ on his own time!”

…But most of the Reynolds fans love Gran’ma best of all. The dear little old lady is short and rather wiry, with a chin which bespeaks determination and a pair of glasses which usually sit on the end of her nose. She sometimes wears a tiny, old-fashioned bonnet, which ties under her chin and she not infrequently carries a parasol.

In a recent picture, she is attending an old-fashioned melodrama. The action has reached its most exciting point, with the hero, heroine and be-moustached villain face to face on the stage. Gran’ma has become so excited she can’t stay in her scat and is right up close to the footlights, admonishing the heroine, “Don’t be a mucker. Marry the rich one.”

Reynolds has not yet been found in the 1940 census.

American Newspaper Comics (2012) said Reynolds was one of six credited contributors to PMantics which debuted August 18, 1941 in the New York City newspaper, PM. When PMantics was syndicated it was re-titled Crack-Ups. Reynolds was replaced by Irving Roir in August 1942.


“Butch’s” Father to Be Inducted into Army Today

Larry Reynolds, creator of the popular “Butch,” appearing in Collier’s Weekly and cartoonist for the New Yorker magazine among others has enlisted in the Army, and will be inducted today.

Reynolds who lives at 421 Pelhamdale avenue is 31 years old and for some time has been a familiar and well-liked figure in Pelham. After preliminary training he will apply for a post in the camouflage corps.

A 1943 issue of Collier’s noted Reynolds’s whereabouts and training.


At this moment, Sgt. Reynolds is camping out at the A. P. Hill Military Reservation in Virginia, as a surveyor with his Field Artillery outfit. Frantically frustrated, we recently wrote him to ask when we might expect another Butch drawing. His response was prompt. "We are settled here for what looks like a long stay," he explained. "Training is even more intensive than at Meade, but more interesting. I fired forward observation the other day. I bracketed my target after three or four sensings, which is about average for that type of firing. Best regards! Larry.” 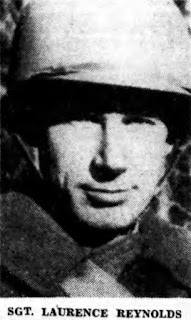 The Pelham Sun, March 23, 1944, published this item on Reynolds the ski trooper.


Technical Sergt. Larry Reynolds, noted cartoonist, creator of “Butch” is now a ski trooper, having undergone special training at McCoy, Wis. He was visiting Pelham on Wednesday en route to a new appointment.

The 1955 issue of Collier’s said “…Butch...the lovable burglar has appeared in Collier's regularly ever since, except for a short hiatus during the war when Reynolds was in the Third Army. Butch appeared in Yank a few times and was swiped by the Nazis for German magazines….”

After his military service, Reynolds continued cartooning. At some point he left Collier’s for Look magazine. Some of Reynolds’s Butch cartoons in Collier’s are here, and in Look here and here.


…Pupils and former pupils representing three generations helped Sister Simplicia to celebrate at a reception in the church hall this afternoon. From the parish she received a scroll designed by Laurence (Larry) Reynolds, a magazine cartoonist and a member of the St. Catharine’s class of ’26….

Comments:
That's my Uncle Larry as we called him. On Cape Cod he was especially known for his seascapes in oil. Our family has countless of his cartoon originals. We have been thinking of producing a showing of his work over the years. Nice to read what you have written about him.