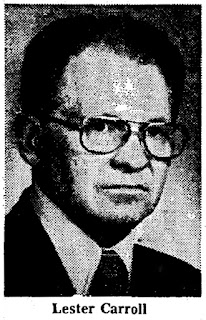 Lester Edward “Les” Carroll was born in Lancaster, Pennsylvania, on June 19, 1912, according to the Social Security Application and Claims Index at Ancestry.com, and the Supplement to Who’s Who in America, Volume 44 (1987).

The 1920 U.S. Federal Census recorded Carroll and his parents, Lewis and Cora, in Lancaster at 330 North Franklin Street. His father was a telephone linesman.

In 1930 Carroll and his parents resided in Manheim, Pennsylvania on Eden Street.

In the 1940 census, Carroll was the head of the household which included his wife, son, Lester, Jr., and parents. They resided in Manheim on R. D. Number Five. Carroll’s highest level of education was the twelfth grade.

Who’s Who said Carroll was a staff artist with the Newspaper Enterprise Association beginning in 1943. According to American Newspaper Comics (2012), Carroll’s strip, The Tillers, began May 10, 1943. With staff writer, Hal Cochran, Carroll drew First Aid for Santa which ran from November 22 to December 24, 1943. In 1944, Carroll produced Dinah which was the topper to Brenda Breeze.

Beginning in 1961, Carroll’s Life with the Rimples ran to April 4, 1975. Carroll assisted Edgar Martin on Boots and Her Buddies. Martin turned over the Sunday page duties to Carroll who drew it from June 6, 1965 to October 6, 1968. Carroll also drew the Boots toppers Babe and Horace, Boots Cut-Outs and The Gooneys. Next, Carroll drew and Tom McCormick wrote Our Boarding House from 1971 to 1984. The Mobile Press Register (Alabama), August 1, 1976, interviewed Carroll and asked:


What led to your drawing “Our Boarding House”?

Going all the way back, my parents said that instead of “crayoning” coloring books I would copy the pictures, and later I would copy the funnies in the daily newspaper. I began freelancing while I was working in the office of an auto parts manufacturing company. I kept with it and eventually went to work for Newspaper Enterprise Association doing general drawing and a weekly farm strip. I used to draw “Boots and Her Buddies” and also “Alley Oop.” I returned here from Lancaster, Pa., in 1969 to draw “Our Boarding House.”

According to Who’s Who of American Comic Books 1928–1999, Carroll used the Landon Correspondence School. He had stints at these animation studios: Mintz, Pat Sullivan, Schlesinger, Fleischer and Hanna-Barbera. And he contributed material to comic books.

The Ohio Deaths records at Ancestry.com said Carroll passed away October 28, 1998, in Rocky River, Ohio. He was buried at Greenwood Cemetery.

Comments:
Any idea if this was the same Les Carroll who, starting in 1954 and continuing for a decade or so afterwards, had a syndicated music review column called "Country Platters"?