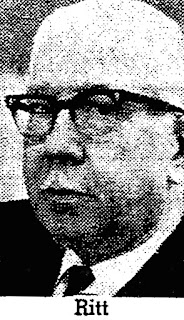 William H. Ritt was born in Evansville, Indiana, on December 29, 1901, according to a family tree at Ancestry.com. His parents were Louis E. Ritt and Maria Holtman. In some families, the mother’s maiden name was used for a son’s middle name, so the initial H may have been for Holtman.

In the 1910 U.S. Federal Census, Ritt was the third of five children. Their father was a . The family, which included Ritt’s maternal grandmother, lived in Evansville at 612 Ingle Street.

Ritt and his family were at the same address in the 1920 census. Ritt’s occupation was a clothing store salesman.

The 1930 census recorded newspaper writer Ritt, his wife and daughter, Marianne, in Cleveland at 8901 Carnegie.

In American Newspaper Comics (2012), Albert Becattini said Ritt wrote Frank Merriwell’s Schooldays which ran from mid-1931 to mid-1934. Ritt created Brick Bradford which was drawn by Clarence Gray. The strip debuted August 21, 1933 and ended March 24, 1957. Ritt’s last daily strip was November 13, 1948 and Sunday on June 12, 1949. The Brick Bradford topper was The Time Top which ran for two months in 1935. With the success of Brick Bradford, Ritt created Chip Collins’ Adventures which began July 16, 1934 and lasted a year. Artist Jack Wilhelm started the strip and was followed by Paul Frehm. Additional scripts were by Jack Kofoed and Sheldon Stark. When Chip Collins’ Adventures ended it was replaced by Ritt’s Gabby. Joe King drew the strip which lasted from July 29 to October 26, 1935. 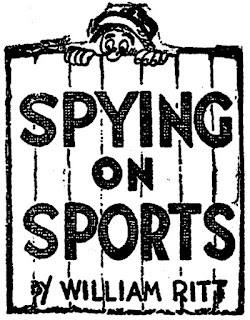 Ritt’s 1940 address was 3691 Sutherland Road in Shaker Heights, Ohio. HIs occupation was editorial writer for a city newspaper.
Ritt wrote a chapter called “The Head Hunter of Kingsbury Run” for the 1947 book, Cleveland Murders. 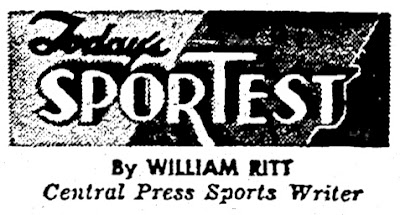 American Newspaper Comics said Ritt updated Clifton H. Crittenden’s strip The Story of Stalin, which had supplemental art by Alfred J. Buescher. The revised version ran from April 7 to 13, 1953. Later that year Ritt and Buescher’s Once Upon a Christmas Eve ran in December. In December 1954 the same team produced Eski. Their final collaboration was In the Days of Davy Crockett in 1955.

Ritt passed away September 20, 1972, in Warrensville Heights, Ohio. His death was reported in the Cleveland Plain Dealer (Ohio), September 21, 1972:

Mr. Ritt wrote the continuity for a comic strip, “Brick Bradford,” for many years. The strip drawn by artist Clarence Gray, was one of many marketed by King Feature Syndicate. Central Press Association was a division of King Features Syndicate here before it closed in 1971.

Mr. Ritt also wrote a column, “You’re Telling Me,” for Central Press, and wrote a chapter on the Kingsbury Run torso murders for a book on Cleveland murders.

He was born in Evansville, Ind., and worked on newspapers there until he came to Cleveland in 1930.

Surviving are his wife, Elizabeth; sons, William, John and Robert; a daughter, Mrs. Patrick Jeffries; a brother and two sisters.

Services will be in the Flynn-Mylott funeral home, 4600 Mayfield Road, South Euclid, at 11 a.m. today.

Comments:
Back in December 12, 2013 I sent around a bio of Ritt with a compilation of all the ESKI strips. Some notes and additions to the excellent bio above:

Lew Sayre Schwartz, who later ghosted on the BRICK BRADFORD Sundays for Grey, told me William Ritt was fired from that strip for continually missing deadlines.

The write-up above implies BRICK ended March 24, 1957. It ran, of course, until 1987. Ritt did indeed create Brick, combining his research into the Aztec culture with an Allan Quatermain-like hero. He reportedly submitted it to King Features' head honcho Joe Connolly at least 3 times [using unknown artists] before hooking up with Clarence Gray and syndicate Central Press Association, all the while continuing to work as a sports reporter for the Cleveland Press and doing a weekly? syndicated column called RITTICISMS.

Ritt was involved in other strips besides those listed. He wrote gags for Paul Robinson's ETTA KETT and Wally Bishop's MUGS McGINNIS.

He pitched a SECRET AGENT X-9 storyline after Alex Raymond announced his departure but it (apparently) went unused. He also failed to sell a strip featuring a young Indian boy named CHIEFIE in 1936; Chiefie later reappeared as Brick's sidekick in the daily DIAMOND DOLL storyline in 1940. After his BRICK gig, he pitched JUSTIN WRIGHT, about a medical missionary, with artist Andrew Bradish.

FRANK MERRIWELL, incidentally, had been the first character to make the leap from pulp to comic strip, beating BUCK ROGERS by a year. One BUCK researcher sent me a file which hints that it was Ritt who suggested that Philip Francis Nowlan bring BUCK to the comics.

After leaving Brick, Ritt kept busy with not just YOU'RE TELLING ME, and sports reporting, but fact based articles on Peru and his obsession with native Americans like Incas, various American Indian cultures and Eskimos. His ESKI, of course, continued this interest.