Toppers: When Mother Was a Girl 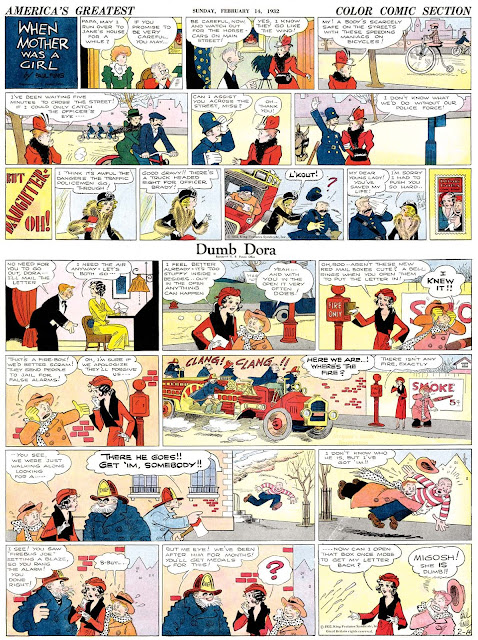 Dumb Dora began in 1924, and was originally by Chic Young, who left it to create Blondie in 1930. The feature, about a dizzy brunette who often comes out on top despite herself, suffered from a pretty severe case of one-joke-itis, but was always a very pleasant and well-drawn feature.

The strip gained a Sunday page in 1925, and when Hearst decreed that all their Sunday strips needed to have toppers in 1926, Young settled on When Mother Was a Girl after a short flirtation with a strip titled Joe College. This topper, too, was a one-joke strip, in which the genteel and ladylike woman of the 1890s is compared to her daughter, a fast-living, smart young girl-about-town.

When Chic Young abandoned the U.S.S. Dora in 1930, the great King Features bullpenner Paul Fung took over (starting 5/4/30 on the Sunday page), and he produced a strip that looked and read just like Young's, except that he polished the art up just a little bit, because he was just too darn good not to.

In 1932, Fung went on to other assignments, and Dumb Dora was handed off to Bil Dwyer. His style was a little looser, but still maintained a good thread all the way back to Young. Milt Caniff says that Dwyer had trouble drawing pretty girls, and paid him to draw them in Dumb Dora for quite awhile.

Speaking of assistants, expert art spotter Alberto Becattini mentions other assistants -- Bud Counihan, Bob Naylor, Bob Dunn and Howard Boughner -- but I don't know if any of them were particularly involved in producing the topper.

When Mother Was a Girl lasted as long as the Dumb Dora Sunday page, ending on January 5 1936.

If you'd like more Dumb Dora, head on over to King Features' Ask the Archivist blog, where you can see additional samples of this delightful strip, and its topper When Mother Was a Girl.