Alan B. Maver was born in Manhattan, New York City, on July 5, 1909, according to the New York, New York, Birth Index at Ancestry.com.

In the 1910 U.S. Federal Census, Maver lived with this Scottish-emigrant parents and four, older New York-born siblings in Manhattan at 727 Columbus Avenue. His father was a carpenter.

Information about Maver’s education and art training has not been found.

In 1930, the census said Maver was a newspaper reporter and cartoonist. The Town Times (Watertown, Connecticut), February 2, 1978, said, “Maver…began his career as an assistant to Feg Murray, whose work was appearing at the time in the New York Sun. He took over the sports cartoon production six years later when Murray left the paper.” It appears Murray’s sports cartoons began in 1923 with Sports of 1923 from Associated Editors. Presumably, Maver assisted Murray beginning sometime in the mid- to late 1920s. Maver’s sports cartoons were distributed by United Features Syndicate followed by King Features Syndicate in 1948, according to The Day (New London, Connecticut), May 24, 1984. Some of his cartoons, from 1946 to 1967, are here. 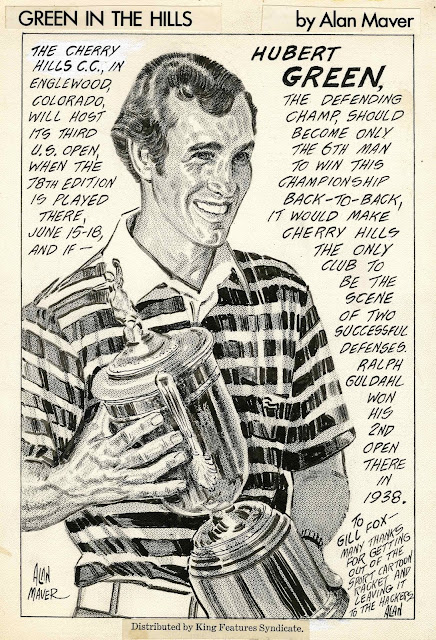 American Newspaper Comics said Maver drew the World War II series, Stars in Service, for the United States Treasury Department. Maver also had a brief career in the comic book industry. Some of that work is here.

Maver passed away May 22, 1984, in Southbury, according to the Connecticut death index. His death was reported two days later in The Day.