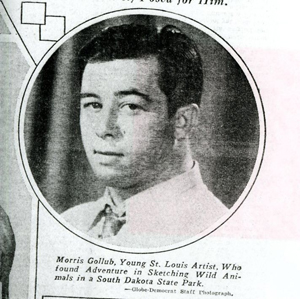 Morris Gollub was born in St. Louis, Missouri, on October 6, 1910. His birthplace was noted on passenger list and the birth date is from the Social Security Death Index. Gollub’s nickname has been spelled two ways, Mo and Moe.

Gollub’s father was Josiah Manuel Gollub according to a World War I draft card.

He and his wife, Pearl, resided at 5644 Etzel Avenue in St. Louis. The same address was recorded in the 1920 U.S. Federal Census which listed Gollub, his parents and two younger brothers, Frankie and Myron. Gollub’s father was in the cleaning business.

The 1930 census said the family of five lived in University City, St. Louis County, Missouri, at 474 University Drive. Nineteen-year-old Gollub was not working at the time. The 1940 census said he had four years of college so Gollub was probably a student in 1930. Information regarding Gollub’s art training has not been found.

Mike Barrier summarized Gollub’s work and travels from 1937 to the mid-1940s. The image of Gollub is from Barrier’s site.


He started at the Disney studio in January 1937 and worked as a layout and story-sketch artist, notably on Bambi. He took part the 1941 strike, was laid off after the strike ended, and joined the navy early in 1942. When he left the service, he arranged to be discharged at New York, and he quickly found work at Western with the help of former Disney friends like Walt Kelly and Dan Noonan.

The Smokey the Bear comic strip was credited to Wes Wood. According to American Newspaper Comics (2012), Paul Leiffer said the actual creators were Gollub and writer Paul S. Newman. Their collaboration was confirmed in the book, Guardian of the Forest (1995). The Sunday page began June 16, 1957 and the daily followed the next day. Some Sunday pages can be viewed here. Prior to the strip, Gollub and Newman had produced three Smokey the Bear comic books for Dell Publishing: Four Color #653, October 1955; Four Color #708, June 1956; and Four Color #754, November 1956; The duo produced five more issues from 1957 to 1961.

Gollub’s mother passed away October 1939 and his father in January 1965.

Gollub passed away December 30, 1984, in Santa Cruz, California, according to the California Death Index at Ancestry.com.

Comments:
I've been collecting Moe Gollub's art, published work and researching his life for over 50 years. The original art for Four Color #818 is not the work of Moe Gollub. He did paint some SMOKEY THE BEAR covers but this is not one of them. His SMOKEY THE BEAR covers are 4-color #1016 and #1214. I corresponded with Gollub in the mid-1970s and he approved my checklist of his work.

HI Robert, I worked with Moe and was his assistant in 1977 at Hanna Barbera. I recall him getting 4x6 photos of Tarzan covers, with requests to verify that he'd painted them, which he did. He told me that a collector had sent them and was purchasing the original paintings higher prices than he'd received when he'd painted them. He was proud of them and hung a couple of the photos in a tool cabinet by his desk. Let me know if I can ever help you. Sincerely, Mark Kirkland

Hi, Mark: Thank you for your offer of help. Although they are are scarce, I've managed to pick up five of Moe's cover paintings: three Tarzan covers, a Korak cover, and a Daniel Boone cover. I've written an essay on Moe Gollub for the two volume THE PS BOOK OF FANTASTIC FICTIONEERS edited by Pete von Sholly, which is now available for purchase from PS Publishers, Britain. My essay is in the first volume if not interested in both volumes. Best, Robert