Francis Wellington Dahl was born in Wollaston, Massachusetts, on October 21, 1907, according to Who Was Who in America with World Notables, Volume V, 1969–1973. The Massachusetts birth record, at Ancestry.com, said he was the son of Joseph F. Dahl and Annie L. M. Boyd.

The 1910 U.S. Federal Census recorded Dahl and his parents in Quincy, Massachusetts at 16 Green Street. His father was a transportation clerk.

Quincy continued to be Dahl’s hometown in the 1920 census. His address was 25 Merrymount Avenue. The Dahl family lived next door at number 27 in the 1930 census which said Dahl was a newspaper cartoonist.

The Boston Herald American, May 7, 1973, said, “Dahl’s newspaper career began in the old Boston Herald art department in 1928, the year he was dismissed from Quincy High School for absenteeism.” Herald American cartoonist Jim Dobbins recalled “…that Dahl had no formal art training and got his work printed only by persistently submitting it to the editors.”

In 1940, Dahl was married and had a daughter. He resided in Cambridge, Massachusetts at 182 Bowdoin. In 1935 Dahl was a Boston resident.

Who Was Who said Dahl married Louise C. Bartlett on June 4, 1933. They had three children: Jane, Francis W., Jr. and Linda.

When Dahl broke his right arm in mid-December 1940, he taught himself to draw with his left hand. These cartoons were collected in a book. 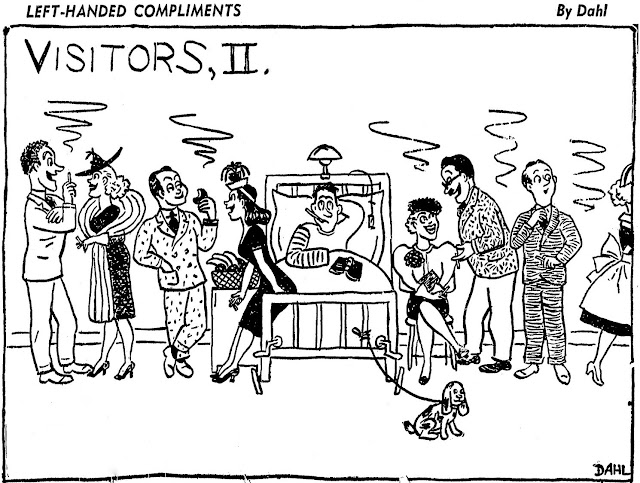 Dahl passed away May 6, 1973, in Newton, Massachusetts. His death was reported the following day in the Herald American.

Comments:
Oh, yeah, I've seen some of his books-His depictions of the Boston Common squirells could scare the toughest New York rat!