A New Medium of Service Is Introduced – 1875


The same two decades that saw the establishment of new readyprint companies and the strong competition among them also witnessed an important development in the syndicate idea. This was the addition of the stereotype plate as a medium of delivery of auxiliary newspaper service which came into use soon after 1870 as an evolution of the practice of offering ready composition to publishers.

As early as 1872 the Middletown (N. Y.) Stereotype Company was selling type-high sectional blocks of ready composition and by 1875 it had established a branch at Lafayette, Ind., under the management of G. H. Boyd. For convenience in make-up, this composition was offered in two-inch sections and was sold at 10 cents per thousand ems.

Other companies in the field at this time were Damon and Peets and M. J. Hughes, both of New York. Hughes' patented method of supplying this material was, according to his advertisement, a "cast-blocked plate with no beds, bases or complicated furniture used. All plates before being sent out are by level power machinery pressed down and run under a planing knife set exactly type-high." His price was also 10 cents per thousand ems.

In July, 1875, Damon and Peets were warning publishers against using stereotype plates manufactured by Hughes, where the plate and wood back or block were cast together, as an infringement of a patent which they held. This resulted in Hughes inventing a reversible plate with different matter on each face. Inserted in each edge of the plate was a strong strip of combined paper and cotton which held the plate firmly upon the wood base whether through being turned down and tacked in or through the pressure of the quoins upon them. After one side had been used for printing, the plate could be turned over and the matter on the other side printed. These plates had the advantage of being lighter and therefore less costly in transportation charges. The principal advantage, however, that of giving a double amount of reading matter, was not sufficient to offset the obvious handicap of a bothersome remounting process and the reversible plates failed to gain a wide popularity with the publishers.

The greatest stride forward in the development of this feature in syndicate service came in April, 1875, when Kellogg and James J. Schock made and patented an improvement in plates and their fastenings. This was done in the Chicago office of the Kellogg Newspaper Company and by June the new plates were added to the service of this syndicate.

Kellogg's plates were drilled for screws or tacks with which to fasten them upon wood bases and could be cut to any desirable length by the publisher. He offered the plates at 2 1/2 cents an inch plus the cost of the metal for the first order. When the publisher had printed from them, removed them from their bases which he kept for mounting other plates, he could ship them back to the supply house and the cost was thus held to the 2 1/2 cents only. The prime advantage of using these plates was the lower shipping charges since they were lighter than the old type-high ready composition which had either solid metal bases or those with a thin core. 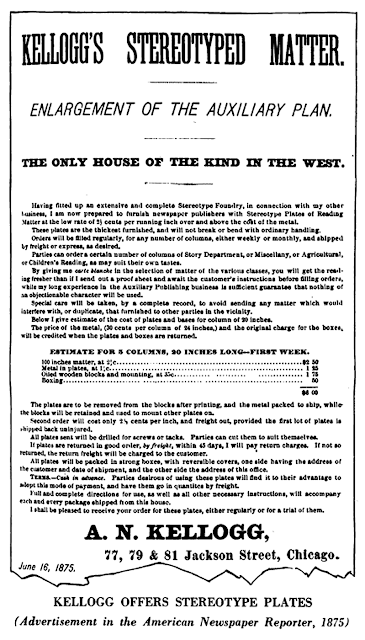 The reading matter which Kellogg offered in this form was a story department, agricultural information, children's reading and miscellany. It was the type of material which dailies had been printing for many years but which weeklies, because of the cost of composition, could not supply their readers in any great amount, unless through the medium of printed sheets.

Many of them, because of prejudice against "patent insides," would not use readyprint. But they were not averse to supplementing their local news with features printed from plates, especially when Kellogg advertised that "special care will be taken to avoid sending any matter which would duplicate that furnished other papers in the vicinity." So this fact, as well as the convenience of the plates, added many more country weeklies to the ranks of syndicate service users.

Kellogg further improved his plates and fastenings in 1876, and in 1878 he and Schock perfected the "butterfly plate," one with a spring in the form of an "X" on the back. This spring was pinched together, inserted in a slot in metal bases which were then being used, and upon expanding held the plate firmly to the base. Kellogg also invented a celluloid plate, the lightness of which further reduced transportation charges and gave it a world-wide sale.

In the east the plate business enjoyed a rapid growth. In November, 1875, the American Printers Warehouse, controlled by the George P. Rowell and Company Advertising Agency, announced a new process of stereotyping and offered such feature material as wit and humor, agricultural, general religious news, home circle, short sketches and miscellany. It also announced that "an important feature, which has been suggested by many publishers who desire to keep their readers fully informed on current events in the metropolis, will be a spicy, newsy 'Letter from our New York Correspondent.' We have secured for this work able and competent letter writers, and will give, weekly, a summary of everything that is calculated to interest and entertain." Just who these able and competent letter writers were is unknown, but an examination of the product of their pens shows that their idea of what was spicy and newsy was somewhat different from that of the Odd Mclntyres and Walter Winchells of today. 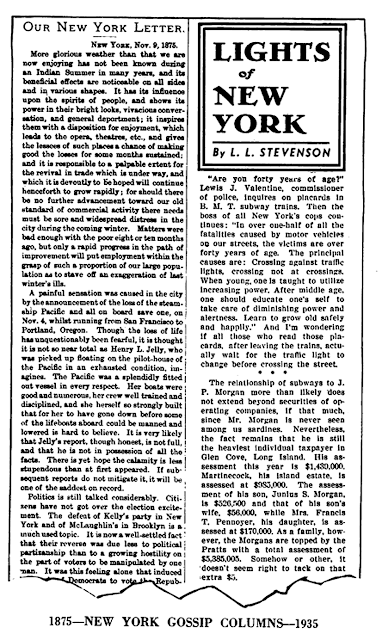 The proposition of the American Printers' Warehouse was a charge of 60 cents for a column of the feature material and $1.25 a column for the news letter with an extra charge for bases and metal, but a rebate of 10 cents a pound for the metal upon return of the plates. In the same month this company, as well as Damon and Peets, advertised that they were ready to furnish the President's message in plate, "immediately after delivery," an indication of the increasing desire of the syndicates to offer their clients "spot news" so far as it was possible for them to do so.

The introduction of stereotype plates into syndicate service met with some of the criticism encountered by readyprint at its inception. Publishers who had been suspicious of the use of printed sheets were also opposed to plate matter for no other reason apparently than a sense of consistency in opposing all innovations in their craft. For those who took pride in the fact that their newspapers were "all-home-print," it meant adding another word to their vocabulary of scorn for users of syndicate service. They called it "boiler plate" with the same derogatory imputation as that conveyed by the term "patent insides," and editors who filled up their papers with plate matter cut to fill their needs were said to "edit their papers with a saw."1

Our facilities are so complete and our arrangements so well systematized that our patrons can dictate the contents of their sheets to almost the same extent as when the mechanical work is done entirely at home. Our plan secures double the reading matter, state news and legislative reports, a full summary of general news, late and correct market quotations, an agricultural department, a department for young folks and a good story for everybody.

Our political editions are edited by men identified with the different parties—in full sympathy with their work—and all our editors are familiar by actual experience with the business of editing and publishing country papers. Our news columns are full and comprehensive and contain news up to the time of printing. We supply papers in the same locality with entirely different matter, being particularly careful to prevent interference in this respect. We insert home advertisements to any extent desired at reasonable rates without electrotyping, thereby admitting of changes being easily and cheaply made. All lottery, gift concert and other illegal or immoral advertisements are excluded from our columns.


That last statement is especially interesting as indicative of the newspaper reading public's tastes 60 years ago. In other advertisements in the trade journals of that period special emphasis was laid upon the high moral quality of the feature material offered publishers for their papers. For instance, in announcing a serial tale entitled 'Wooing in the Alps, or How the Colonel Won His Bride', the American Printers' Warehouse stated that "the tale is by an author who is well known as a novelist and who has acquired the rare reputation of being a thrilling, sentimental, yet withal, thoroughly decorous writer. In all tales furnished by us talented effort and propriety will be well looked to and nothing having a deteriorating tendency will find place." It would tax the imagination to apply the foregoing advertisement to some of the "Sunday features" offered by a few of the syndicates of today! 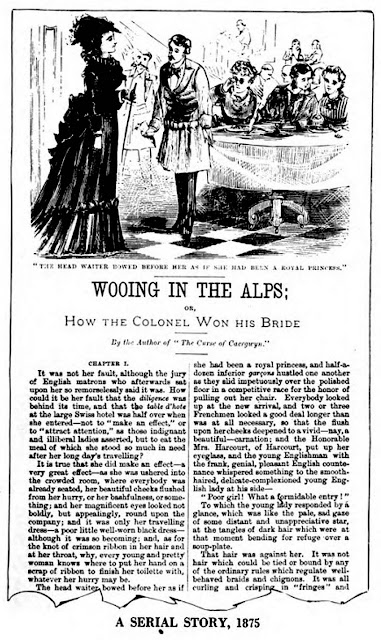 Besides aiding the readyprint business, the plate, as a medium of syndication itself, gained in popularity during the late seventies and early eighties. On August 17, 1882, Maj. Orlando Jay Smith, publisher of the Chicago Express, founded the American Press Association and began supplying all kinds of features in plate form by the page or by the column to country newspapers.2 Smith is credited with having started on their careers or furthered the popularity of such notables as C. B. Lewis, Edgar Wilson Nye, Capt. George L. Kilmer, Donn Piatt, Champ Clark, Eugene Field, Ella Wheeler Wilcox, Murat Halstead, Sewell Ford, Tom Masson, Jack London, Booth Tarkington, and the Rev. T. DeWitt Talmadge.3 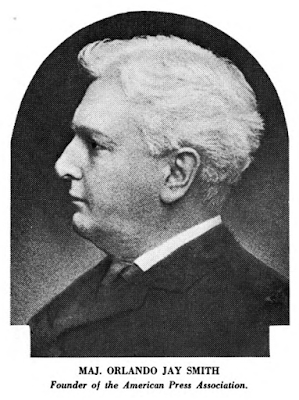