The 1905 and 1906 Toledo city directories listed Eddy as a student at 2742 Monroe. The 1909 city directory said Eddy was a clerk at the Moreton Truck & Storage Company and resided at 2360 Scottwood in Toldeo.

The same address was in the 1910 census for Eddy, his father and paternal grandmother, Charlott W. Eddy. Eddy’s occupation was gallery artist. When the 1910 city directory was released, Eddy was a draftsman, at the Ohio Electric Car Company, who lived at 2433 Monroe. The 1916 directory listed Eddy, an illustrator, at 234 Yaryan Drive, and his studio at 310 Produce Exchange Building. It’s not known where Eddy received his art training. Sometime in 1916, Eddy moved to Chicago.

According to Eddy’s World War I draft card, signed June 5, 1917, he resided at 221 East Ontario in Chicago. Eddy was a commercial artist with the Trade Press Publishing Company, at Harrison and Clark Streets. He was described as tall, medium build with gray eyes and light brown hair.

American Newspaper Comics (2012) said Eddy produced two strips for the Chicago Herald. Back-Yard Movies ran from August 13, 1916 to June 17, 1917 and was syndicated by the Chicago Herald/Keeley Syndicate. The Scoot Family appeared in the Herald’s automobile section, from September 23 to 30, 1917, during the annual auto show. 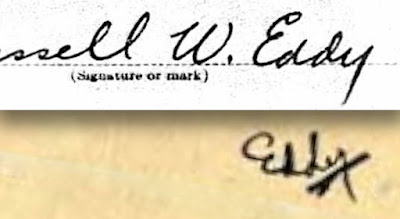 Eddy’s signatures on his draft card and art in 1917

Eddy was counted twice in the 1920 census. In Chicago, Eddy resided at 3054 Sunnyside Avenue. He was a commercial artist at a publication. In Adams, Ohio, Eddy was a commercial artist living in his retired father’s household on Wildwood Street. Toledo city directories show Eddy had moved his residence and studio several times during the 1920s. Samples of his commercial work have not been found.

The 1930 census said Eddy was a commercial artist living with his father at 2030 Riverview Court in Toledo. Eddy moved again, to 821 Walbridge Avenue, according to the 1940 census and his World War II draft card which he signed April 26, 1942. The commercial artist’s studio was at 905 Jefferson Avenue.

Eddy passed away August 21, 1959, in Toledo, as recorded in the Ohio death index. He was laid to rest at Forest Cemetery, the same as his father. Eddy’s headstone reads “Russell Willcox Eddy.” His second world war draft card had Wellington as the middle name. Perhaps no one knew Eddy’s middle name, so his father’s middle name was used instead.