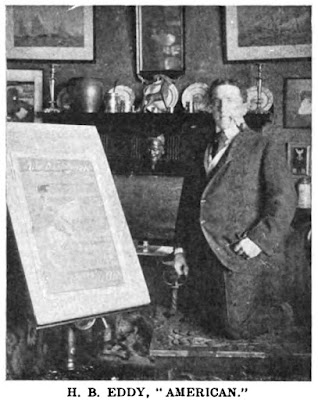 Henry Brevoort Eddy was born in New York on September 16, 1872, according to Who’s Who in America 1903–1905. His parents were Ulysses D. Eddy and Jane Brevoort.

In the 1880 U.S. Federal Census, Eddy, the oldest of five children, resided in Rye, New York. His father was involved with the cotton market. Who’s Who said Eddy’s preparatory education was at St. Paul’s School in Concord, New Hampshire, from 1884 to 1890. Eddy graduated from Harvard in 1894. 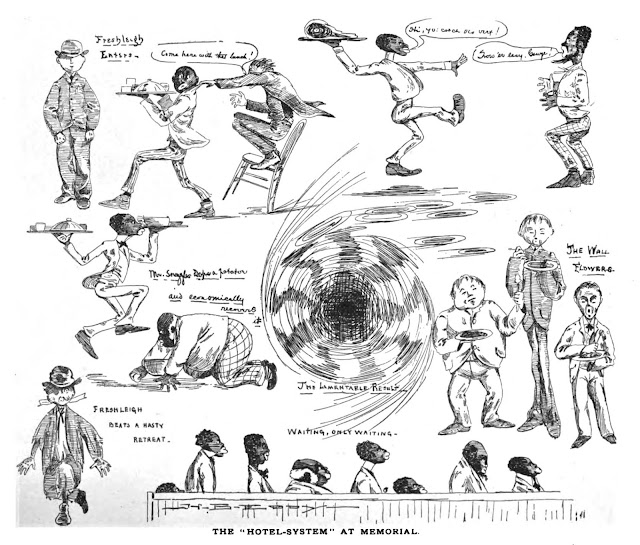 Eddy was profiled in Bradley, His Book, July 1896, which said:


…Mr. Eddy is but twenty-three years of age, and while he has “made pictures” as long as he can remember, his career as an artist can be said to have commenced only a year ago.

Shortly after graduating from Harvard, where he distinguished himself by his work as president of the Harvard Lampoon, he came to New York, where his professional debut as artist and reporter was made to the readers of The Sun.

A student of human nature, he adds a touch of cosmopolitan broadness to his own individuality, and always succeeds in catching the essential and characteristic point; in this there is occasionally an inclination to caricature, at which he is incomparable.

…Mr. Eddy admitted that he thought the poster artist of the future would be more serious, no doubt, and better men will devote their attention to this branch of art, which at present is understood only by a few.

…Mr Eddy’s versatility extends to music, and when not sketching or playing golf, he is busy at the piano, and his friends say he is quite a virtuoso. However, he puts art first and foremost….

Who’s Who said Eddy had been a newspaper artist since 1898 and was on the New York Journal staff.

Eddy was counted in his parents household during the 1900 census. They lived in Oyster Bay, New York. Eddy’s occupation was an artist, who also illustrated many sheet music covers.

In 1910, Eddy and his wife, Marguerite, resided in Manhattan, New York City at 54 West 39th Street. The newspaper artist had been married a year according to the census. The 1915 New York state census recorded the couple in Rye on the Brevoort Farm. Eddy worked as an editor and artist.

American Newspaper Comics (2012) said Eddy drew the final installment of Tad’s series, And His Name Is Bunk, which appeared September 1, 1907. 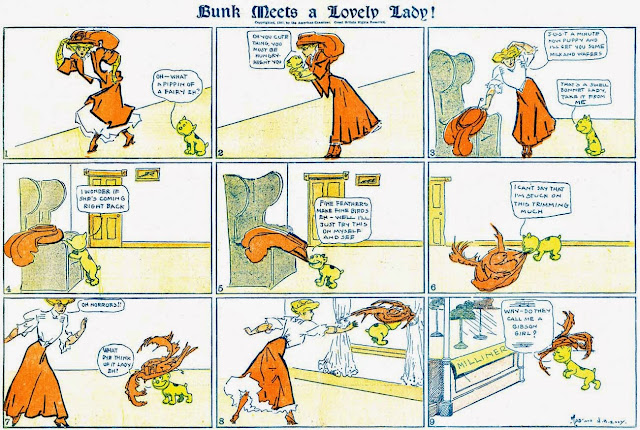 Eddy signed his World War I draft card September 12, 1918. The card said he was an artist editor on the Sunday American. His description was medium height, stout build with blue eyes and brown hair.


There is now intransit from New York to Utica a collection of landscape paintings by Henry B. Eddy, which are to be shown as a “one man” group exhibition at the Utica Public Library. The pictures will be hung us soon as received, in order that the exhibit may be opened May 10, as announced, to remain until the end of June.

The painter, whose studio is in the still unspoiled hill country of North Central New Jersey, near Weetfield, is one of the young men trained at the Art Students League under the influence of the famous trio. Kenyon Cox, Douglass Volk and John T. Twatchnian. Later he studied under that master of modern decorative figure painting, Mucha, and with George Elmer Browne, at the latter’s summer haunt near Provincetown. Mass. From this quaint and lovely center of New England life in the old days come some of the most interesting of last season’s output of Mr. Eddy’s work.

Of these some have been shown already at the Salmagundi Club of New York, of which the artist is a member, some at the recent exhibition and some at the Thumb Box Show, just closed.

But beside the Provincetown pictures of the old time town, its wandering lanes and staid white walled shingle-roofed houses, and the yellow browns and russets of sand dudes and coast, are scenes from Maine and the Adirondacks. from New Jersey, Delaware and Virginia.

From the Maine shore the landscape is of the rocks and sea at the end of Squirrel Island—from the Adirondacks the dark freen pines that overshadow Big Moose Lake, and the shores of Dart’s Lake with Slide-Off Mountain looming in the distance. The New Jersey pictures are from the Watchung Mountains, glimpses of tumbling streams flowing under old red bridges, of yellow hillside homes half hidden in the forest, of gray-toned distances, and of the early springtime near Echo Lake.

The hill country along the Delaware River is shown in the canvases from the State of peaches and Virginia appears in the country of Washington’s youth the woods and rocks near Great Falls.

“The last not least in love” are the thumb box sketches, of which a number are included in this representative and altogether interesting showing of one man’s part in to-day’s American landscape art.

Eddy passed away July 29, 1935, in Rye, New York. His death was reported the following day in The New York Times.


Henry Brevoort Eddy, an editor and cartoonist on the staff of The American Weekly Magazine and member of an old New York family, died suddenly of a heart attack here tonight at his residence, Brevoort Farm. He was in his 64th year.

A native of New York, Mr. Eddy was the son of the late Ulysses Doubleday Eddy and the former Jane Brevoort. In 1894 he was graduated from Harvard University, where he was an editor of The Harvard Lampoon.

One of his first newspaper jobs was with The New York Sun. Afterwards he worked on other newspapers, including The New York American, besides illustrating several books.

Funeral services will be held at 2:30 P,M. on Wednesday at St. Thomas Episcopal Church Mamaroneck, N.Y. Burial will be in Woodlawn Cemetery.