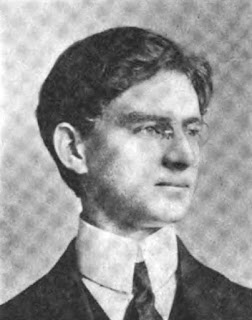 Harry Frank “Hy” Gage was born in Hartford, Connecticut, on April 13, 1878, according to his World War II draft card and passenger lists from 1930 and 1934. Information posted at Lambiek Comiclopedia said, erroneously, that Gage was born in Philadelphia, Pennsylvania. Gage’s nickname, Hy, is the abbreviation for Harry and Henry.

In the 1880 U.S. Federal Census, Gage was the second of three children born to Frank, a bookkeeper, and Nancy, a Canadian. They resided in Hartford, Connecticut at 263 High Street. Gage’s father changed his job and moved the family.

Savannah, Nebraska was the home of the Gage family as recorded in the 1885 Nebraska state census. Gage’s father was a grain dealer.

Gage attended the University of Nebraska. His name was found in university catalogues from 1893 to 1895. Gage graduated in 1898. The Courier (Lincoln, Nebraska), October 1, 1898, noted Gage’s profession and plans.


Harry Gage, the cartoonist, is visiting Leonard H. Robbins at Princeton, N. J. He has been sailing on and fishing in the St. Lawrence. He will study drawing in Pratt institute, Brooklyn, this winter.

Gage was a member of the Pen and Pencil Club of Philadelphia and was chosen as a delegate to the annual convention of the International League of Press Clubs at Atlantic City. Gage’s participation was mentioned in The Fourth Estate, June 3 and June 27, 1903.

Gage was a contributor to Bohemia: Official Publication of the International League of Press Clubs (1904). On and Off the Bread Wagon (1906) was illustrated by Gage. During 1910, Gage contributed articles and comics to Motor Boat. 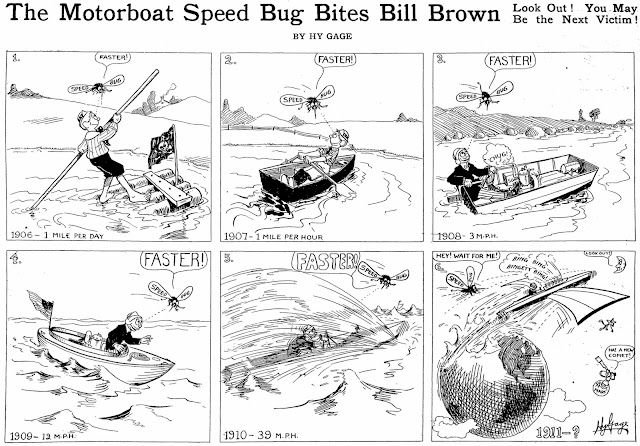 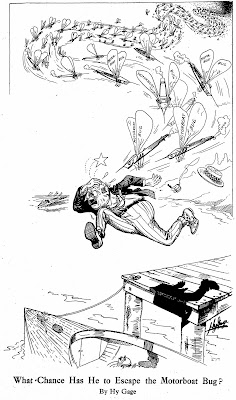 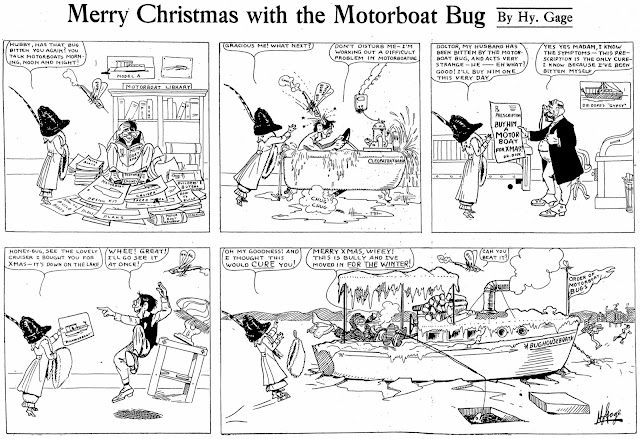 The May 7, 1911 Sunday magazine in some newspapers, including the Courier-Journal (Louisville, Kentucky), Detroit Free Press and World-Herald (Omaha, Nebraska), carried Gage’s article, “Why Is a Comic Artist?” Gage wrote about himself and said:


…So I took a few weeks lessons from Cartoonist Briggs, and sent off a bunch of rot to the magazines. From that day to this my collection of rejection slips has increased by leaps and bounds.

The Philadelphia Academy of Fine Arts and the Pratt Institute of Brooklyn both tried to make a second Rembrandt out of me, but somehow it didn’t take. Under their influence I did attempt a serious work of art. When the critics saw it they said I must have been under the influence of—but we’ll let that pass. They were only jealous.

The American Stationer, August 12, 1916, wrote about using movies as a marketing tool. Gage’s cartoon, “The Dream That Woke ‘Old Fossil’ Up”, was discussed.

According to Cartoons Magazine, December 1917, Gage was one of five artists who drew the billboard over the Liberty loan headquarters.

On September 12, 1918, Gage signed his World War I draft card. Gage was married to Florence and they lived at 1701 Pine Street in Philadelphia. Gage, a cartoonist at the Bulletin, was described as medium height and slender guild with blue eyes and light-colored hair.

Gage’s address did not change in the 1920 census and was a self-employed artist.


Other animated films show a live-action character who plays the part of "an animator" interacting with animated characters; these narratives often seem to comment on the profession of animation itself. In Hy Gage’s Kartoono (ca. 1922), an animator creates a creature that seeks his creator's destruction. The starving artist, Kartoono, practices his lightning sketches on an easel, drawing a hungry dragon that eats his meat and drinks his beer. The artist talks to his creation and confesses: “I’m Busted, Starving, Got Cold Feets. Now to get Busy. No Work, No Eats!”—as if Gage was crying in his own woes about the poverty that his chosen profession has brought to him.

In the second half of the 1940s, Gage contributed Butch and Foxy to comic books.

The 1930 and 1940 censuses said Philadelphian Gage was a cartoonist who resided at 2103 Chestnut Street. When Gage signed his World War II draft card, on April 27, 1942, he worked for the Evening Bulletin and also freelanced. His address was the same in the 1950 Philadelphia telephone book.


Gage passed away in November 1971, in New Jersey, according to the Social Security Death Index which said his last residence was Haddonfield, New Jersey.

Comments:
Hy Gage was a friend Of Charles Dryden, the famous baseball writer and humorist who worked for the Philadelphia North American at the turn of the century. He illustrated Dryden's serialized newspaper short stories, which were eventually turned into books.