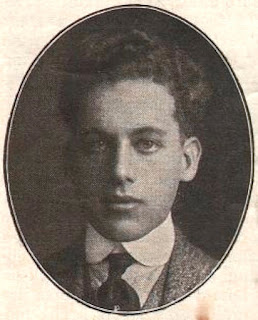 In the 1900 U.S. Federal Census, Carlson was the third of four children. Who’s Who in America said the parents were Peter Carl Carlson and Annie Ramlose. Carlson’s father was a tailor. The family resided in St. Louis at 4641 Bell Avenue. Who’s Who in Animated Cartoons (2006) said Carlson’s family moved to Chicago, Illinois, in 1905.

The Chicago Tribune, May 10, 1967, said Carlson, at age 12, was a newspaper delivery boy who drew sports cartoons which he sold to a cigar store owner who hung them in the window. Carlson was 14 and a student at Lane Technical High School when he sold sports cartoons to the Chicago Inter-Ocean newspaper. Who’s Who in America said Carlson was with the Inter-Ocean from 1909 to 1914.

The Carlson family was recorded in the 1910 census at 712 Aldine Avenue in Chicago. At age 16, Carlson’s occupation was cartoonist. The Inter-Ocean was sold when Carlson was 17. The Tribune said he found a new job at the Chicago Herald. After a short stay, Carlson moved into the animation field in 1914. Who’s Who in Animated Cartoons said Carlson’s first animated series was Joe Boko which was produced for Essanay Pictures. The second was Dreamy Dud which ran from 1915 to 1916. Carlson wrote about himself and animation for the Movie Pictorial, December 1915. Carlson starred in “How Animated Cartoons Are Made.”

Who’s Who in America said Carlson produced material for the Bray Studios from 1918 to 1920. However, Who’s Who in Animated Cartoons said J.R. Bray hired Carlson in 1916. Carlson created three series for Bray: Goodrich Dirt (1916); Otto Luck (1917); and Us Fellers. Carlson’s World War I draft card, which he signed May 31, 1917, showed that he was employed by New York City-based Bray Studios. Carlson’s Chicago address was 424 Oakdale Avenue. He was described as tall, slender build with blue eyes and blonde hair.

According to Who’s Who in America, Carlson married Rosalie Maeder in March 1919. During 1919, Carlson went into business for himself by forming Carlson Studios. Who’s Who in Animated Cartoons said his films were distributed by Metro-Goldwyn-Mayer.

In the 1920 census, the Carlsons were Chicago residents at 4188 Clarendon Avenue. His occupation was cartoonist in the motion picture industry. Carlson’s studio produced animated versions of Sidney Smith’s The Gumps from 1920 to 1921. Carlson met the strip’s writer, Sol Hess, who would eventually leave the strip. Hess and Carlson produced the comic strip, The Nebbs for the Bell Syndicate. American Newspaper Comics said the strip debuted May 1, 1923.

The 1930 census recorded newspaper cartoonist Carlson, his wife and son, Richard Wallace, in Chicago at 460 Barry Avenue. Sometime after the census, Carlson was divorced.

Who’s Who in America said Carlson married Patricia Edenton on November 29, 1933, but the Cook County, Illinois Marriage Index has the day as November 23.

The 1940 census recorded Carlson and his wife, who had three children from a previous marriage, in Chicago at 2613 Hampden Court. When Carlson signed his World War II draft card, on April 27, 1942, he resided at 3020 Sheridan Road. Carlson’s employer was Rae Hess, the widow of Sol Hess who died December 31, 1941. Carlson continued drawing The Nebbs which was written by Hess’s daughter and son-in-law.

Mostly Malarky, a daily panel and Sunday strip, was created by Carlson for the Chicago Tribune-New York News Syndicate in 1946. The strip ended July 30, 1967. Carlson was assisted by Art Huhta on Mostly Malarky and The Nebbs.

Carlson passed away May 9, 1967, in Chicago. His death was reported the next day in the Tribune.