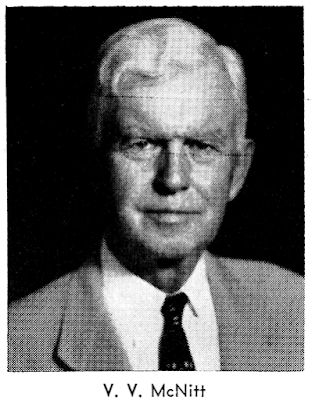 The Central Press Association, a unit of King Features Syndicate, observed its 50th anniversary with a dinner Oct. 14 at the Press Club in honor of V. V. McNitt of New York, who founded CP here in 1910.

Small Beginning
Mr. McNitt had the following to say in regard to the early days of Central Press:

"The Central Press Association was a very little fellow with a rather impressive name when it began business 50 years ago. I kept it 20 years. King Features bought it 30 years ago. For a long time it has been an institution giving me great pride: an institution in which others are more entitled to pride now than I.

"In 1910 I was winding up a short career of four years with the Cleveland Press, for which I originally had great hopes. Some had fared better than I, and others hadn't lasted quite as well. The Scripps-McRae newspapers were exciting and uncertain places of employment in those times. Irvin S. Cobb told me in later years the Cincinnati Post put up with him for three weeks and then advised him to go back to Louisville. O. O. McIntyre quit the Post about the same time I left the Press. Our reasons were the same: we sensed that we were regarded as expendable and decided to move first.

"The service of the Newspaper Enterprise Association was produced in those days in the Press building on West Third Street in Cleveland. It was a daily service, made primarily for Scripps newspapers and others that adhered to the same editorial policies. About 60 papers in all were served.

"Other illustrated news services 50 years ago were Hearst's International, the New York Herald service, American Press Association, and the North American Press Syndicate. I persuaded myself there was room for another.

"On the evening of our first wedding anniversary, June 12, 1910, I entertained my wife at dinner at Weber's restaurant in Cleveland, and asked her whether she could agree to let me quit my $45 job and start a newspaper feature service. She must have trusted me as only a fond young wife can trust an insane young man. She didn't ask: 'What are you going to use for money?' She didn't remind me that I had built a little house to establish her in when I married her, with years of payments yet to make. She didn't point out once more that she would become a mother in about seven months.

"She only said: 'If you want to start a business, I'll stand by you.'

"So I never went back to the Press office, but resigned by mail. My salary stopped instantly.

Desk Space
"My first task, after writing letters to a number of Ohio publishers on my typewriter, was to rent desk space in somebody else's office in the Garfield building on Euclid Avenue.

"The first encouraging answer came from George B. Frease, publisher of the Canton Repository. He was always proud of being my first client as a syndicate man, and I was equally proud of him.

"I was beginning to get clients without having any features to sell. By the 10th of July I had made arrangements with Harry S. Thalheimer, business manager of the Cleveland Leader, to operate in the Leader building, with Leader financing, using the Leader's features, news cuts, and mechanical facilities.

"Sets of proofs of all the features of both newspapers were printed and assembled during the latter part of July, and before the month was over, I was away on a selling trip. Sales of the new Central Press service were made in Erie, Sharon, Youngstown, Alliance, Canton, Lorain, and two or three other towns; enough to bring the total sales to $150 a week by Aug. 31, first release date.

"With the merger completed the Central Press Association had 180 newspaper clients.

"In September 1911, I had gone to Los Angeles for Central Press to cover the trial of the McNamara brothers, charged with dynamiting the Los Angeles Times building and killing 21 employees. In addition to sending stories and photos to Cleveland for the regular illustrated news service, I carried on for a few weeks a special photo service for metropolitan papers in the east.

"Martin J. Hutchens, managing editor of the Chicago Journal, suggested to me when I stopped to see him on the way back to Cleveland, that I ought to venture again into the field of big-city enterprise by getting a well-known man to report the national political conventions in 1912. He promised to write his friend, William J. Bryan, on my behalf.

Bryan Reported
In the month of April, 1912, I met Mr. Bryan in his hotel in Cleveland. In the brief time it took him to dress, Before going out to give his lecture on "The Prince of Peace" in a Cleveland church, Mr. Bryan told me the terms on which he would cover the conventions for Central Press. He would accept a percentage of cash proceeds of sales, without any fixed guarantee or any advance payment. He would pay his own traveling expenses and hotel bills.

"Mr. Bryan was an exciting, controversial figure as a delegate from Nebraska to the Baltimore convention, which nominated Woodrow Wilson for President. At the preceding Republican convention in Chicago, from which Teddy Roosevelt's Bull Moose wing seceded, Mr. Bryan had a great deal of friendly attention.

"The whole enterprise, which included additionally a series of articles on the campaign through the fall, resulted so profitably for Mr. Bryan that he was able to buy the tract in Miami, Fla., where he later built a fine home.

"Central Press' share of the convention revenue permitted settlement of all obligations. Dan Hana had bought the Leader, and was about to put up a monumental new building for it. Harry Thalheimer concluded I would be better off going my own way, so the Leader accepted full payment of $2,500, with interest at seven per cent.

"Not long afterward Central Press moved from Superior Avenue to a new building on East Fourth Street, between Euclid and Prospect Avenues. This was the Frederick building handsome with white terra cotta front, in which we had nearly all of one floor.

"The Leader had formerly done our mechanical work, except for photo-engraving, which we did with our own equipment. Now it was necessary to set up new composing and stereotyping departments, get a new etching machine for the engravers, and buy enough office furniture and equipment for everybody. I was exceedingly proud of our new place.

"Operating costs were higher now, and the need for a larger newspaper clientele was insistent. There was nothing to do but get more business. When the national conventions of 1916 came, Central Press had William J. Bryan as a special correspondent again, with Samuel G. Blythe and Irvin S. Cobb besides. The performance was repested in 1920.

Merger Effected
"In 1927, a fairly new competitor named Editors' Feature Service, backed by Mrs. Mary Harriman Rumsey and managed by William H. Johnson, was merged with the Central Press Association. This deal was promoted by Averall Harriman, to cut his sister's heavy losses and perhaps get out of the syndicate business entirely.

"Johnson had been a syndicate operator for William Randolph Hearst and the New York Tribune. Soon after the merger, Central Press opened an editorial office and small mechanical plant in New York to get faster distribution of news mat service in the east.

"King Features Service bought the Central Press Association in 1930, maintaining the Cleveland offices and plant, and moving the New York operations into King Features headquarters on 45th Street. Joseph V. Connolly managed the deal for King, and made the new assignments of personnel.

"Feeling myself still a young man, I used a part of my share of the proceeds to buy a small city afternoon daily in Massachusetts: the Southbridge Evening News. One of my first moves to improve the paper was to become a client of the Central Press Association."