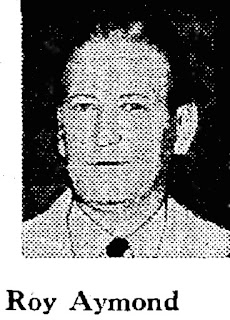 Roy Edmond Aymond was born in Bunkie, Louisiana, on October 6, 1895, according to his World War I and II draft cards. In the 1900 U.S. Federal Census, Aymond was the third of four children born to J.P.W. Sidney, a merchant, and Aureline. A photograph of the Aymond house is here.

The 1910 census recorded Aymond as the third of five children. The family were Bunkie residents. According to the Daily Picayune (New Orleans, Louisiana), October 22, 1911, Aymond won two awards for his pen drawings. The Times-Picayune (New Orleans, Louisiana), April 16, 1961, said “Mr. Aymond was graduated from Bunkie High School and studied cartooning in New York. At the age of 15 he joined a syndicate as one of the youngest cartoonists in America.” American Newspaper Comics (2012), said Aymond produced Letters Home, from February 24 to April 4, 1914, for the McClure Syndicate.

Aymond was a lodger in the Flanagan household in the 1915 New York census. The cartoonist resided in Manhattan, New York City at 439 West 23td Street. The status of his wife is not known. At some point Aymond moved.

Aymond’s movements were reported in the Natchitoches Enterprise (Louisiana), October 21, 1915, “Mr. Roy Aymond who has been the guest of his brother Walter, City Supt. of Water and Lights, for the past two weeks, left for Winnfield on Tuesday.”; and February 24, 1916, “The very cartoons that are attracted so much attention in The Daily States are the work of Mr. Roy Aymond, brother of our justly popular City Supt. of Water & Lights who served several years on the big dailies of New York, where his unusual talent attracted as much attention as it is now doing in Louisiana.”

The 1917 New Orleans, Louisiana city directory said Aymond was a cartoonist at the Daily States newspaper. The Motion Picture World, December 1, 1917, named Aymond as one of 39 cartoonists in the Universal Current Events film project.

Aymond signed his World War I draft card on June 5, 1917. The New Orleans resident lived at 2137 Boronne. Aymond said his employer was the Daily States Publishing Company. Aymond was described as medium height and build with blue eyes and blonde hair. The Times-Picayune said Aymond was an aviator and served with Capt. Eddie Rickenbacker in France. The New Orleans States (Louisiana), December 26, 1918, reported Aymond’s letter to Harry D. Wilson, commissioner of agriculture.


Corporal Aymond wrote that “Nancy reminds me of old New Orleans—some town.” He sent a few “silent tips” to Mr. Wilson and George Foster on French agriculture and how Louisiana might benefit. “Especially,” said Roy, “in the matter of saving fertilizer. You can usually tell the wealth of a French farmer by the amount of fertilizer he has on his farm.”

Corporal Aymond, as everyone will recall, was the cartoonist of the Daily States before he went to war. He is doing a little sketching in France and still retains his humor. His letter shows it:

“Bye, the bye, Harry, do you think my chances for governor are as good now as when I left. It not, Harry, I will nominate you for governor and we’ll make Lee Lanier secretary of state; that is with John Marshall’s consent. Give my regards to Gov. Pleasant and Mayor Behrman; I wonder who is drawing their likenesses on the editorial page of the Daily States now?’

The draft card said Aymond was married with a child who was a dependent. The child was Audrey May Aymond whose birth mother, Emily Wheeler, had died years earlier, according to the State Times Advocate, April 3, 1933. Audrey was raised by Aymond’s parents. While a student at Louisiana State University, Audrey drowned in the Amite River. Her death was also reported in State Times Advocate and Times-Picayune.

Aymond’s whereabouts after the war was mentioned in the St. Landry Clarion (Opelousas, Louisiana), August 9, 1919, “Roy Aymond and his mother of Bunkie, visited Mrs. W. E Aymond here last Tuesday. Mr. Aymond just recently returned from overseas as one of America’s aviators. He expects to return to his old position as cartoonist for the Daily States.”

The 1920 census said Aymond was in New Orleans where he roomed at 848 Carondelet. He was a newspaper cartoonist. The same address and occupation were in the 1921 to 1923 New Orleans city directories. From 1925 to 1928, Aymond resided at 410 Thalia.

The Times-Picayune, April 21, 1927, noted the marriage of Aymond and Myra Louise Stewart.

In the 1930 census, Aymond and his wife were in the household of his mother-in-law, Mamie Stewart, a widow. Aymond was an advertising cartoonist.

For the Times-Picayune, Aymond produced Louisiana Lore and Legend which was published on August 8, September 5 and October 17, 1937. 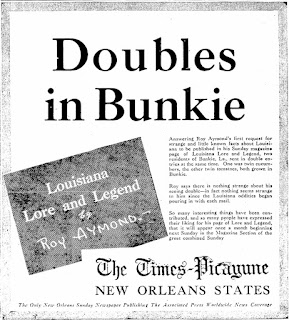 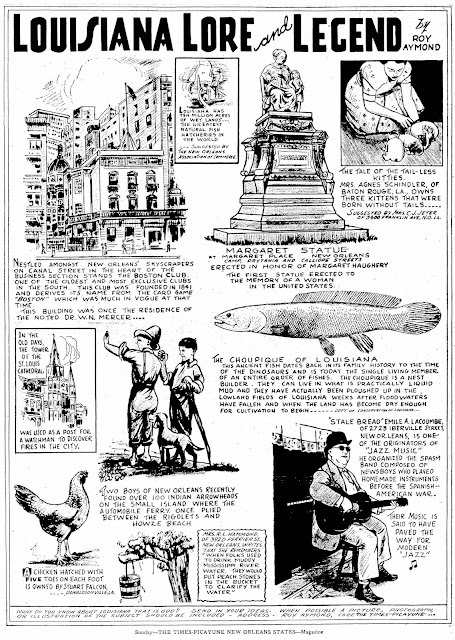 Aymond was a States newspaper cartoonist who lived at 1729 Coliseum Street in New Orleans, as recorded in the 1940 census and on his World War II draft card. The same address was listed in the 1956 and 1960 city directories.

Aymond passed away April 15*, 1961, in New Orleans. His death was reported by the Associated Press in the Lake Charles American-Press (Louisiana), April 16, 1961.


New Orleans (AP) — Roy E. Aymond, 65, former cartoonist for The New Orleans States, died Saturday after a heart attack. Aymond joined The States shortly after World War I and remained with the newspaper after it was bought by The Times-Picayune Publishing Co. He retired in August, 1945. During World War I he was an aviator and served with Capt. Eddie Rickenbacker in France. He worked briefly for the New York Sun. Aymond was a native of Bunkie where funeral services will be held Sunday. Survivors include his widow and two brothers, Dr. Branch Aymond of New Orleans and Dave L. Aymond of Bunkie.

The death notice in the Times-Picayune said in part:

Aymond was laid to rest at Pythian Cemetery.

* Information on the Pythian Cemetery gravestones were recorded in Stories in Stone (2006) by Alice Ducote Holland and Anne Ducote Plaisance. Aymond was buried in Section E, Row 56, Plot 7. The day of death in the book was April 14.