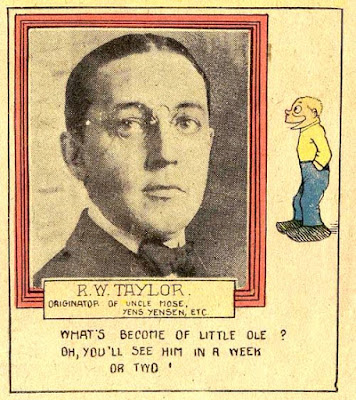 In the 1880 census, Taylor was the youngest of two children born to William, a gardener, and Mary. The family lived in Richmond, Indiana at 32 South Sixth Street.

The Evening Star (Washington DC), October 21, 1914, said a young Taylor stayed with an uncle in Chicago where he studied art and married.

A nearly identical listing was in The Annual American Catalogue 1898.

Taylor also illustrated the books, Uncle Jeremiah and His Neighbors at the St. Louis Exposition (1904) and Peck’s Bad Boy Abroad (1905) with D.S. Groesbeck.

Taylor has not been found in the 1910 census. Taylor passed away on October 21, 1914, in Washington, D.C. His death was reported that day in the local paper, the Evening Star.

Funeral services will be held at the house tomorrow afternoon at 5 o’clock, after which the body will be sent to the old home of the deceased at Richmond, Ind.

At the time of his death Mr. Taylor was employed on the Philadelphia North American, and came to Washington some weeks ago when he felt that he was gradually growing weaker and did not have much longer to live. Previous to this employment he was attached to the art staff of the New York World and the Chicago Tribune, his cartoons in the Sunday comic sheets giving thousands of children entertainment.

When a mere youngster, Mr. Taylor went to live at the home of an uncle in Chicago, where he had an opportunity of studying art. He showed steady progress, it is said, and at the age of twelve years his first comic cartoon was published by a newspaper. His progress was steady and within several years his cartoons became known in many parts of the country.

He married in Chicago several years ago, but shortly thereafter his wife became ill and after lingering for over a year died some months ago.


The body of Roy W. Taylor, a cartoonist, who died here Tuesday, was taken to Richmond today for burial. Mr. Taylor, who was thirty-six years old, was born and reared in Wayne county. He had been employed on the Chicago Tribune and the New York World, and was on the staff of the Philadelphia North American at the time of his death. His mother, Mrs. A. L. Marshall, of this city, survives him.