Writer Frank M. Young recently contacted me about a very intriguing mystery. He is engaged in writing a piece on cartoonist Dean Miller, most remembered (to me at least) as the second artist on the detective strip Vic Flint.

Young is in contact with Miller's family, and they told him that Dean Miller was further distinguished as the creator of a 1948 comic strip titled Mighty O'Malley Ex-Marine, which was syndicated by the Chicago Tribune. They produced as proof a photo of a Sunday strip, the only sample they have: 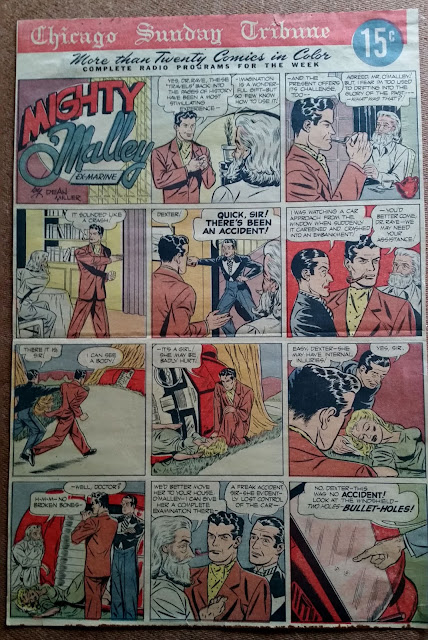 Young diligently searched for more information about this series, and came up with nothing. Which is why he came to me. Unfortunately I'd never heard of it either. But now we were both curious to try to solve the mystery.

The photo the family had originally offered to Young was rather blurry and was taken with the piece matted and framed (the one above is a sharper image out of the frame taken later). This led both Young and I to wonder if Dean Miller might have created a mock-up of the tearsheet for some reason, and that the strip was actually a red herring.  Although it looked genuine enough, how could a strip run in the Chicago Tribune have managed to so thoroughly escape the world's notice?

I asked Young to get the family to take a photo of the back of the sheet. Here's what we got (they took a pair of close-ups that don't quite stitch together): 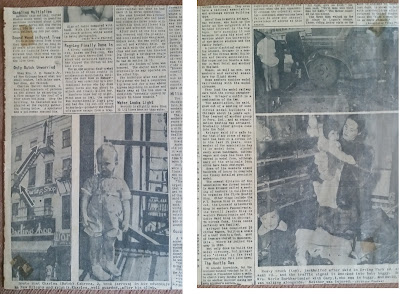 What at first blush looks like a normal newspaper page is shown to be quite unusual under closer examination. You'll note that the text on this page looks almost like it was created on a typewriter as opposed to professionally typeset. Does that mean it's a fake? Actually, no, it is a proof that the page is genuinely from the Chicago Tribune. In 1948, the Trib was going through a protracted strike by their typesetters, and much of the paper was typeset in exactly this way. Score one for Mr. Miller's veracity as a ChiTrib almunus.

Unfortunately, trying to date this page is troublesome. Since the Chicago Tribune archives on the web have a search engine that is blinder than Mr. Magoo, I was not surprised at my inability to find this page using any of a dozen different search terms. Most of the material here is syndicated 'evergreen' material, making coming up with a publication date troublesome. I checked other papers to see when they ran some of the stories:

That narrows it down nicely, and the one local story, the traffic accident, was reported in a few papers, one on 3/11, the other on 3/13. Since that story came from the Trib, I narrowed down my viewing to the editions of 3/11/1948 and earlier. Immediately I hit paydirt of a sort -- the story and photos appeared in the March 10 edition (http://archives.chicagotribune.com/1948/03/10/page/4/article/driver-hurt-as-auto-hits-trolley-track-depressions-blamed). Unfortunately, the rest of the page doesn't jive with the tearsheet supplied by Miller's family.

As a last ditch effort, I manually reviewed the editions for the rest of the week, especially Sunday which could well have repeated the story for readers who buy only the Sunday edition. No dice though. So how could the comic strip have been printed, yet not printed?


Frank Young offered up a final clue. He points out that the Sunday Tribune in 1948 was 10 cents in Chicago, and 15 cents elsewhere. This copy is plainly offered for 15 cents, with no mention of the in-town price. That means it was clipped from an out of town-only edition. Therefore it could be that Mighty O'Malley was printed only in the out of town edition, which is not the version that survives on microfilm. Although it is unusual for the two versions of a paper to be different in such a major way, it is by no means unknown. In fact, I've heard convincing evidence that the New York Daily News, the Trib's sister paper, had slightly different versions of the Sunday comics line-up at some points in its history.

That is as far as Frank Young and I can trace this mystery. Now we ask you good folks out there -- have you seen any samples of Mighty O'Malley Ex-Marine, and if so, what can you tell us about them? Does anyone know of an archive that has the Tribune's out-of-town edition?

Comments:
Thanks, Allan. Here's hoping someone in newspaper strip land can provide some more information. In the meantime, as we agree, it's a fascinating mystery.

This 1948 edition of EDITOR AND PUBLISHER has some kind of listing for MIGHTY O'MALLEY. But the snippet view is lmiited and almost unreadably small. Maybe someone has the physical issue?

Here's a 1946 comic with a "Mighty O'Malley" story, but credited to George Merkel. Could Miller actually be a later artist or could a title conflict have killed the comic or forced a title change?

Miller could have taken over the Merkle strip. A few years ago Alex Jay did an Inkslinger Profile on Merkle that has him passing away (March 12, 1948) at the time of this strip.
D.D.Degg

Hey Paul --
I'd swear I checked my E&P index and found nothing -- but on rechecking, it is there. Boy that O'Malley guy is sneaky!

And now glynis37 has found a comic book apparently reprinting some of the strips. Are the innards of that comic book online anywhere?

Thanks Brad! Seems like the character does seem to have been created by George Merkle. Now if we could only find it in a doggone newspaper besides the family's sole example.

I am Dean Millers great grandson. My grandmother made the story board of those clippings. I can ask her to dig around for more or if you have any questions for her, I can provide you with her email.

Hi Zak --
If she can find anything more about Mighty O'Malley that sheds light on the strip running dates or why it might have run only in the out-of-town edition, we'e all ears here. I imagine, though, that Frank M. Young has asked her all those questions already.

Here's a picture of him in front of a Christmas party tree decorated with Mighty O'Malley illustrations in 1948 when he started illustrating it
And a news paper interview about him. Mistakes in the paper : he was born in Springfield Missouri but grew up in Houston. Born July 7 1924 lied about his age to go into the military

"Vic Flint was scripted by Ernest Lynn (as "Michael O'Malley") and drawn by Ralph Lane..." probably where it came from. http://www.tcj.com/dean-miller-in-and-out-like-flint/

"Though Mighty O’Malley never became a major strip (a fate shared by other intriguing minor Tribune features of the era), it caught the eye of Ernest Lynn at NEA. After the strip’s 1949 demise, Dean Miller moved to Cleveland to work for NEA as staff artist. Thus, he was handy when Lane left Vic Flint. Lane’s last daily strip appeared on July 29, 1950; his final Sunday ran on October 8th. Miller first signed the daily on October 7th, over two months after he began his run. His first signed Sunday was the second he did, on October 22nd."