CAESAR'S A DOG WITH WIT, BUT IT ISN'T BITING KIND


If you had a pooch like Caesar, you'd go wild-but you d love him.

The big, affectionate mongrel of the Tribune comic strip has an uncanny skill in putting his paw right on his master weaknesses. Nary a human foible escapes him. But he has a few foibles himself.

Caesar never speaks, but he has an incredible ability to point up the silliness of a situation or his master's inadequacies. This ability has led his fans to wonder whether he is more human dog than he is doggy human being. Either way, Caesar's hilarious.

The man who puts Caesar thru his paces is William Timyn (signature: Tim), who knows the value of laughter after what he has been through in Europe in the last 13 years.

Grew Up in Vienna
Timyn, who is 52, has been a professional cartoonist more than 27 years, but his drawing experience goes back to early childhood in Turkey. He was born there, but four years later his pop moved to Vienna and became an insurance executive. Timyn grew up there.

The artist s early talent for drawing paid off; he began selling his cartoons to Viennese papers. By the middle '30s he had built up a prosperous business with European papers, which secured his work thru a syndicate in Amsterdam, Holland.

In 1938, the Nazis took control in Austria, and Timyn, like all other Jews, was subject to the purge which removed people of that race from public and semi-public positions. He began efforts to get himself, his mother, brother, and another relative to England. Before he could obtain visas, he was flung into a Nazi concentration camp.

Out of Prison-and In
Because he had not dabbled in politics, he finally was released and succeeded in getting to England. But, as soon as World War II broke out, he was slapped into a British concentration camp as an enemy alien.
After three months, the British let him out. But the confinement had broken the newspaper connections he had been able to build up in England. He started again. 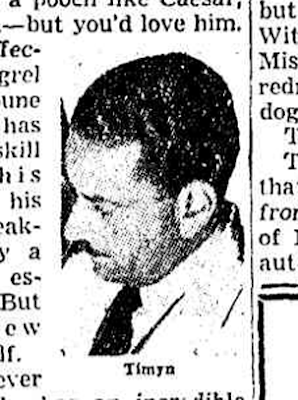 During these ups and downs, Timyn never forgot how to laugh. He became a commercial artist, did portraits, knocked out patriotic cartoons. After the war, he submitted to the London Sunday Graphic a comic strip involving a dog. However, the dog did not get the emphasis. The master did.

The editor said he liked the dog but took a dim view of the master. With the advice of an associate, Miss Billie Cooper, the cartoonist redrew the strips and made the dog the main wheel.

There was a rumor for a time that Caesar had inherited blood from every canine since the days of Dido and Aeneas. Then came authoritative word from London, where the artist works: The pup started out to be an English setter, but in some fashion a little Dalmation sneaked into the picture.

Caesar has won his way into the hearts of lots of folks besides Chicagoans. He is bringing chuckles to readers in Italy, Brazil, Australia, Finland, Switzerland, Argentina, France, Sweden, and Denmark, as well as in Great Britain and all over the United States.

Readers love the shaggy mutt for his big heart, for his timidity, for his unspoken twitting of the human race. The canine comedian is a pooch without pedigree, a kennel club wallflower, a lovable lummox. He has flap-and-flop ears, a Cyrano schnozzle, and a bark with no bite in it.

When his master tries to teach Caesar to fetch things, Caesar teaches him to do it instead. The dog carries a first aid kit when the boss goes skiing. He growls at a puppy, eying his bone, but he chases bums off a park bench when an old man with an injured leg wants to sit down. He goes around patting kids and kittens on the head, is gracious to stray sparrows, and helps the nurse push the baby buggy.

If your dog doesn't remind you of this delightfully daffy four footed wit without words, there are two probabilities: 1-You don't act enough like a doggy human being to inspire him, or 2-there just ain't another dog nowhere like Caesar.

Comments:
The Tribune seems to have misspelled the artist's name, who usually signed "Timym". Actually, there was a whole page on the artist in the Chicago Sunday Tribune 1952/12/07 ("Growing up with Caesar"), where he is called "Timym".

But then, he surely changed his first name, when he came to England ("William" is not an Austrian name, his original name might have been "Wilhelm" or something similar), maybe he also slightly changed his surname.

As a side note: several sources (among them the Chicago Sunday Tribune article quoted above) say that he drew a strip in the 30s titled "The Boss". In "American Newspaper Comics", under "735 Boss, The (2)" there's the following note: "SCS says Tim is a pseudonym for Louis Mitelberg". I doubt this: though Louis Mitelberg also used "Tim" as a pseudonym, this one probably is William Timym.

Thanks Hans, I could plead that I was just transcribing the article as printed, but I also have his name as Timyn in my book as well. So I'll fix things in my database to reflect the apparently proper spelling.

As for "The Boss (2)", that again is just me passing along information from another source. I'll add a note that it could also well be Timym. I really need to dig up some samples of that strip to see if art spotting would be any help.