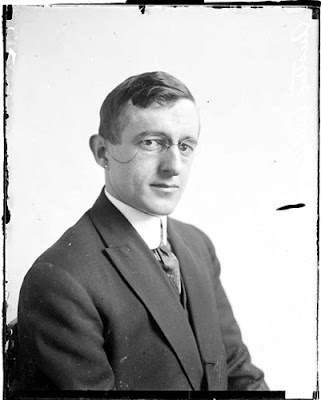 Austin Clyburn Williams was born in Westville, Indiana, on May 12, 1888, according to his World War I and II draft cards. His full name was found at Find a Grave, although the middle name spelling was different on the World War II draft card, “Clybourne”. An Ancestry.com family tree said Williams’ parents were Charles Madison Williams and Virginia Adelaide Clyburn.


“Father ran a drugstore at Westville, Ind., and intended to have me follow in his footsteps. In fact, he determined I should start following right away, when I got fired from school for drawing pictures of the teacher.
“But a littler later, I convinced him that the place for me was the Chicago Academy of Fine Arts, and I attend that school for three years.

“When I got out, I was strong for newspaper work but Fate again stepped in. I had such a facility for lettering and there commercial work that before I knew it i was buried under orders for stuff of that nature. The longer I sang the praises of Smothery Soap and Timpkins’ Toothpicks the deeper i got, and the farther away from newspaper work.

“Finally, in 1913, I made made a mad leap out of the mess and landed on the Chicago Daily News. I spent four years there, doing sporting and general cartoons….”

The 1913 Chicago city directory’s artist listings said Williams was at 58 West Washington. On October 1, 1913, Williams married Mary Mary Mcilhargey in Detroit, Michigan, according to the Michigan marriage record at Ancestry.com, which said Williams was a sign writer.

American Newspaper Comics (2012) said Williams produced Red and Skeeter for the Chicago Daily News. The strip ran from March 20 to June 19, 1915. The June 5 strip was by Pierre J. Kinder. Some time in 1917 Williams continued Ted Brown’s strip The Inventor which ended June 30, 1917.

Williams was one of several artists whose name appeared in a Chicago Academy of Fine Arts advertisement in Cartoons Magazine, April 1917.

Williams signed his World War I draft card on June 1, 1917. He, his wife and child resided in Chicago at 6643 Drexel Avenue. The Chicago Daily News cartoonist was described as short and slender with dark brown eyes and hair.

Cartoons Magazine, September 1917, reported Williams job move: “Austin C. Williams has resigned his position on the art staff of the Chicago Daily News, and has gone to the Detroit Free Press”

Newspaper cartoonist Williams was a Detroit, Michigan resident in the 1920 census. His three children were named Mary, Helen and Richard. The family resided at 69 Gladstone Avenue. About a month after the census enumeration, the Editor & Publisher, February 19, 1920, reported the passing of Williams’ wife: “Mrs. Austin C. Williams, wife of a Detroit Free Press staff artist, died in Detroit last week of bronchial pneumonia.”

An Ancestry.com family record said Williams married Alberdina Weert on October 12, 1922. Another family tree had the first name as Alberta.

The 1930 census recorded newspaper artist Williams and family at 14108 Mark Twain Avenue in Detroit. Williams was a commercial artist in the animation department of a picture company according to the 1940 census. He and second wife “Bertha” had two children, Betty Jane and Jack. The family of five, which included son Richard, lived in Detroit at 14428 Lauder Avenue.

Williams’ address was the same on his World War II draft card which was signed on April 27, 1942. Williams was employed by the Montgomery Ward Company.

The family tree said Bertha passed away in 1964.

Williams passed away May 6, 1976, in Pontiac, Michigan, according to the Michigan death index. He was laid to rest at Mount Olivet Cemetery.