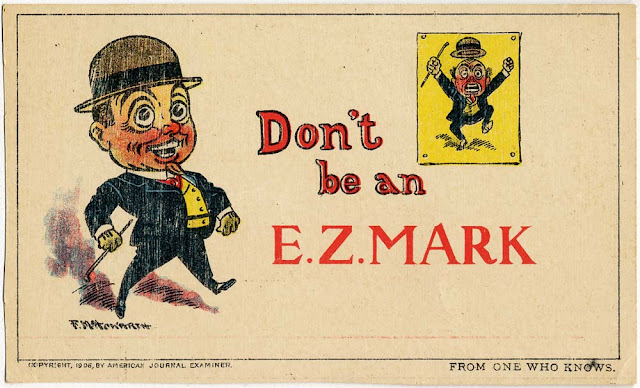 One of F.M. Howarth's longest-running series, Mr. E.Z. Mark, makes an appearance on a card that was a complimentary gift from a Hearst newspaper. There's quite a few cards of this type, and I don't know if they were given away in Sunday editions, or with a subscription, or what. This one is marked "Compliments of New York Sunday American & Journal" on the reverse. As you can see on the front, this card was issued in 1906.

Comments:
Actually in reference to the earlier "Wish You Were Here" about the chorus girl.

Irving Berlin wrote a song in 1911 titled "How Do You Do It, Mabel, on Twenty Dollars a Week?" It's about a rube asks his girlfriend -- who moved to the city and became a chorus girl -- how she manages a flat, a motorcar, jewelry and the rest on her paycheck. The joke of the song is that he's honestly amazed and curious , not suspicious.

Max Morath, a ragtime pianist / vocalist / historian, included the song on one of his albums.

The postcard predates the song, and it seems to offer a choice of interpretations: The flamboyant chorus girl's $8.50/week is supplemented by a stage door Johnnie (note she appears to be pulling a banknote from the bouquet); or the high-rolling Johnnie is the one who's living beyond that paycheck (in his dreams? The question is "How CAN you do it? ). The ambiguity may be intentional to dodge complaints.

Bon vivants and girls from the stage seem to go way back as a subject for racy humor; perhaps because theatricals were somehow neither actual prostitutes nor local good girls being corrupted. Fantasy figures, if you will.