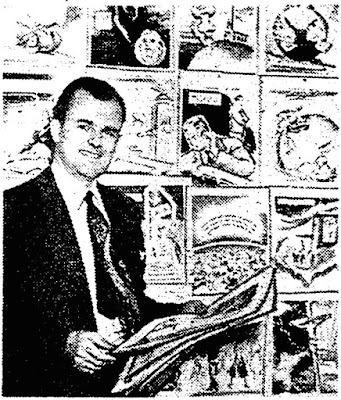 Jack Beaumont Hamm was born in Elkhart, Kansas, on March 5, 1916, according to Who’s Who in the South and Southwest, 1971–1972 and his Social Security application at Ancestry.com. His parents were Ted Beaumont Hamm and Hazel Trotter.

The 1920 U.S. Federal Census said Hamm was the oldest of two children whose father was a clothing store merchant. The family of four resided in Taloga, Kansas, on either Orchard or Stillman Street.

The Hamm family added another child in the 1930 census. They were Wichita, Kansas residents at 2109 East Kellogg.

Who’s Who said Hamm was a member of the Wichita Art Association in 1932 and attended the Moody Bible Institute in 1935. Hamm attended the Frederic Mizen Academy of Art, in Chicago, from 1936 to 1937. Hamm was listed as a student in the 1938 Wichita city directory. His address was 132 South Minneapolis Avenue.

The same address was recorded in the 1940 census. Hamm continued to live with his parents and siblings. Hamm was a commercial artist at an engraving company. The census also said he completed four years of high school.

According to Who’s Who, Hamm illustrated Albert Edward Wiggam’s Let’s Explore Your Mind from 1940 to 1944. American Newspaper Comics (2012) said the series began November 21, 1932, with art by Raymond Flanagan, who was followed by Hamm. The next two named artists were Ray T. Chatton and Bill Lignante. Who’s Who said Hamm was a cartoonist with the Newspaper Enterprise Association from 1942 to 1944. Profiles at Christian Comics International, Grace Bible Fellowship and WacoTrib.com said Hamm also assisted on the strips Alley Oop, Boots and Her Buddies and Bugs Bunny. In addition, the Dallas Morning News (Texas), August 14, 1949, said Hamm worked on Story of the Stars, Red Ryder, Major Hoople and Out Our Way.

Who’s Who said Hamm married Dorisnei Alexander on May 12, 1943. The Alabama marriage index, at Ancestry.com, recorded the marriage of a “Jack B Hamm” on August 29, 1943. According to Hamm’s World War II enlistment record, he was an Alabama resident who enlisted in Dallas, Texas, November 3, 1944. The Morning News said Hamm was an army cartoonist in Alaska and the Aleutian Islands.

In 1946 Hamm completed his military service and became an instructor at Baylor University where he earned his Bachelor of Arts in 1948. The Morning News, July 18, 1948, reported the the new faulty staff.


Jack Beaumont Hamm, native of Wichita, Kan., studied with Frederick Mizen, Art Academy, Chicago. He worked for the National News Service Syndicate and the Newspaper Enterprise Association at Cleveland, Ohio, as a cartoonist. For some time he has done the drawings for the Wiggins [sic] cartoons, “Let’s Explore Your Mind.” He does a regular Sunday feature strip for the Waco News-Tribune.

According to the Morning News, August 14, 1949, Baylor joined the staff of television station KBTV. The December 4, 1949 Morning News said:


The Jack Hamm Show, a 30-minute weekly production over KBTV, is slanted toward the adult audience. On this program Jack Hamm, nationally known cartoonist, has created a loyal following with his personality caricatures, musical illustrations and “Name the Face” contest.

…A favorite trick of Cartoonist Hamm is to illustrated a classical or popular song hit while the music is playing in the background. He delights his audience by always completing his drawing at exactly the same instant the music ends….

A profile of Hamm, in the Omaha World-Herald Magazine, July 6, 1952, was about his weekly religious cartoons.


“…He draws religious cartoons which he sends free to 331 newspapers in 42 states and several foreign countries….he draws the truths of the Bible as related to modern events. He puts a scripture quotation on every cartoon.”

Hamm’s wife handled the mailing of the cartoons on Saturday. His freelance work paid for the printing, postage and related costs.

Hamm passed away December 22, 1996, in Dallas, according to the Social Security Death Index. Hamm was laid to rest at Gordo City Cemetery. An obituary was published in the Wichita Eagle, (Kansas), December 24, 1996.

Comments:
Alex, Thank you for this wonderful bio of Jack Hamm and for referencing my FBSM blog article. Do you eventually plan to do a biographical encyclopedia or dictionary of American cartoonists?