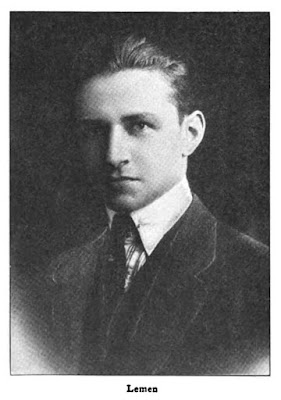 Joseph Robert Lemen was born in St. Louis, Missouri on August 20, 1890, according to his World War I and II draft cards. In the 1900 U.S. Federal Census, Lemen was the youngest of two children born to Joseph Robert, a physician, and Ida. The family resided in St. Louis at 3223 Lucas Avenue.


“I went to the St. Louis Art School for two years,” he says, “most of the time studying painting. That was not the beginning of my art education, however, as I can remember feverishly drawing battleships and soldiers during the Spanish-American war, although I was only seven or eight years old at the time.

“I assure you I never did a bit of work at school, but spent my time decorating my books with handsome illustrations. “After leaving school I worked in a real estate office, a jewelry house, and a brick plant. Bricks, however, didn’t seem to be to my tastes, and I entered art school. After about two years I married, and needless to say started looking for a job. I landed on the Post-Dispatch where I have been about five years.

“My favorite sport is going to the theater or any other place where I can study human nature. I am also very fond of reading, and must confess I enjoy a good book more than a baseball game.”

The 1909 and 1910 St. Louis city directories listed Lemen as a Post-Dispatch artist whose address was 3906 Olive. The 1910 census said Lemen was in his father’s household in St. Louis at 4451 Washington.

Lemen’s marriage was reported in the St. Louis Star and Times (Missouri), October 12, 1912.


Marriage in Secret Shows Art’s Romance
The secret marriage four months ago of Robert Lemen, Jr., 5401 Cabanne avenue, and Miss Constance Andrews of Webster Groves, who were both pupils of the St. Louis Art School, Washington University, is another example of the proverbial romantic nature of the true artist, their friends say.

The young couple were married on June 14 at the home of the Rev. M.H. Lichllter, 5545 Maple avenue, but so closely was the secret held, that not until a few days ago did it become known.

In the meantime the bride had continued to be active socially, accompanying Colonel and Mrs. E.J. Spencer to West Point, where she was a general favorite at the commencement festivities.

Young Lemen has proudly announced his intention of gaining fame and fortune as an artist, and it is said he will be connected with one of the local newspapers. The couple in the meantime will continue to make their home with his parents.

Young Mrs. Lemen was given publicity come two years ago, when a surgical operation to correct her hip joint was performed by a famous Austrian surgeon who had been brought to this country for the purpose of operating similarly on Miss Lolita Armour, daughter of the millionaire Chicago packer.

Lemen signed his World War I draft card on June 5, 1917. His home was at 405 Orchard Avenue in Urban Grove, Missouri. Lemen, a Post-Dispatch artist, claimed his wife, child and mother as dependents. He was described as medium height and build with blue eyes and brown hair. Lemen’s address in the 1917 St. Louis directory was 6315 Cabanne Avenue.

Lemen, his wife, Constance, and son, Joseph Robert, Jr., were St. Louis residents in the 1920 census. Their home was at 6021 Pershing Avenue. 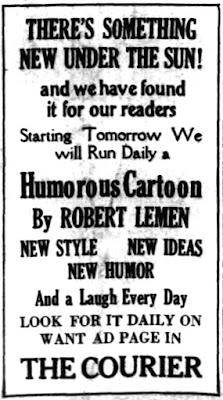 Lemen has not yet been found in the 1930 census. His wife, Constance, and two children, Robert and Margaret, were in St. Louis at 405 Orchard Street. Constance’s marital status was recorded as widow.

Lemen has not yet been found in the 1940 census. He signed his World War II draft card on April 27, 1942. He was self-employed and worked at home, 4013 Sunset Boulevard in Los Angeles, California.

Lemen passed away August 14, 1955, in Los Angeles, according to a family tree at Ancestry.com.