Edward A. “Ed” Kudlaty was born in Cleveland, Ohio, on November 21, 1916. His birthplace is based on the census and birth date is from the Social Security Death Index.

In the 1920 U.S. Federal Census, Kudlaty was the last of eight children born to Michael and Anna, both emigrants from Galicia, Austria. His father was a laborer at a furnace. The family resided in Cleveland at 1603 Branch Avenue.

The 1930 census recorded the Kudlatys in Cleveland at 4219 Woburn Avenue. An indication of Kudlaty’s talent was mentioned in the Cleveland Plain Dealer (Ohio), June 2, 1936.


Announcement was made yesterday by Henry Hunt Clark, director, of the result of the annual competitive examination in the senior classes of public and parochial high schools of Cleveland and nearby cities for scholarships in the Cleveland School of Art.

Honorable mentions were given to: …Edward Kudlaty, 4219 Woburn Avenue S.W….

Ninety students entered the contest. Their work was judged by Clark, Otto F. Ege, head of the teacher training department; Alfred Mewett, registrar, and Alfred Howell, supervisor of art; Cleveland Board of Education.

The same address was in the 1940 census which said Kudlaty completed four years of high school. His occupation was laborer at a brass factory. Kudlaty enlisted in the army April 1, 1941. Details of his service are not known. Kudlaty was discharged September 18, 1945.

After the war, Kudlaty furthered his art training. The Cleveland Plain Dealer, June 3, 1947, reported the graduation of the School of Art.


Students in the largest graduating class in history of the Cleveland School of Art will receive diplomas this afternoon in the auditorium of the Museum of Art, beginning at 3:30.

…Nothing has been left out of the essential training of art students, as is apparent by the long list of graduates with the subjects in which each of them majored, and there remains a familiar ring in such titles as design, illustration and design, teacher training, advertising art, industrial design, handicrafts, sculpture, mural painting, and painting.

Graduating in these subjects are: …Edward A. Kudlaty…

The Cuyahoga County, Ohio, Marriage Records and Indexes, at Ancestry.com, said Kudlaty married between 1946 and 1948. Cleveland city directories in 1950s listed artist Kudlaty and his wife, Veronica, at 10614 Snow Road. The same address was in telephone directories in the 1990s into 2002.

The date of Kudlaty’s employment with the Newspaper Enterprises Association (NEA) is not known. American Newspaper Comics (2012) said Kudlaty drew the Story of Old Glory from June 9 to 14, 1952. It was written by Jay Heavlin. His next NEA series was Generals Who Became President which was written by Ray Ellis. Their strip ran from January 12 to 19, 1953. Kudlaty and writer Russ Winterbotham produced the Kit Carson strip from October 12 to November 8, 1955.

Kudlaty covered the 1954 trial of Dr. Samuel Sheppard. Photographs of his NEA courtroom drawings are at the Library of Congress.

Kudlaty’s portrait of Pope John XXIII was published in many newspapers including The Kokomo Tribune (Indiana), November 4, 1958. The portrait was also available for purchase. 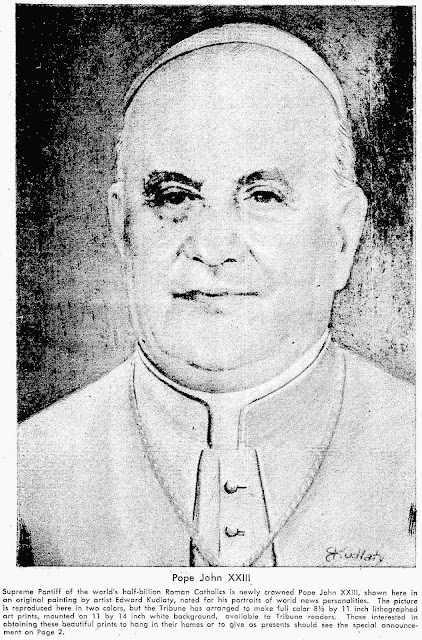 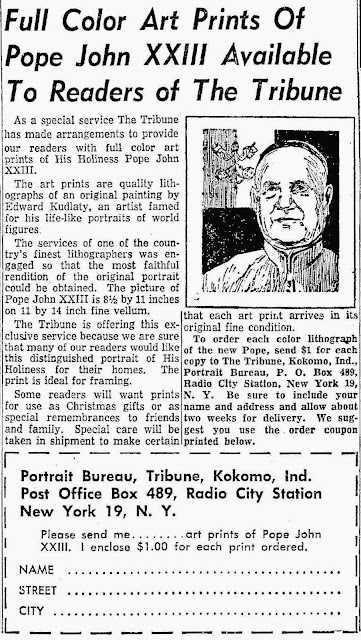 During the 1964 presidential election, Kudlaty drew Conventions and Crisis which featured first, the Republicans, followed by the Democrats.

In 1973, Don Oakley and Kudlaty produced the 12-part A Splendid Little War. The next year, Kudlaty drew the six-part Gerald Ford: The Man from Michigan. For the 1976 presidential election, Kudlaty drew Conventions in Crisis which reused some of his art from the 1964 series, Conventions and Crisis. 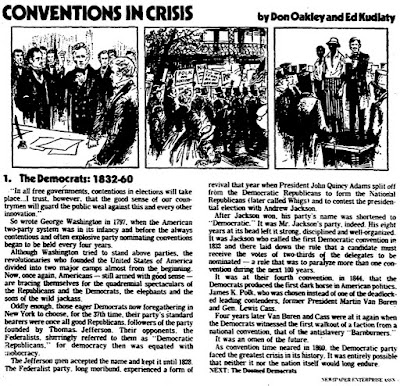 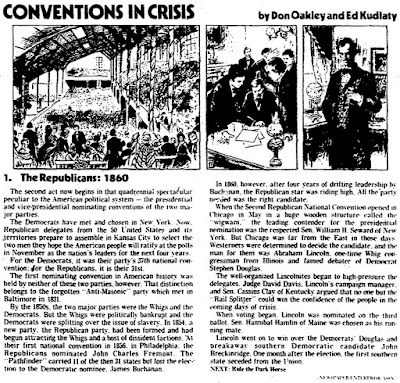 Kudlaty’s wife, Veronica, passed away July 15, 1996. Eleven years later, Kudlaty passed away December 13, 2007, in Cleveland. Accordng to the death certificate, Kudlaty was an NEA artist who had a bachelor’s degree.