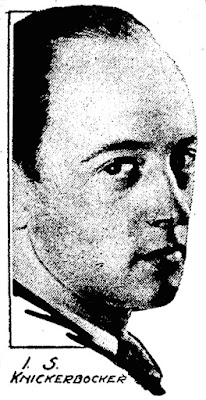 Irving S. Knickerbocker was born in Auburn, Washington, in January 1898. The birthplace was mentioned the Cleveland Plain Dealer, January 27, 1930. The birth date was recorded in the 1900 U.S. Federal Census which said Knickerbocker was the youngest of two children born to Irving, a lawyer, and Olivia. The family resided in Auburn on Silver Street. The Knickerbocker branch of a family tree can be seen here.

The 1910 census said Knickerbocker had two more siblings, and his maternal grandmother was part of the household. Auburn was still their home. The Plain Dealer wrote about Knickerbocker’s activities in this decade.


He started out to find adventure when a youth and worked on a farm in New York state, was a saw flier in a lumber camp, worked on a railroad and did many things. He served with the medical corps in France in the World War.

The Rockford Morning Star (Illinois), January 29, 1930, said, “After the war he spent some time as a sailor on an ocean liner and then came ashore and studied art.” Additional information was found in the Seattle Daily Times (Washington), January 30, 1930: “He graduated from Auburn High School in 1916 and served overseas during the two years following. Returning he became active in Seattle shipping and commercial life, until going to Ohio.”

According to the 1920 census, Knickerbocker, unemployed, and two younger siblings lived with their parents in Auburn at 700 West Second.

In the mid-1920s, Knickerbocker moved to Cleveland, Ohio. Cleveland city directories listed him at 2019 Brown Road, in 1926, and 1351 West 76th, in 1929. Knickerbocker worked for the Newspaper Enterprise Association (NEA). He signed his work “Knick”.

American Newspaper Comics (2012) said Knickerbocker created and worked on several projects for the NEA. Knickerbocker was the second of six artists on the weekly strip, Bugs, which started on March 12, 1924. Following Roy Grove, Knickerbocker’s run was from November 11 1925 to April 7, 1926. He was followed by Charles D. Small, George “Swan” Swanson, Arthur Sefcik and Don Wootton. Little Joe Says was started by Storm, who was followed by Larry Redner. Next was Knickerbocker who worked on it in 1926 to March 7, 1930.

Knickerbocker’s The Papers Say started April 21, 1926 and ended January 13, 1927. The Tinymites was written by Hal Cochran and debuted October 8, 1926 with artist Larry Redner. Knickerbocker took over from January 10, 1927 to February 18, 1930. He was followed by Joe King and George Scarbo. The art on Ad Fables (1928) resembles Knickerbocker’s style.

Knickerbocker drew J. Disraeli (Dizzy) Dugan (aka Dizzy Dugan), which was the Sunday topper to Salesman Sam, from October 9, 1927 to March 23, 1930. Mac (aka The McCoys) was created by Knickerbocker who produced it from May 10, 1929 to March 7, 1930. It was continued by Munch, Howard Boughner and Bob Moyer.

Knickerbocker passed away January 26, 1930, in Cleveland, as reported the following day in the Plain Dealer. In an automobile accident, his “...skull and jaw were fractured and his lung punctured.“ “…He died in St. John’s Hospital several hours after the accident.”

The Morning Star added the following about Knickerbocker’s death.


Two coincidences, striking in the light of the tragedy that befell him, marked his last day of life.

Just before leaving his office for the last time, “Knick” dropped five “Tinymite” drawings on the desk of Hal Cochran, NEA art director, and remarked, “Well, that’s ‘30’ for me.” “Thirty” is the newspaper expression for “the end.”

The last sports cartoon Knickerbocker drew appeared on the day of his death. Over it Knick had written the heading, “It Was Fun While It Lasted.”

Knickerbocker was laid to rest at Mountain View Cemetery in Auburn, Washington.