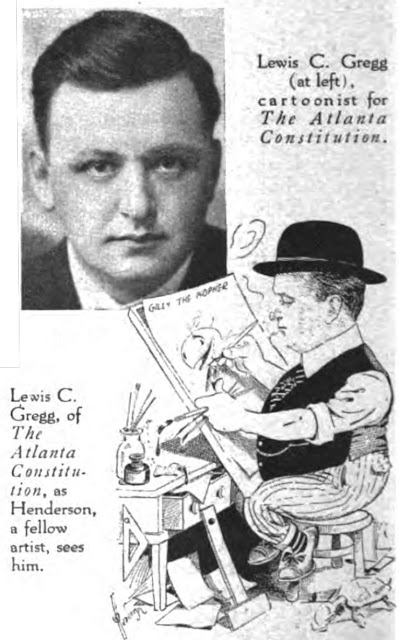 Lewis Crumley Gregg was born in Atlanta, Georgia, on October 9, 1880. Gregg’s full name and birth date were recorded on his World War I draft card. His birthplace was named on a 1930 passenger list. Gregg’s parents were William Alanson Gregg (1848–1895) and Elizabeth Luckie Gregg (1859–1952). The 1880 U.S. Federal Census was enumerated four months before Gregg’s birth. Gregg’s parents and paternal grandmother resided in Atlanta on Pulliam Street. His father was a hardware merchant.

Specific information about Gregg’s education has not been found. The Atlanta Constitution, July 30, 1916, said Gregg studied at the Art Students’ League in New York.

Gregg’s widowed mother was the head of the household in the 1900 census. Art student Gregg was the oldest of six siblings. Everyone resided in Atlanta at 176 Rawson.

Around 1901, Gregg joined the Constitution newspaper staff. Gregg’s work was collected in Cartoons by Gregg (1904).

City directories from 1903, 1905, 1907 and 1909 listed Gregg as a Constitution artist who resided at 176 Capitol Avenue which was the address in the 1910 census. Gregg, his mother and five siblings lived there. The 1915 city directory had the same address for Gregg.

American Newspaper Comics (2012) said Gregg produced Gilly the Gopher (a gopher tortoise), for the Constitution, which ran it from April 9, 1912 to January 22, 1913, plus a one-week return June 28-July 2 to advertise a reprint book published by the Cole Book Company.


Cartoonist Gregg Married
Lewis Crumley Gregg, cartoonist for the Atlanta (Ga.) Constitution, was married to Miss Mamie Ansley in Atlanta on the evening of October 11. Mr. Gregg, for fifteen years connected with the art department of the Constitution, is a graduate from the Art Students' League of New York. He is better known to the newspaper world and to the public as the originator 'of the famous “Gopher,” the little animal which appears in all of his cartoons. Miss Ansley, now Mrs. Gregg, is one of the leaders in Atlanta’s social set. She is the daughter of Edward P. Ansley, a prominent real-estate man of that city. Immediately after the ceremony Mr. and Mrs. Gregg left for New York, where they spent their honeymoon.

The Macon Telegraph (Georgia), July 11, 1929, noted Gregg’s plan to study abroad: “Lewis C. Gregg, for 26 years a cartoonist with the Atlanta Constitution, sails tomorrow from Jacksonville for a year of study in Paris and London. He will be accompanied by Mrs. Gregg.” Passenger lists at Ancestry.com said Gregg departed July 23, 1929 and returned August 21, 1930.

City directories for 1938 and 1956 and the 1940 census said Gregg was a portrait painter who continued to live in Atlanta at 30 Polo Drive.

Gregg passed away March 19, 1957, in Atlanta. He laid to rest at Oakland Cemetery.