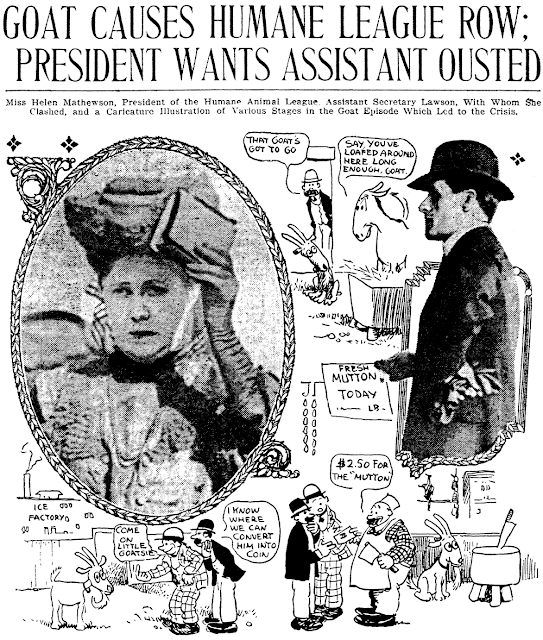 January 26 1909 -- Here's an example of yellow reportage at the local level. It seems that the local humane society was contacted by an ice company. They said that they were sick and tired of an ill-behaved billy goat they own, and for the society to come pick him up. (Why an ice company keeps goats is not explained.) So George Lawson, a director of the society, tasks one of the pound keepers, H.C. Stubbe, with going out to collect the animal.

Stubbe gets to the ice company, and (he claims) he tells the people there that he can get $2.50 from a certain  local butcher for this nasty goat. They respond, supposedly, that he is welcome to take the goat to the butcher and reap the profit himself. Which he does.

When Lawson gets wind of what happened, he sacks Mr. Stubbe for not following his duty to the humane society, but operating for his own benefit. Mr. Stubbe contends he was within his rights because the goat was offered to him privately. Lawson quite rightly sees that any time Mr. Stubbe can realize a financial windfall from an animal, that the society will never see it if he allows this behavior, so he is unmoved. Apparently Mr. Stubbe then offers the $2.50 to the society to get himself out of trouble, but Lawson still wants him gone.

Mr. Stubbe then goes crying to the ladies in charge of the society, including president Helen Mathewson. The tender-hearted ladies take pity on him and say he can stay on. When Lawson finds Mr. Stubbe showing up for work the next day, and finds out that Mathewson overrode his decision, he makes the case to them that he has to maintain discipline and that reinstating Mr. Stubbe has made it impossible for him to be taken seriously by his employees. Well, Mr. Stubbe must be a VERY persuasive fellow, because the result was that Mathewson is now considering letting go of Lawson to "maintaion harmony."

An interesting enough story, indeed, but the paper is having much too much fun concentrating on the billy goat angle, which is at best a side-issue, and turning a leadership problem into a circus.

Comments:
clearly you will need to read my book, THE GOAT GETTERS, which should be out from IDW/Ohio U Press within a year from now.
;-)
Eddie