Lawrence Carmine “Larry” Tullipano was born in Port Chester, New York on October 2, 1912, according to his Social Security application. Tullipano was also known by the first name Lorenzo.

The 1920 U.S. Federal Census recorded Tullipano as the oldest of two sons born to Salvatore and Amelia, both Italian emigrants. His father was a laborer. The family resided in Rye Township, Port Chester Village, Westchester County, New York, at 125 Purdy Avenue.

In the 1925 New York state census. the Tullipanos lived in Rye at 63 Spring Street. The census enumerator misspelled the family name as “Dulipano”.

Tullipano has not yet been found in the 1930 census. A 1932 Rye city directory listed “Lorenzo Tullipano” in the business section under “Sign and Card Writers”. In the directory’s residential section was “Lorenzo Tullipano sign painter” and “Lawrence Tullipano salesman Aschman Shoe Company”. All resided at 63 Spring Street. 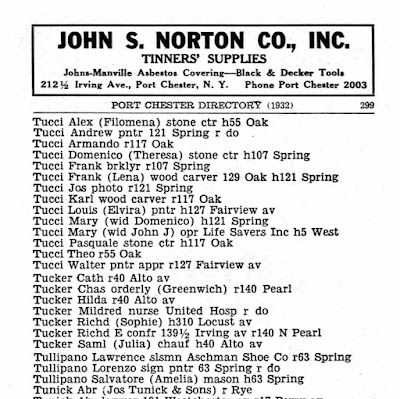 According to the 1940 census, Tullipano was the head of the household which included his brother and grocery store manager, Arthur, and an aunt, Antoinette Di Raffaele. Tullipano was a sign painter operating a sign store. They lived at 63 Spring Street.

During World War II, Tullipano enlisted in the army March 23, 1944. He was married and a commercial artist who had two years of high school education.

American Newspaper Comics (2012) said Tullipano was one of Lank Leonard’s assistants. Leonard, who also resided in Rye, was a sports cartoonist who created the strip Mickey Finn which ran from April 6, 1936 to November 29, 1970. The McNaught Syndicate strip was continued by Morris Weiss, another assistant, from November 30, 1970 to September 10, 1977. During Mickey Finn’s run, a character named Tullipano was mentioned and appeared in the 1945 strips dated January 17 (below), 18, 19, 20, 24 and 25 (below).

Tullipano also worked at Timely Comics the forerunner of Marvel Comics. In Alter Ego #22, April 2003, Jim Amash interviewed artist Rudy Lapick who was on staff at Timely. Lapick recalled when he was fired in 1948 and spoke to Al Jaffee:


I asked him, “You didn’t can Larry Tullipano [a staff inker]?” Jaffee said Tullipano had a wife and kids so they kept him. I said, “Every time a mistake was made on a job, whose work was it? Larry Tullipano. And who corrected it? Me! You sent all his work to me to fix, but you kept him and let me go.”

Jaffee told me to wait in the bullpen and he went to Stan [Lee] and came back, “You’re rehired, but in the event we have to let more guys go, you’ll be the first.” But I stayed on until they let everybody go in 1950.


Kenneth Tullipano who has been doing supergraphic painting for three years, is a 26-year-old graduate of SUNY at New Paltz, where he studied graphic arts.

Tullipano, who grew up in Port Chester, comes by his talent naturally. His father is a commercial artist and sign painter by profession and a painter of oils by avocation.