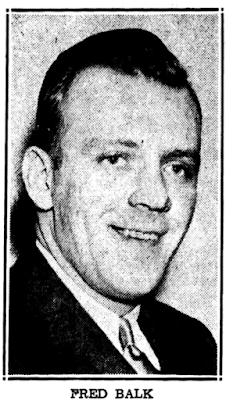 "Punky," a real, wholesome, natural and human little boy makes his bow to readers of the Harrisburg Telegraph and a half hundred other newspapers throughout the country today.

But "Punky" will mean more to Harrisburgers than to other communities since his creator, Fred Balk, lives here.

There is an interesting story behind the story of "Punky." Mr. Balk like many children preferred pencil and chalk to other playthings of childhood. He sketched continuously on walls, floors, books, pads, ceilings when he could reach them. His school days were tragically interrupted by the slaying of his father, a sargeant (sic) of Chicago detectives who fell in line of duty when the artist-to-be was ten years of age. Mr. Balk had to go to work but he arranged to attend continuation school and later completed a course in the Academy of Fine Arts. He then struck out on his own as an artist but the world turned down his offerings. Finally he returned to his instructor with turned down samples of his wares and asked: "What's the matter with these?"

The instructor countered with, "Fred, why don't you take up prize fighting?"

And Fred did. Scaling 6 feet, one with a weight of 195 pounds he added boxing for good measure.

Always memories of two nephews, his favorite boys guided his pen. And in February last year magazines started buying his output. Since then he has sold thirty-seven panels to the Saturday Evening Post -- one appears in the current number, a great number to a score and more of other magazines.

Mr. Balk cannot determine the exact date of Punky's birth but he believes the little chap has been a part of him since the days of his own frustrated youth. He made a series of Punky's daily activities, submitted them to the Associated Press which immediately accepted.

Mr. Balk is married but Punky is his only son.

And to him Punky is a real flesh and blood little boy.

Mr. Balk was born in Chicago and lived most of his life in New York. He resided in Bloomfield before moving here three years ago.

Mr. Balk was the creator of the cartoons "Gramps," "Doc" and "Punky."

He was a member of the Audobon Society in the Pine Ridge section of the township.

The Anderson & Campbell Funeral Home, here, is in charge of arrangements. 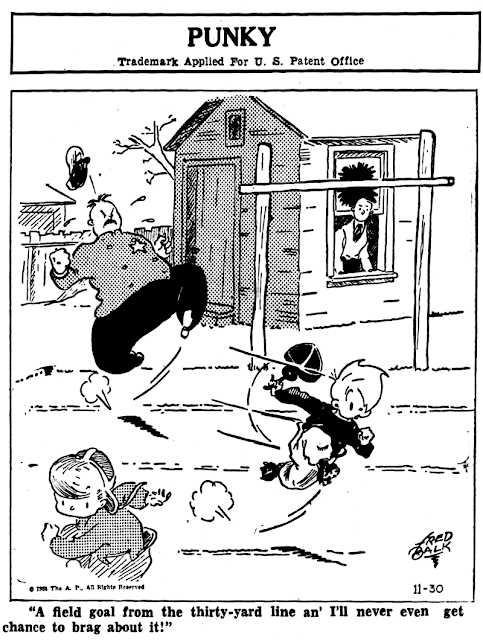 Thanks to Art Lortie, who provided the news stories, photo and cartoon of the first Punky episode. Art has also tracked down "Gramps" (mentioned in the obit), which he tells me ran as one of the occasional features of the New York Sunday News comics section -- he identified just three episodes having run -- 7/22/1956, 10/7/1956, 4/21/1957.

Comments:
Though I did indeed track down Balk and PUNKY , it was Michael J. Vassallo who found (and scanned) GRAMPS -- Art Loerie

Hi Art --
I keep hoping that Michael will publish his Sunday News index, but his blog just every once in awhile gives us a tiny little taste of his Sunday News collection. Has he published elsewhere, and I've missed it?

There were partial indexess to the Sunday News in later issues of STRIP SCENE. Vassallo has been posting his scans on a FaceBook group, which is not an ideal venue for such things -- make him a weekly contributor! :). The group is called "Sunday newspaper comics 1890-1950"
www.facebook.com/groups/302773136473482 -- Art Lortie

Darn it. I'm totally clueless about Facebook. I tried going to this group several different ways, and I always end up at my empty business homepage (my only presence on that odious timesink). Any help for the technophobic?