Rowland Mount Smith was born in Mansfield, Ohio, on March 8 or 28, 1874. The Ohio, Births and Christenings Index, at Ancestry.com, said the birth day was the 8th and his parents were Elliot Smith and Ella C. Chandler. Smith’s World War I draft card said the 28th and had his full name. The 1900 U.S. Federal Census had Smith’s birth as March 1873.

Artists in Ohio, 1787–1900: A Biographical Dictionary (2000), said Smith’s father was an “ornamental and sign painter, born in Richland County in 1846. He worked in Mansfield (Richland) from 1871 until 1885, then moved to Bucyrus (Crawford), where he was employed by the Toledo & Ohio Central Railroad as a painter of fancy lettering….”

In the 1880 census, Smith, his parents and younger brother resided at 12 Water Street in Mansfield. His father was a machine painter.


The leading social event of the week was the wedding on Wednesday evening of Mr. Rowland M. Smith of Toledo to Miss Ella A. Jones of this city, the charming daughter of one of our wealthiest citizens. The home was resplendent with decorations of palms, smilax and chrysanthemums. About thirty relatives and intimate friends witnessed the ceremony, which was performed by Rev. Homer C. Lyman of the Baptist church. The birds attended by her maid, Miss Laura Bacon, of Prairie Depot, was attired in white satin, while the groom and his attendant, Mr. Charles Smith, wore the customary evening suits. The newly wedded pair left on a bridal trip to points in southern Ohio. After their return they will reside in Toledo, where Mr. Smith is a talented artist on the staff of the Toledo Blade. The guests from abroad were Mrs. A.H. Widney of Weldon, Ill,; Miss Bacon of Prairie Depot and Miss Day of Mansfield.

The 1900 Bucyrus, Galion and Crestline Cities and Crawford County, Directory had this listing: “Smith Rowland M, (Ella A) newspaper artist, h 405 e Charles”. According to the 1900 census, newspaper artist Smith and his wife were Chicago residents at 2507 Indiana Avenue. Artists in Ohio said Smith was an artist with the Chicago Tribune.

The Official Gazette of the United States Patent Office, November 14, 1905, said Smith was granted a patent for his scalp-massage brush.

The 1910 census said Smith’s Chicago address was 6356 Greenwood Avenue which remained the same to the 1940 census. He continued working as a newspaper artist.

In 1914, Smith’s work appeared nationally. He illustrated the Cream of Wheat advertisements that appeared in the April 1914 issues of Ladies’ Home Journal and McClure’s Magazine. Smith was the cover artist of The Poster, also in April 1914. 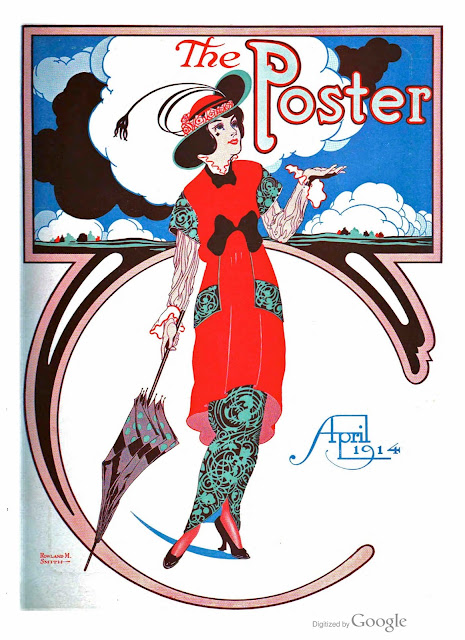 The Pensacola Journal (Florida), April 30, 1914, mentioned Smith’s cover for the Editor and Publisher of April 25. Smith advertised in the May issue of The Poster. 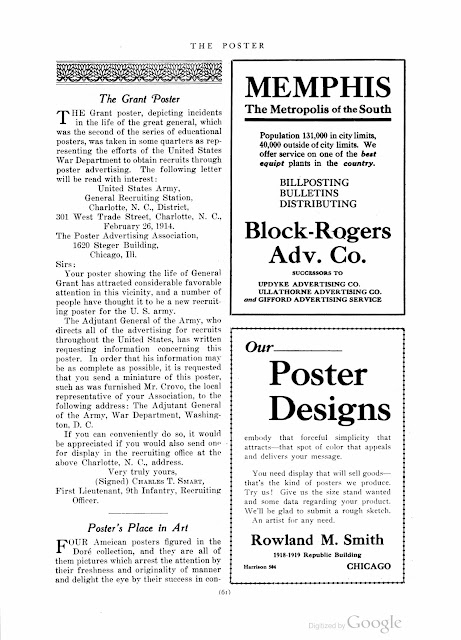 Smith signed his World War I draft card on September 12, 1918. He was described as medium build and height with blue eyes and gray hair. The self-employed artist was producing advertising design at 76 Monroe Street, Chicago.

Smith was doing the same work according to the 1920 census. He has not been found in the 1930 census.

Apparently Smith and his wife were retired in the 1940 census. The household included Smith’s daughter, who was married to “Marshall Cleman”, and granddaughter, Carol. Smith’s son-in-law was a photographer.

What became of Smith is unclear. He has not been found in the Social Security Death Index or an obituary. However, Find a Grave has a Rowland M. Smith who was born in 1874 and passed away in 1955 and was laid to rest in Forest Hill Cemetery.