Wish You Were Here, from Little Nemo 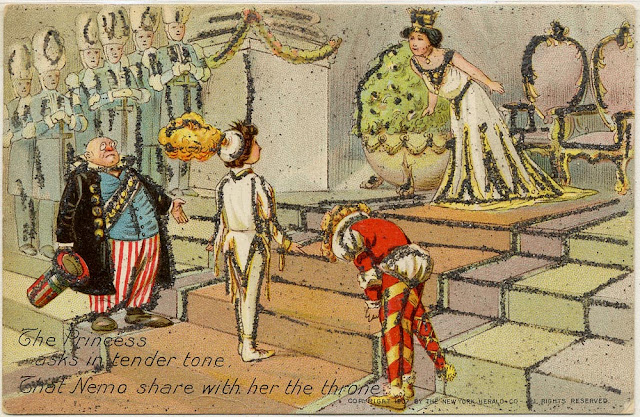 For some reason when Raphael Tuck got the rights to make a set of Little Nemo postcards, they opted to use an artist other than the Greatest Cartoonist Who Ever Lived. While the artist for these Little Nemo cards does an absolutely fine job, why not use McCay?!?!?!

On the postcard back is marked "Raphael Tuck & Sons Little Nemo Series of Postcards No. 6". The "No.6" designation seems to be used to refer to the whole series of cards, as it apparently says the same thing on all cards in the Tuck series. Most of the cards in the series say "Valentine's Greetings" on the front, a reflection on the puppy love romance between Little Nemo and the Princess; however, this particular card in the series doesn't. From a quick search online, it seems there are at least a dozen or more cards in the series.

This card seems to be unusual in that there is applied glitter all over the card -- on the steps, on the guard uniforms, the throne, the princess' dress and so on. Other cards I see online are missing this feature. Did Tuck offer these cards in  a regular and deluxe version?

Comments:
Most likely they got another artist because McCay was busy.

Am I imagining things, or did this artist also change Flip (possible error in name on my part)?

I think that's meant to be the Dr. Pill, not Flip.

Any idea if the entire series were recreations of McCay little Nemo art, as this one was from the July 8, 1906 issue?
http://www.comicstriplibrary.org/display/203
D.D.Degg

I don't know, DD, but neat that you found the comic strip match for this card. I knew the scene looked familiar, but I never took the time to look it up. --Allan