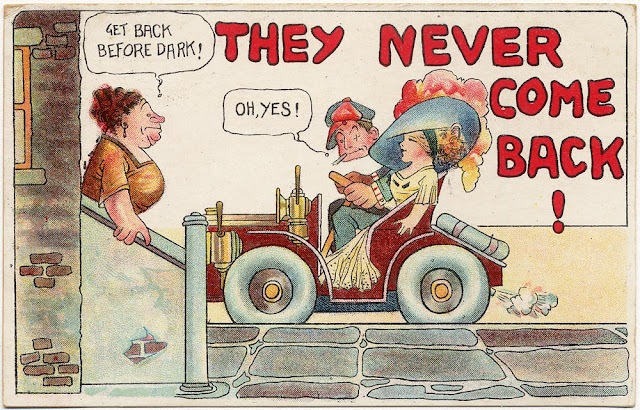 Here's a Carmichael series we haven't seen yet. "They Never Come Back" was issued by Taylor Pratt & Company as Series 728, probably around 1913-14. For some reason Carmichael chose not to sign any of the cards in this later series -- perhaps because he was starting to think of himself as a success as a newspaper artist?

Comments:
Did you notice the car has a British, i.e., right-hand drive, steering wheel? Granted, that's probably a function of showing off the dame, but it is curious.

Seems as if right-hand drive American cars were quite common then:

What are we supposed to understand from this card? They never came back, meaning what? They drove over a cliff and died? They got lost and died? They drove all the way to California because they didn't know how to turn around? They went somewhere and shacked up and had wild animal sex for many decades thereafter? They just went someplace else because they couldn't stand the old lady? They were con artists and were actually stealing the old lady's car? They have no idea who the old lady is, nor why she was speaking to them? They went and robbed a bank and their names are Bonnie and Clyde? In other words — I don't get it.

You should submit it to Comics I Don't Understand. Always thought they should do classics as well as new comics.

Btw, I'd still like to get some details about the Neil the Horse newspaper comic strip from you. Might you contact me at strippersguide at gmail.com?

At this time he had already started dating my Great Grandmother (they married in May of 1914). Family lore is that they met when he was teaching a class at Cooper Union School of Art in NYC in which she had enrolled.
Maybe you are right, between the newspaper and the teaching position he may not have wanted to identify himself on the postcards.
The image of the man seems to be a take on himself. Though the lady and her mother do not look like my Great Grandmother and her mother.
Thank you for posting, I really wish my Grandfather was alive to see it, he really would have enjoyed it!
All the best, APC's Great Granddaughter