John V. “Jack” Collins was born in August 1898 in New York according to the 1900 U.S. Federal Census and his Michigan death certificate. In the census, Collins was the youngest of three sons born to Thomas and Mary. They were in Collins’ maternal grandfather’s household which included three uncles and an aunt. They all lived in Buffalo, New York at 425 Otto Street.

The 1905 New York state census recorded Collins, his parents, three brothers and two sisters in West Seneca, New York at 73 Fifth Street. Collins’ father, a train conductor, was the head of the household that included four relatives and four boarders.

Collins’ mother, a widow, was the head of the household in the 1910 census. Collins, his five brothers and sister were Buffalo residents at 589 Perry Street. The household included his mother’s brother, sister and brother-in-law.

Cartoons Magazine, April 1916, carried an advertisement for the Associated Art Studios that said “Mr. Jack Collins, Sport Cartoonist, New York Evening Telegram. Mr. Collins is 16 years of age and is the youngest Sport Cartoonist in the U.S. His work appears in the Evening Telegram and is on a par with any of the sport cartoonists. Our method secured Mr. Collins this position.” One of Collins’ Telegram cartoons was reprinted in The Outlook, October 23, 1918. 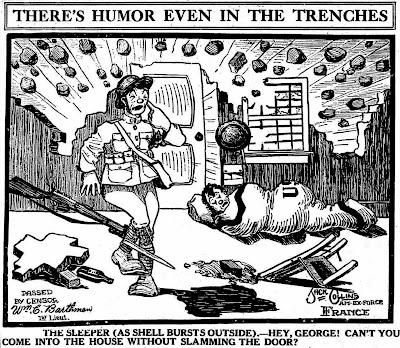 During World War I, Collins enlisted in the New York National Guard on July 20, 1917. He was transferred to the 105th Machine Gun Battalion of the 27th Division. Collins served overseas from May 18, 1918 to March 6, 1919 and was discharged April 1, 1919. The 27th Division produced its own newspaper, Wadsworth Gas Attack and The Rio Grande Rattler. When Collins contributed to the newspaper it had been retitled Gas Attack of the New York Division. Collins appeared in the December 25, 1918 issue, here and here, and in the March 1, 1919 edition here, here and here.

Collins was mentioned in The Fourth Estate, February 1, 1919, which reported on the Christmas issue.

The Christmas number of the Gas Attack, a well edited magazine, published by the 27th American (New York) Division, December, 1918, and written and illustrated on the Western front, has been received in this country.

The publication is dedicated to the land from which the division came—America came and the land in which some of them fell—France.

The foreword is by Major General O’Ryan, with a splendid sketch by an Buren, drawn from life.

The leading article was written by Leslie W. Rowland, formerly of the Pittsburg (Pa.) Gazette-Times editorial staff, who tells what the 27th Division has been doing in France since leaving the training camp at Spartanburg, S.C. last April.

Sergeant Harry T. Mitchell, another former reporter on the Gazette-Times, has contributed several good articles; there is a full-page cartoon by Jack Collins, several drawings by Van Buren, and exceptionally well written stories and poems by various other members of the division.

The magazine contains thirty-two pages and the artistic cover is mauve-gray with black and crimson letters and a drawing of a soldier’ hat filled with Christmas letters. On the back cover is a soldier in a wreath of holly extending “Joyeux Noel.”

In the 1920 census, newspaper cartoonist Collins, two sisters and a brother were in their mother’s household in the Bronx, New York at 2377 Grand Avenue. Collins’ sister, Eleanor, was a “sketcher” at a newspaper.


Funny Strip
Jack Collins, the cartoonist who succeeded Larry Semon on the New York Evening Telegram, is now drawing the daily syndicated comic strip depicting the adventures of Fanny Fillum, the fillum fan. In one of the cartoons Larry Semon appears.

At some point the Collins family moved to Detroit, Michigan.

On February 1, 1926, Collins married Mabel Rineholz in Detroit, according to the Michigan marriage records at Ancestry.com.

The 1930 census said Collins’ mother was married to Jerry O’Brien. Collins, his wife and siblings were part of the household in Detroit at 1977 Oakdale Avenue. Collins was employed as a “stationery fireman” in the construction trade.

Collins has not yet been found in the 1940 census.

Collins passed away October 25, 1942 in Eloise, Michigan according to his death certificate at Ancestry.com. He was divorced.

[Allan sez: if anyone can find "Fanny Fillum" appearing in a newspaper, I'd very much like to hear about it.]

Comments:
I will hazard to guess that Collins move to Detroit might not have been too far after the New York Evening Telegram 1924 merger with the New York Evening Mail. It would not surprise me that the merger cost him his job. If he was unable to get any further work in NYC, he decided to move to Detroit for work, which was booming at the time.
By that time period Detroit was down to three dailies (Free Press, News, Times) with couple other short run dailies rising and falling in the 20s and 30s. It might be possible he originally left for a cartoonist gig in Detroit that didn't pan out. Then found work elsewhere. All speculation though.