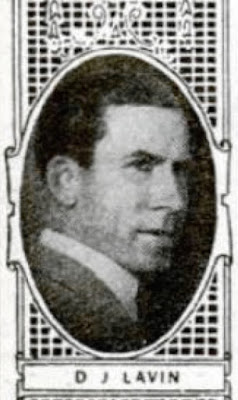 Information regarding Lavin’s education and art training has not been found. According to a 1900 Chicago city directory, Lavin was an artist residing at 5660 Madison Avenue. In the 1901 directory Lavin was at the Chicago American, which became the Examiner in 1904, and lived at 648 65th Street.

Lavin was with the Examiner when he exhibited forty works in the First Annual Exhibition [of the] Newspaper Cartoonists’ and Artists’ Association at the Art Institute in May 1905. In the Chicago Tribune, March 28, 1949, Frank King recalled when Lavin hired him to work in the Examiner art department (see page 14).

The 1910 census did not record Lavin’s occupation. He and his wife had an eight-year-old son, Robert, and employed a housekeeper. They resided in Chicago at 6510 Ingleside Avenue.

Lavin illustrated for a number periodicals including Wayside Tales, The Idler, The Day Book, and The Green Book.

Lavin was an instructor at Chicago's American Academy of Art where one of his student’s was William Juhre.

During his time at the Tribune, Lavin was an avid golfer as noted in The Scoop and The Fourth Estate.

On September 12, 1918, Lavin signed his World War I draft card. He was art editor at the Tribune. He was described as tall, medium build with gray eyes and brown hair.

In 1919 Lavin left the Tribune and joined the the Charles Daniel Frey Company. 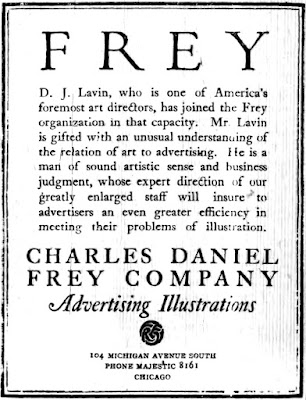 At some point Lavin moved to California. The 1940 Paseadena city directory listed commercial artist Lavin at 335 Parke and the name of his second wife, Hazel. Cartoonist Lavin was at 262 Palmetto Drive in the 1947 directory. The Pasadena directories from 1949 to 1956 had Lavin’s address as 364 Rosemont Avenue.

Lavin passed away June 14, 1958. His death was reported in the Independent Star-News (Pasadena, California), the following day.

Lavin, who resided at 364 Rosemont St., Pasadena, was admitted to the home four weeks ago of treatment of a heart condition.

A native of San Francisco, Lavin was head artist for the Chicago Tribune for many years before coming to California. While here, his work appeared from time to time in this newspaper.

He is survived by a son, R. Preston Lavin, of Chicago, and a close friend, Ernest Spaulding of Pasadena.

Funeral services are pending at the Lamb Funeral Home.