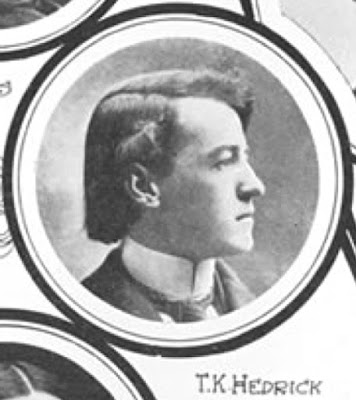 Tubman Keene Hedrick was born in Illawara, Louisiana, on February 15, 1873, according to the Book of St. Louisans (1906). His parents were Cyrus Alan Hedrick and Ella Augustine Travis.

In the 1880 U.S. Federal Census, Hedrick was the youngest of three children. His father was a manager of an unspecified business. The family resided in East Carroll, Louisiana.

The Book of St. Louisans said Hedrick was educated at country schools in Louisiana and at public schools in Mineola, Texas, until 12 years old, and after that he was self-taught. Hedrick was a newsboy at 12, then a postal clerk at 14. In 1890, Hedrick was a contributor to the publications Louisville Courier Journal and Louisville Truth. A 1891 Louisville, Kentucky city directory had a listing for “Keene Hedrick”, a draughtsman at S.C. Gates, who lived at 1824 Brook.

Hedrick spent time in Texas as a railroad clerk in Mineola in 1891. He was a cartoonist for Dallas newspapers from 1892 to 1894 and later, in 1895, at the Houston Post. The 1896 Dallas city directory said Hedrick was a photo-engraver, an occupation mentioned in Cartoons Magazine, April 1917.

The Globe-Democrat in St. Louis, Missouri was Hedrick’s next stop from 1896 to 1903. Hedrick contributed illustrations to Harry B. Wandell’s One Purple Week; and Then— (1898).

Hedrick was in his mother’s household according to the 1900 census. The cartoonist resided in St. Louis at 1382 Lucretia Avenue. In the 1903 city directory, Hedrick’s address was 3502 Pine.

After his stint with the Globe-Democrat, Hedrick was a freelance magazine writer and cartoonist. American Newspaper Comics (2012) said Hedrick produced Mister Hypo for the Globe-Democrat which ran it from June 4 to July 30, 1905.

In June 1904, Hedrick was one of the American Press Humorists at the St. Louis World’s Fair. A group photograph was published in the Inland Printer, August 1904.

In the 1908 St. Louis directory, Hedrick’s home was 5149 Ridge Avenue. The address was 1355 Clara Avenue in the 1910 census. Hedrick and his wife had two sons, Travis and Edward. Hedrick was a freelance journalist. According to the Chicago Tribune, August 11, 1935, Hedrick moved, in 1910, to Chicago and worked for the Daily News.

When Hedrick signed his World War I draft card on September 12, 1918, he was a resident of Chicago at 849 Lafayette Street. He was an editor employed by Victor Lawson. Hedrick was described as short, slender build with brown eyes and dark hair.

Two daughters, Mary and Ella, were listed in the Hedrick household in the 1920 census. The family of six resided at 5640 Kenmore Avenue in Chicago. Hedrick’s home in the 1930 census was the Hotel Broadmoor Apartment, 7606 Bosworth Avenue. 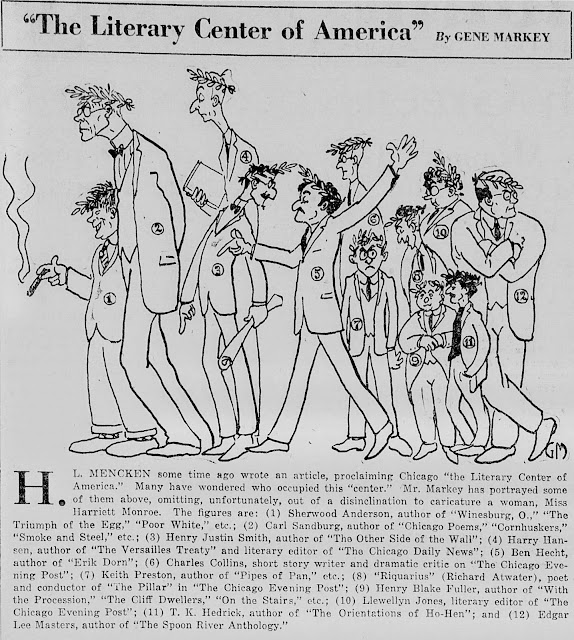 Hedrick passed away August 10, 1935 according to the Cook County, Illinois death index. His death was reported the following day in the Chicago Tribune.

Comments:
Good afternoon. I was delighted to come across this post as TK Hedrick is my great grandfather. In addition to his work as a cartoonist for the Chicago Sun Times, he was also an editor of books about and close friends with Carl Sandberg. He also wrote a book.