Colin Fulda Allen was born in Hammond, Oregon on November 15, 1912, according to his Social Security application that was transcribed at Ancestry.com. The Oregon State Archives also has Allen’s birth date and county, and names of his parents, Frank Lester Allen and Lily Tulda [sic].

In the 1920 U.S. Federal Census, Allen was the oldest of two brothers. Their mother was a widow. They and three roomers lived in San Francisco, California at 1665 Hayes Street.

In 1930 Allen lived at the Masonic Home for Children in Covina, Los Angeles County, California. Artists in California, 1786–1940 (1989) said, “While a student at Covina High School, Allen studied art under Esther Dana and won prizes for his posters and other work.” Allen contributed art to the school’s 1929 yearbook, The Cardinal. 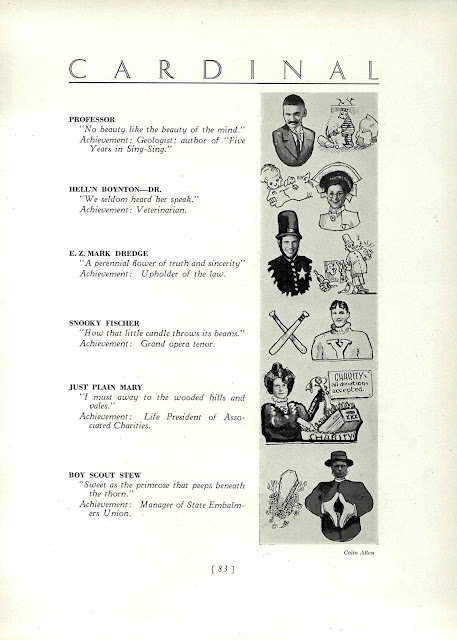 In December 1932, Allen was in Honolulu, Hawaii where he filled out an application for a Seaman’s Protection Certificate. He was 20 years old and described as five feet ten-and-a-half inches, 155 pounds with blue eyes and red hair. Earlier Allen worked as a deck boy on the ship Maunalei from July 13 to August 1, 1932.

From 1935 to 1946, Who’s Who said Allen studied at the Art Students League and Pratt Institute in Brooklyn. He produced magazine and newspaper cartoons and illustrations for the New York Times, the New Yorker, Saturday Evening Post, and others. Allen’s cartoons were published in Judge. Popular Science, June 1948, reprinted one of Allen’s Collier’s cartoons.

The Daily Worker (New York, New York), November 28, 1938, reported the contributions of several artists to a new club, “That new night club scheduled to open within three weeks has all of us excited. Called ‘Cafe Society,’ it will kid the long drawers off its namesake and feature murals by Gropper, Hoff, Colin Allen, Earl Kerkam and others.” Colin talked about the nightclub in Cafe Society: The Wrong Place for the Right People (2009). 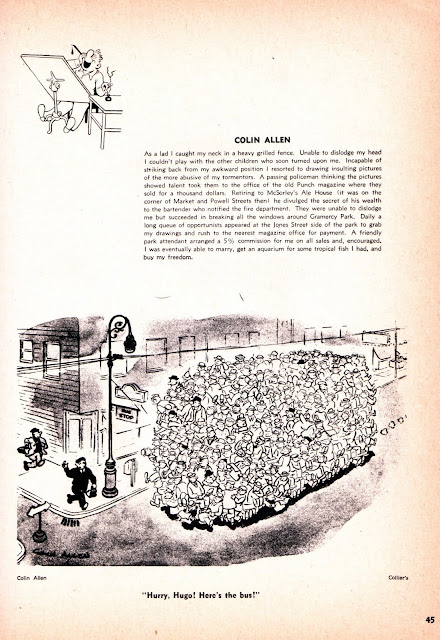 According to American Newspaper Comics, Allen was one of several cartoonists who drew cartoons for Wheaties cereal from 1944 to 1946. Allen produced What a Family* from September 8, 1946 to October 9, 1954. A 1950 issue of the Queens Ledger (Maspeth, New York) said “…Jim Clark, who is spending the winter at Jensen Beach with the comic artist, Colin Allen, with whom he collaborates in producing the full page comic, ‘What A Family,’ which appears on Saturdays in Hearst papers throughout the nation.” Who’s Who said Allen supplied illustrations to Pictorial Review. What a Family and Pictorial Review were handled by King Features Syndicate.

Who’s Who said Allen did experimental work in plastic, metal, wood and photography, from 1954 to 1958.


Colin Allen, cartoonist creator of “Whata Family,” has returned to his Stuart home for the summer months.

He and his wife are announcing the birth of their first son, John, at Sarasota Memorial Hospital. They have three small daughters who provide many plots for his comic strip. He will return to Sarasota Sunday for the christening ceremony.

The Allen family, of Towaco, N.J., in 1949 purchased the St. Lucie Blvd. home and studio of cartoonist Zack Mosley after the Mosleys moved into new quarters on the riverfront in St. Lucie Estates. A year ago they moved to Sarasota due to his difficulty in finding part-time studio help here. The Ringling Art School at Sarasota answered his problem, he said. He also draws illustrations for E.V. Darling’s “On the Side,” and for other columnists. He said he plans to work here while supervising redecorating of their home here in preparation for its sale. The family will join him later.

Who’s Who said his address, in 1959, was 115 Edmondson Street in Sarasota, Florida. TedKey.com  said, “…In the 1960s, Key also did a two-page cartoon chronicling the adventures of a brother and sister named Diz and Liz for Jack and Jill, a children’s magazine…. A compilation of those cartoons was published by Wonder Books, as was a Diz and Liz book written by Key and illustrated by cartoonist Colin Allen.”

At some point, Allen moved to Michigan where he lived in Detroit and Grand Rapids.

Allen drew the cover of the May/June 1986 issue of The Michigan Alumnus.

The Directory of Michigan Artists (2001) included Allen and said, in part, “Mr. Allen is now afflicted with Macular Degeneration and is legally blind.”


* Rebel Visions: The Underground Comix Revolution, 1963–1975 (2002) included Art Spiegelman’s assessment of Allen and What a Family.


During his senior year at High School of Art & Design, Spiegelman [Class of 1965] also became dissatisfied with his instructors. “I used to get really pissed off at my cartooning teacher Colin Allen, a real second-rate cartoonist who had done Lord What a Family, which was a third-rate version of Ride Around Town with Myrtle, which was a fourth-rate version of a Jimmy Hatlo panel. He had done this thing for a living and had done a bit of animation before becoming a high school teacher, and it was frustrating not being able to talk about cartoonists with him because he didn’t know any of the names I was referring to. I was passionate about comics and I felt his lack of interest made him so completely inadequate as a cartoonist and as a person that it was pointless to be in his classroom.

Actually the cartooning instructor was Charles Allen, an African American who drew the panel Tan Topics. He was at the school from 1955 to 1968. The school was originally known as the School of Industrial Art. Charles Allen was in Who’s Who of American Art (1953) and there was no mention of What a Family. American Newspaper Comics said the names of cartoonists Jim Clark, Dewey Clark and BIP appeared in the strip from 1946 to 1949. It’s not known if Colin Allen, who had moved to Florida and then Michigan, was a guest instructor at the school. Class of 1959 graduate, Neal Adams, thought Charles Allen might have drawn What a Family.

Comments:
Colin Allen wrote and illustrated "What A Family'.

Occasionally he hired people to help him come up with 'gags' for the 'strip'.

Charles Allen was one of those people - he worked briefly for Colin Allen.

Charles Allen never did more that work as a gag man for a brief period of time.

He did not take over the strip when Colin Allen stopped creating it.

He came to work long after the strip was formed and left long before it ended.

Jim Clark was not a cartoonist, he was a bartender who helped Colin for a brief period.

Hi Lillian --
Your explanation of the role of Jim Clark and Charles Allen on What a Family is much appreciated. Are you a family member? Any idea who "BIP" might have been?