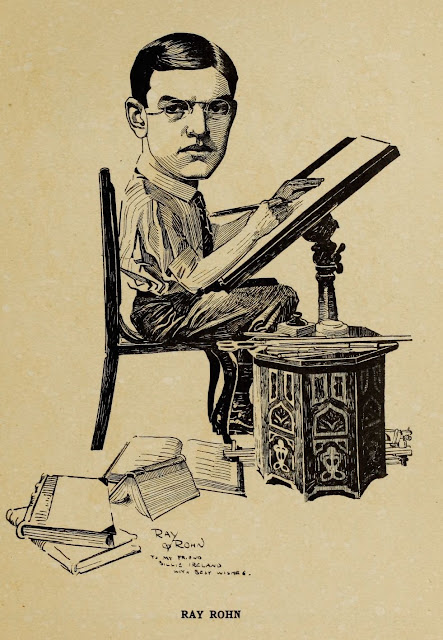 Raymond Walter “Ray” Rohn was born on July 10, 1888, in Defiance, Ohio, according to his World War I draft card and Who’s Who in American Art, Volume 1 (1935). However, Rohn’s death certificate, at Ancestry.com, had the birth year 1887. A family tree at Ancestry.com had Rohn’s full name and said his parents were Samuel Winfield Rohn and Louisa Frances Crandall.

The 1900 U.S. Federal Census recorded Rohn, his parents and older brother Glen in Defiance at 419 3rd Street. Rohn’s father was a salesman. 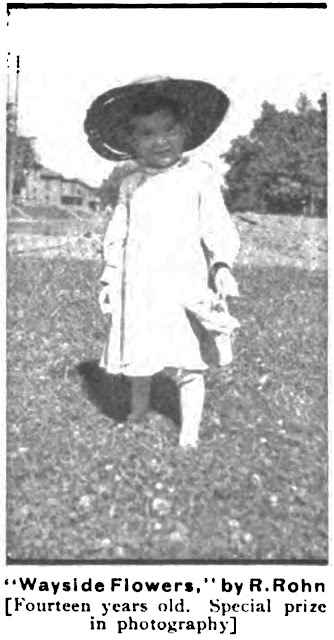 A 1906 Lima, Ohio city directory listed Rohn as a clerk residing at 804 West Wayne. The following year a Cleveland city directory said Rohn was an artist who lived at 1073 East 116th SE. Who’s Who in American Art said Rohn “entered the newspaper field in Cleveland and Cincinnati”.

Rohn was in Cincinnati for a time. American Art News, April 17, 1909, mentioned Rohn as a member of the Cincinnati Art Club.

In the 1910 census, Rohn was a Cleveland resident. The self-employed artist resided at 1954 East 116th Street. One of tenants was Dudley Taplin, a newspaper artist.

The 1911 book, Club Men of Columbus in Caricature, featured the work of Billy Ireland, H.J. Westerman and Rohn.

At some point Rohn moved to New York City.

Cartoons Magazine, August 1915, featured the work of Helena Smith Dayton who made portraits of the “Lochinvar Cartoonist Quartette” of Herb Roth, H.T. Webster, R.M. Brinkerhoff and Rohn who was shown in his Gramercy Park studio. 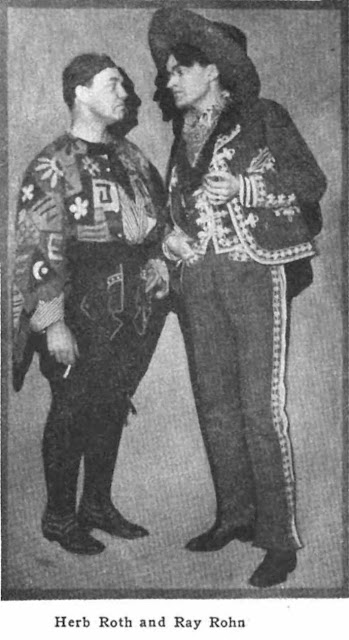 Rohn was a regular contributor to The Green Book Magazine which also published a photograph of Rohn in his studio.

In 1916 and 1917 bachelor Rohn attended the weddings of his friends Webster and Brinkerhoff.

American Newspaper Comics said Rohn drew Bedelia’s Beaus for the Ledger Syndicate in 1920. Who’s Who in American Art said Rohn “was with the Art Department of the Philadelphia Public Ledger for about eight years.”

Rohn’s art appeared in many magazines including Judge, The Saturday Evening Post, The Country Gentleman. and The New Yorker.

American Art Annual, Volume 18 (1921), had an address for Rohn at 514 Walnut St., Philadelphia. The Eastern Edition of Advertising Arts and Crafts (1927) listed Rohn at “518 Walnut, Lom 4477 Philadelphia, Pa. Fiction Story Ill., Cartoons, Decoration, Black and White, Crayon, Dry Brush, Line Drawings, Pencil, Pen and Ink, Wash, Water Color.” The American Art Annual, Volume 24 (1927) had 218 Walnut as the address. The Lithographs of Robert Riggs (1986) said “Riggs was sharing a studio on Washington Square in Philadelphia with Ray Rohn, another illustrator whose works were published by The Saturday Evening Post and Collier’s.”

In the 1930 census, self-employed commercial artist Rohn made his home in Philadelphia at 7155 Anderson Street. The household included his wife, two daughters and mother-in-law.

Rohn passed away July 8, 1935, at his home in in Mount Airy, Pennsylvania. He was laid to rest at Arlington Cemetery in Drexel Hill, Pennsylvania.