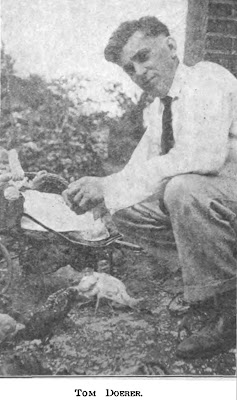 Thomas Alvin “Tom” Doerer was born in Baltimore, Maryland, on July 27, 1889. The birthdate is from the Social Security Death Index. The 1900 U.S. Federal Census recorded the month and year as July 1889. However, his World World War draft card had the year 1888 while the second World World War card had 1892. Both cards had his birthplace.

In the 1900 census, Doerer was the oldest of five children born to Frank, a city fireman, and Annie, an English emigrant. They resided in Baltimore at 111 North Durham Street.

The 1907 Baltimore city directory listed Doerer at 1431 Milton Avenue. He worked at the Baltimore American. Directories for 1908 and 1909 said Doerer was an artist who resided at 2419 East Hoffman.

According to the 1910 census, newspaper cartoonist Doerer and his wife Minna resided in Baltimore at 2512 East Hoffman Street. The couple had been married a year and were part of his father’s household which included Doerer’s four sisters. A family tree at Ancestry.com said Doerer’s mother died in 1910 before the census enumeration in April.

Baltimore directories from 1911 and 1914 said Artist Doerer lived at 2229 East Preston. At some point Doerer moved to Lancaster, Pennsyulvania.


Tom Doerer, formerly of the old Philadelphia Times and Boston Traveler and lately with a Baltimore feature syndicate, has succeeded the late Harry H. Hensel as cartoonist on the Intelligencer. Mr. Hensel was retired under the Intelligencer’s pension system about a month ago and died shortly afterward.

Editor & Publisher, January 27, 1917, reported Doerer’s venture into publishing. “Thomas A. Doerer, formerly cartoonist on the Baltimore American, and R. G. Register, of the Lancaster (Pa.) Intelligencer, have established a monthly magazine called the Jinx at Lancaster.” Intelligencer cartoonist Doerer signed his World War I draft card on June 5, 1917. He and his wife had three children and they lived at R #4 in Lancaster. Doerer was described as medium height and build with gray eyes and black hair.

American Newspaper Comics (2012) said Doerer drew Daffy-Dinks, from May 14 to November 22, 1919, for the Lancaster Semi-Weekly Intelligencer.

Doerer’s fourth child was counted in the 1920 census. Doerer continued as a cartoonist with the Intelligencer.

Doerer produced artwork for the 1920 Franklin and Marshall College yearbook, The Oriflamme. The Lancaster school publication was printed by the Commercial Printing House of Lancaster. The 1921 Lancaster directory listed Doerer as a “printer”.

Doerer made his new home in Baltimore, Maryland. The 1922 Baltimore directory said he lived at 20 Midship Road, Dundalk, and worked at The Sun newspaper. In 1924 Doerer was at 270 St. Helena Avenue.

Doerer was back in Lancaster, according to a 1927 directory listing, at 751 South Marshall. He was a cartoonist with the New Era Publishing Corporation.

The 1930 census recorded Doerer in Philadelphia, Pennsylvania, at 711 Edgemore Road. The advertising artist had nine children.

Doerer was listed in 1934 and 1938 Washington, DC city directories.

The 1940 census said Doerer’s home was in Baltimore at 2321 Lafayette Avenue. The household included nine children although the two oldest ones had moved out. Doerer was a newspaper artist and writer.

On April 25, 1942, Doerer signed his World War II draft card. His address was unchanged and his employer was Leon Golnick of the Golnick Advertising Agency.

A 1958 Baltimore directory said Doerer lived at 912 East 36tth and was the Baltimore News-Post promotion manager.

Doerer passed away September 21, 1972, in Baltimore. He was laid to rest at Most Holy Redeemer Cemetery. The Kansas City Times said Doerer retired December 30, 1967 from the Baltimore News American and “had worked on newspapers in Philadelphia, Washington, Boston, Elizabeth, N. J., Richmond, Va., and Lancaster, Pa.” Some of Doerer’s original art can be seen here, here and here.

Comments:
What a great find! Lovely post regarding Uncle Tommy. Tom was my great uncle. My grandmother was one of the four sisters living with he, Minna and family.

I'd like to link to your article on my blog as I am discussing 'creativity' as part of a blog chain for Writers of Adelaide, a Facebook group.

Nice post. Thomas Doerer was my grandfather. I'll share with my granddaughter who is a budding artist.
Thanks,
Diane Gable

Would Mary Lou Tucker please contact me on facebook. I'm related to Aunt Marie and Uncle George. Thanks