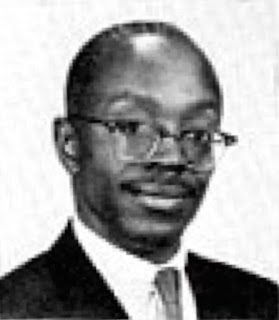 A “Charles E. Allen”, of Americus, Georgia and sixteen months old, was found in the 1920 U.S. Federal Census. I believe he was the cartoonist although the discrepancy of birth years cannot be explained at this time. Allen was the youngest of nine children born to Will, a carpenter, and Irene, a servant. The family lived at 1002 Magnolia Street.

According to the 1930 census, Allen’s oldest brother, Lee, was head of the household that included three siblings and their mother, a widow. They resided in Americus at 617 Dismuke Street.

Sometime before 1935, the Allen family moved to New York City. The 1940 census said Allen’s sister, Georgie, was the head of the household that included the youngest brother, Agustabus, and mother. The family of four lived at 212–14 West 111 Street. Allen’s education included three years of high school and some college.

Who’s Who said Allen attended the College of the City of New York and was awarded a prize in 1941.

Best Cartoons of the Year 1944 printed Allen’s self-portrait, cartoon and profile (above).

Allen provided addition information about himself in Best Cartoons of the Year 1947. 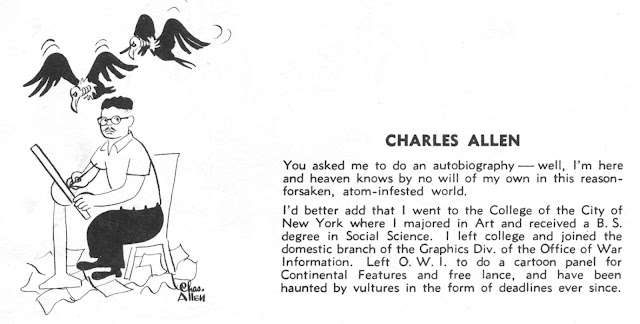 American Newspaper Comics (2012) said Allen drew Tan Topics for Continental Features. The panel began in the Atlanta World on August 23, 1943 and ran for several years. Later the panel continued with Claude Newkirk in the 1950s into the 1970s. In Pioneering Cartoonists of Color (2016), Tim Jackson wrote:


Tan Topics was drawn in brush and ink by Charles Allen (?–?) as a single-panel gag comic. Continental Features distributed Tan Topics nationally during the early 1940s.

The subject matter reflected topics of the day, such as the meat shortages of World War II America and the changing tastes in fashions. Allen’s artistic style improved as the comic preceded. The artist became more daring, adding detailed background scenes, although his ability to draw shapely, pinup-style women generally still left much to be desired. 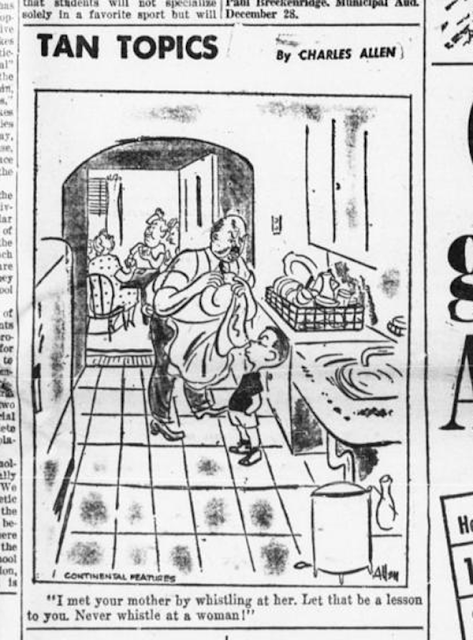 Allen should not be confused with Colin Allen who drew What a Family that ran from 1946 to 1954.

Who’s Who said Allen contributed to Collier’s, Liberty, This Week and other magazines, and was a member of the Artists Guild and the American Society of Magazine Cartoonists. 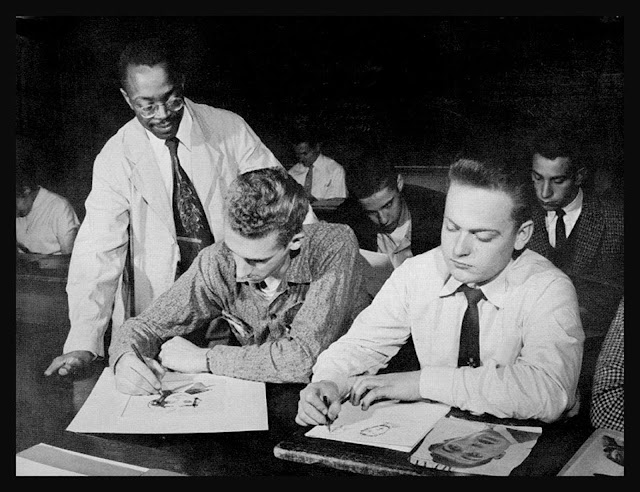 Beginning in 1955, Allen was the cartooning instructor at the School of Industrial Art in Manhattan, New York City. The school was renamed the High School of Art and Design in 1960. Two of Allen’s colleagues were Alvin Hollingsworth and Bernard Krigstein, and his students included Ralph Bakshi (1956), Neal Adams (1959) and Art Spiegelman (1965). Allen’s last year at the school was 1968.

At some point Allen moved to California. He passed away June 8, 1999 and his last residence was San Ysidro, California.